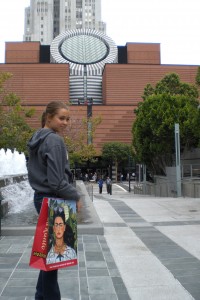 When I told Lulu to smile, she said, “No, I’m Frida” (who never smiled in her self-portraits.)

The other day, Lulu, Mr. T and I went to see the Frida Kahlo exhibit at the MOMA in San Francisco. If you’re local and you haven’t seen it, it closes on September 28, so vaya!  It’s a big show, with room after room of Kahlo’s work. It’s stunning stuff, and I think all those self-portraits make it compelling for young viewers. (Although there are a handful of disturbing pieces of suicide, murder and miscarriage, with plenty of bloody veins. Mr. T. didn’t seem too bothered by those, although after glancing at one he said, “I don’t want to look at that anymore” and wisely moved on to the next.) 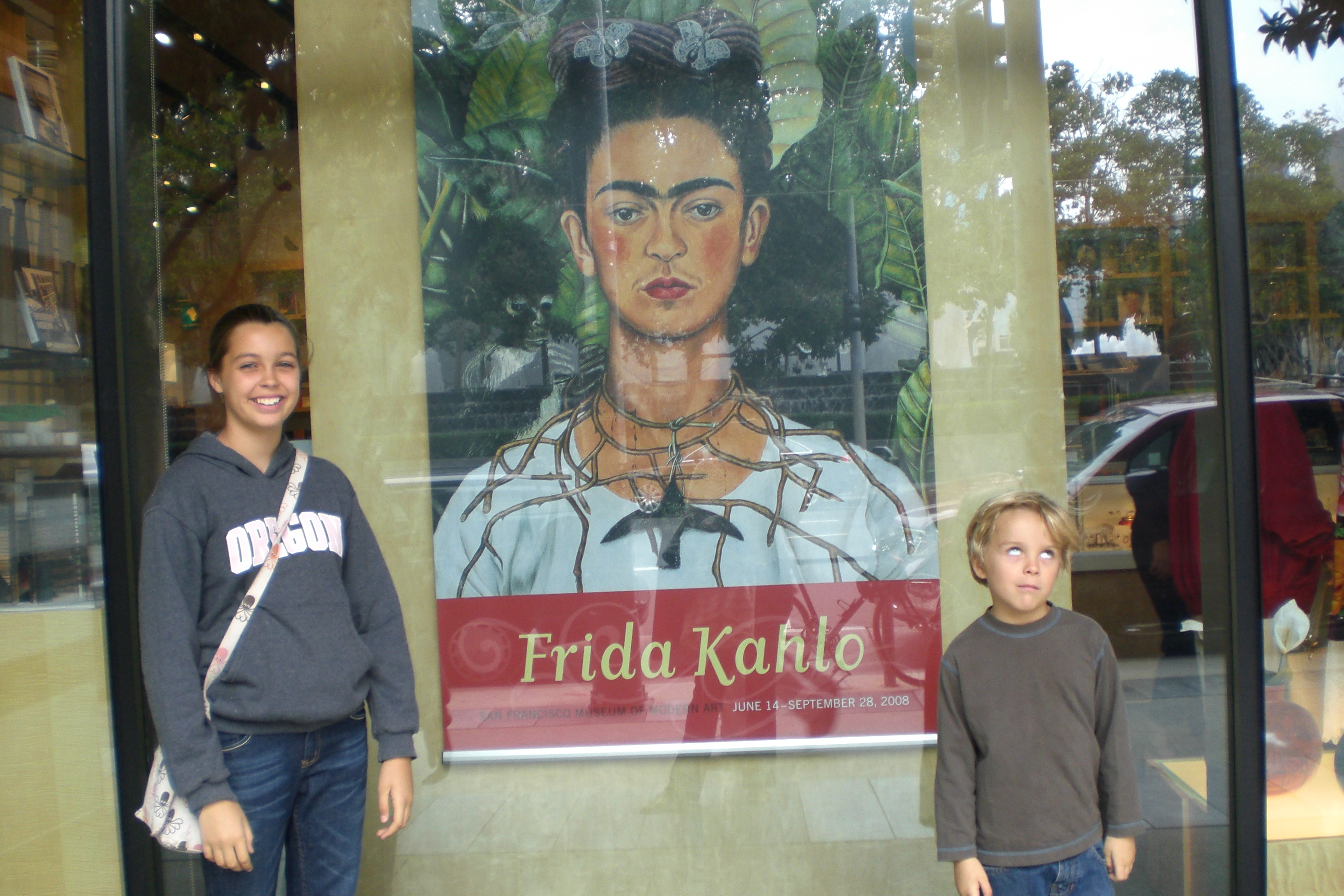 The show was crowded, even on a Tuesday morning. Mr. T couldn’t see the first painting through the crowd when we entered; when he finally got a glimpse and recognized it as the Luther Burbank portrait we’d seen in this book, he pulled on my hand and called, “Look, Mama, look, there it is!” which drew smiles from several nearby onlookers.

Then he floored me by looking at every single painting in the exhibit. Of course, he bounced and bobbed precariously over the wire that guarded each painting as he talked about what he saw. He recognized Diego Rivera in several paintings, and he talked about what different images might mean and also Kahlo’s use of color. (I can’t believe what he’s learned from that Creativity Express program.) Lulu floated around on her own, looking and sketching. 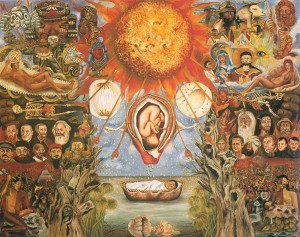 Mr. T spent a good three minutes studying Moses. This is a mural-like painting, supposedly based on Kahlo’s reading of Sigmund Freud. Mr. T spotted the guy with the thunderbolts in the upper right corner and said, “Hey, that’s Zeus.” Then he noticed Ra and said, “I think this painting is about gods.” We talked about the painting for another few minutes. Then he said, “I think I’m done here,” and proceeded to act as you would expect a six-year-old in a museum to act, whining about being bored and hungry and wanting to leave right now.

I’ve always been fascinated to watch my kids’ interests unfold. H was always captivated by sculpture and three-dimensional models; Lulu could sit through a ballet at two. Mr. T seems to have a thing for art, and I’m paying attention. He easily spends an hour each day drawing, a little here, a little there. He doesn’t care much about the product, or having people appreciate what he’s done. For him, it’s all about the process–when he draws he’s in his own world, quietly narrating what he puts to the page.

When he was five, he announced to us over pizza and a big glass of root beer, “Drawing is my life.” Maybe that’s a line to go in the bio at his first gallery show someday. Or maybe it will be something we’ll laugh about, when he turns out to be a car salesman or a stand-up comic. 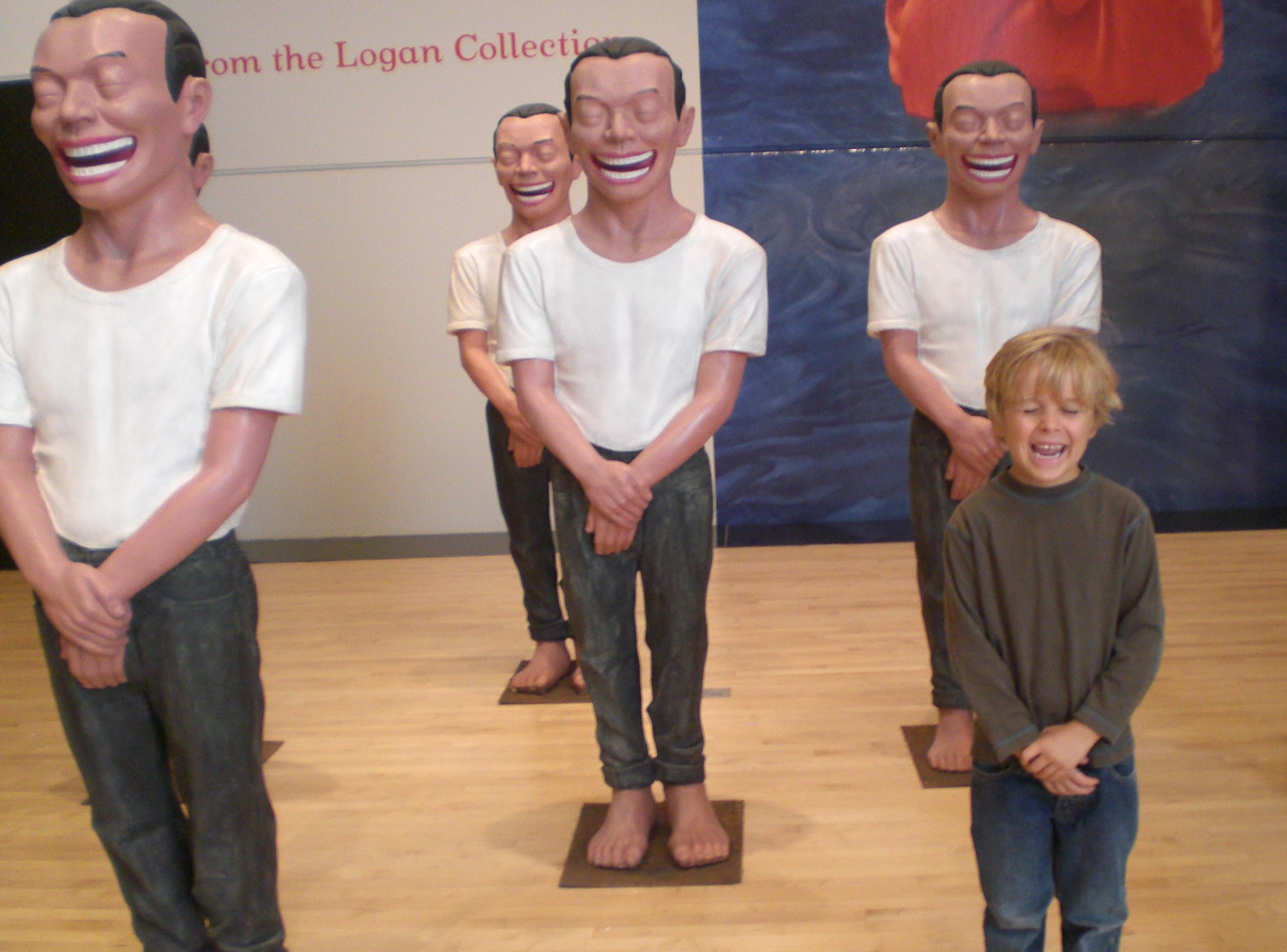 A couple of other good Frida books: Frida and Artists in their Time: Frida Kahlo (the second goes into nice depth for older kids.) I never did see the film Frida, but now I’m looking forward to it.