I know I said I’d write more about teaching school and homeschooling, but it’s birthday week around here, so that post will have to wait. 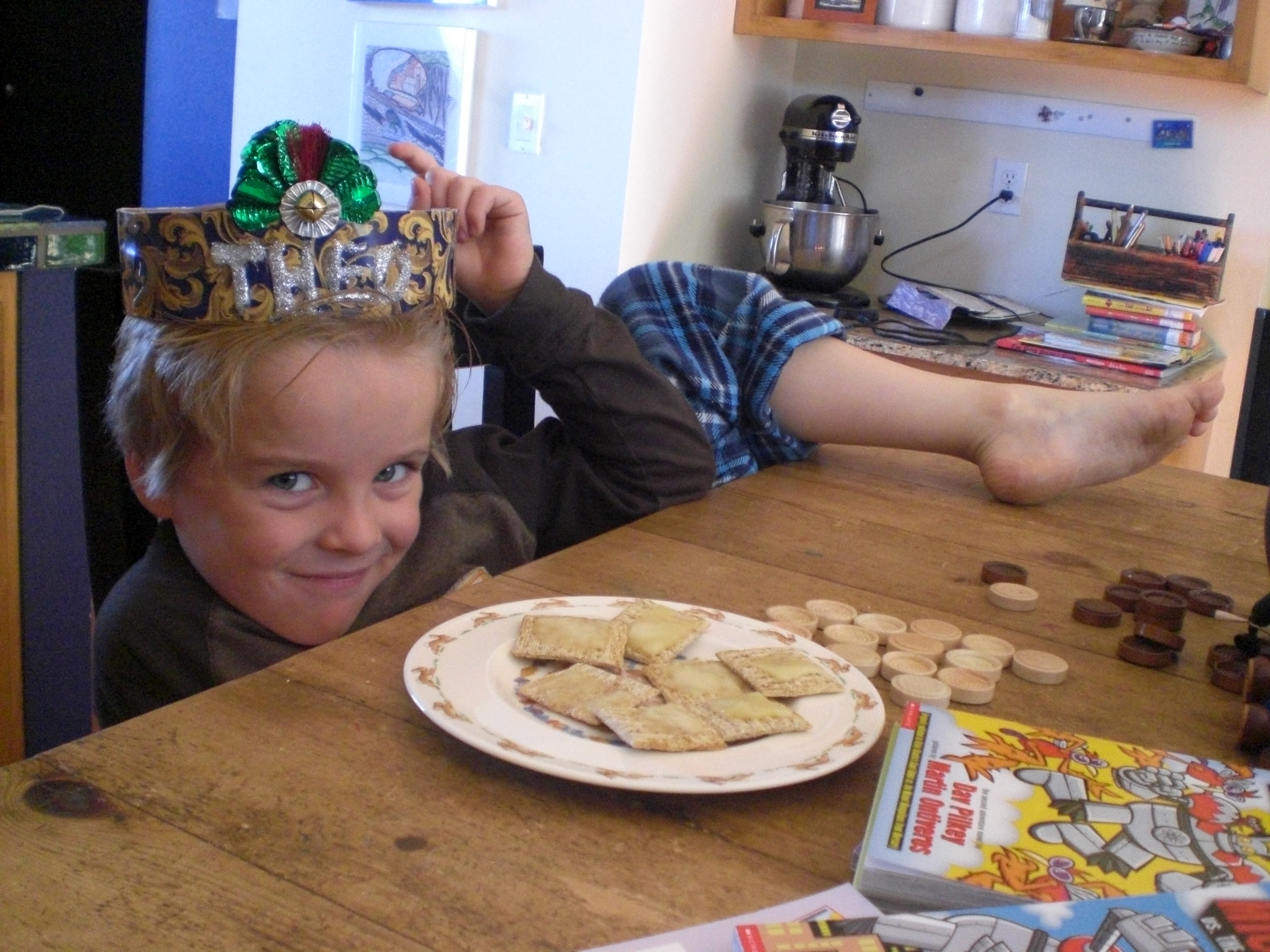 Birthday bliss: a crown made by your sister, some new checkers and Ricky Ricotta books, and eating cheese and crackers from the birthday bunny plate with your feet on the table.

I always get sentimental on my kids’ birthdays, but especially with this guy. He’s my baby. We waited such a long time for him: six years after his sister, and almost ten after his brother. I remember crying on the phone to my mom, worrying that it was taking so long to get a third pregnancy to hold, worrying that a child born so long after his or her siblings would be lonely. My mom reassured me, told me that all of her friends who’d had “later” babies found those babies to be a particular joy.

And that’s what Mr. T has been. Chris and I loved the name we chose for him (and it didn’t hurt that it was also Dr. Seuss’ real name–which now seems especially apt for our little boy with the big imagination). But when we learned that it means “gift from God” we knew that if we had a boy, after waiting so long, this would be his name.

He’s always been a joy and a gift to the other four of us. He entertains us daily with his kooky personality and his laid-back look on life. My parents gave him a card last night that said, “Happy birthday to our weirdest grandchild”, which they meant in the most loving way, really. At his Willy Wonka birthday party the other day, he dressed like Willy–top hat, goggles and all–and insisted that we start the party with the welcome song from the newer movie–you know, the one that goes, “Willy Wonka, Willy Wonka, the amazing chocolatier” about 360 times–so he could do a little welcome dance for each of his friends as they arrived. He’s that kind of a nut. Just the sort of kid who’d choose Willy Wonka as a hero.

It’s funny, parents always say that they grow up so fast. And I’ve felt that with the older two. But with Mr. T it’s been different. Slower. With the other two, I never knew what to expect next, so I think I’ve spent a lot of time looking forward, in both anticipation and worry. But having Mr. T so many years later, I had a pretty good idea what was coming next–and I knew things were bound to turn out okay. (Yes, he’d sleep through the night eventually, and he wouldn’t still be wearing diapers at ten.) So I haven’t spent much time looking forward with him; I know how fast it goes, and I’ve tried to savor every moment of his little boy-ness. Every street crossed holding his hand, every bedtime story read with his head in my lap, every smile with that mouthful of tiny baby teeth, already outgrown. (He just lost his first upper front tooth last week, and holding that tooth in my hand punctured my heart a bit. It felt like I was holding his smile.)

I’ve started reading The Seven-Year-Old Wonder Book to him at night, as I did when each of his siblings turned seven. And I’m grateful that it took so long for him to arrive, because while I now have (almost!) two teenagers skulking around the house, I also have a little boy to snuggle with, who wants to hear fairy stories, who still thinks a wonder book is a wonderous thing.

I’ll leave you with a few more of Mr. T’s wonderings from the Wonder Farm so you too can enjoy the mind of a nutty seven-year-old:

Leave a Reply to suzeeCancel reply