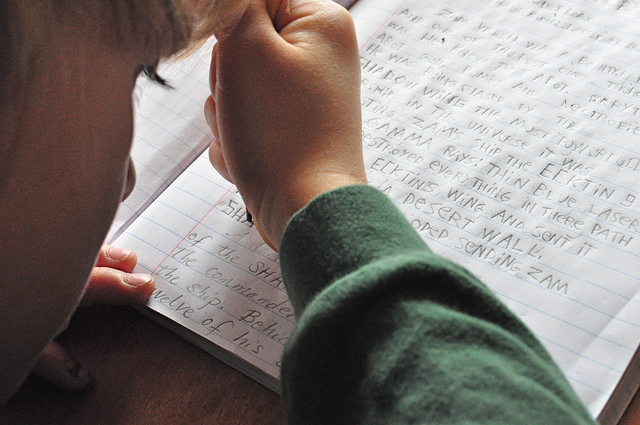 A cooperatively-transcribed story. He dictated part and wrote part himself.

“You gotta hear this,” Mr. T said to me the other day. And then he proceeded to read, “The end of the world started when a pegasus landed on the hood of my car.”

It was the first line from the last Percy Jackson book and it delighted him.

“Yup.” He grinned. And read it again.

Suddenly you have a kid who notices the craft of writing. It’s a fabulous thing.

Any kid who writes might do this. But there is something about taking dictation, I think, that particularly fosters it. When you sit and take dictation from your child, you are privvy to his or her thought processes. You are present as they tinker with lines, or alter the direction of scenes, or try to figure out what comes next. And often they tell you precisely what they’re thinking.

When a child says, “I don’t know what should happen next,” you’re in an ideal position to point out that there isn’t a single solution. That writers constantly make choices as they work. You can encourage your child to brainstorm a few different possibilities. It doesn’t take long for kids to recognize that writing is pliable, and full of possibility. And that they are the masters of it all.

One day when Mr. T was beginning to dictate a story, he said, “It’s gonna be one of those stories that has to have a prologue.”

“Where did you learn the word prologue?” I wondered.

“I don’t know. Magic Tree House or something?” He wasn’t sure.

I was curious. “Why did you decide to have a prologue in this story?”

“Cause there’s a part that’s not about a character. It’s explaining to you what’s going on.”

It’s natural for kids to learn from the literature they love. Again, as their transcriber, you’re in a position to encourage this. When a child is struggling with something in a piece of writing, you might direct her to a favorite author who writes in a similar style. How might Lemony Snicket start a chapter? Or how does Jim Arnosky describe a plant? When I’m stuck in my own writing, I often flip to my own favorite writers for answers. Just reading a few pages can be all it takes to get me going again.

Once kids begin thinking this way, they start noticing what writers are doing in their work. Again, you can encourage this as you read together. I’ve written about how my kids and I are great fans of listening to audiobooks together. I often point out masterful writing as we hear it. Just a quick comment–I’m not trying to annoy them. “I love that word, titter,” I might say. Or, “Ooh, such a good first line!” My kids do it too. Sometimes we have longer discussions. “Stop the story,” T. called out the other day, as we listened to the first Artemis Fowl on disc in the car. The disc got stopped and he announced, “I don’t like Artemis Fowl.” He wasn’t talking about Artemis Fowl, the book, which he’s quite taken with; he was talking about Artemis Fowl, the character. “I like the fairies better.” And suddenly we were chatting about what makes particular characters likable in the story. It was a glorious, impromptu conversation on craft.

I don’t set out to formally discuss literature with my kids. The conversations just happen as we savor good books together. It only takes a few quick comments about what you admire in a piece of writing to inspire comments from your kids. Soon full conversations blaze forth when you least expect them.

We talk about Mr. T’s own writing the same way. After all, he’s a writer too! And after years of this sort of conversing, the sophistication of his insights routinely surprises me.

The other day as he dictated a story, he explained, “I like the beginnings of my stories to be short and not from the main character’s perspective, so it’s exciting. Then I go to a longer part that’s not as exciting when I go into the character’s head.”

Let’s see: he’s talking about pacing and perspective and intriguing leads. All tools of effective writers.

He described more about the introduction of his story. “It’s like the narrator is a ghost, so that secrets that are inside are not revealed. So stuff only happens that if you were there, you would understand.”

Something tells me that this kid will not become baffled if he takes an English class in college, and the professor starts throwing around terms like omniscient narrator and close third person. Not to mention the palpable delight T. takes right now in discussing his craft on the page.

I don’t mean to make T. out to be some sort of literary genius eight-year-old. Not at all. On the contrary, I’ve worked with dozens of kids over the years in writer’s workshops, and I’m always astounded at how quickly they take to and apply the tools of writing to their own work. Flashback. Metaphor. Second person, present tense narration. They talk about these tools; they use these tools. They think like writers because they are writers.

This is a powerful compound. Remember your safety goggles. Prepare to see sparks fly.

So tell me, those of you who have been taking dictation from your kids this month–how’s it going?