We’d talked about going to China as a family last summer, before H went off to college. Our friend, Mike–buddy since high school, best man at our wedding–and his wife Erin and their kids have been living in Shanghai for five years now, and we’ve played with the idea of visiting them ever since. So last year we planned a grand trip to Asia, with stops in China, Thailand, maybe even Cambodia. But after researching costs–high!–and considering that a family of five might be a bit much as house guests, we scrapped the idea and headed to Scandinavia and Germany instead.

But Chris couldn’t get the idea of China out of his mind. When another college friend moved to Beijing with his family last year, the opportunity seemed too good to pass up. One Friday night, over pizza and a bottle of wine, Chris floated the idea of taking a short trip in the spring, just the two of us and Mr. T. Both families in China have kids close to T’s age, which would make it fun for him–plus he’s always been the easiest traveler in the family. H is off at college, and Lulu would have school and drama rehearsals, and probably wouldn’t relish vacationing with so many little kids. We got her (slightly reluctant) blessing, and bought plane tickets. (She stayed home with the help of four loving grandparents and some wonderful neighbors.)

And suddenly we were off for ten days in China.

When it comes to travel, I’m usually the Research Queen. I find snazzy apartments for us to stay in; I make grids of when museums are open; I find and we read every kid book available on the location and the history of the place; and–most importantly!–I study up on the local foods and search out the best restaurants in every neighborhood we’ll visit. This trip was different. We did a little reading and film-watching ahead of time, but not much else. We’d be staying with locals and we decided to just go and let the trip unfold.

Sometimes that’s the best way to travel. When you have no expectations, you are bound to be delighted.

And delighted we were. A few of the highlights:

the people: Although we couldn’t communicate in words with most, the Chinese were lovely. 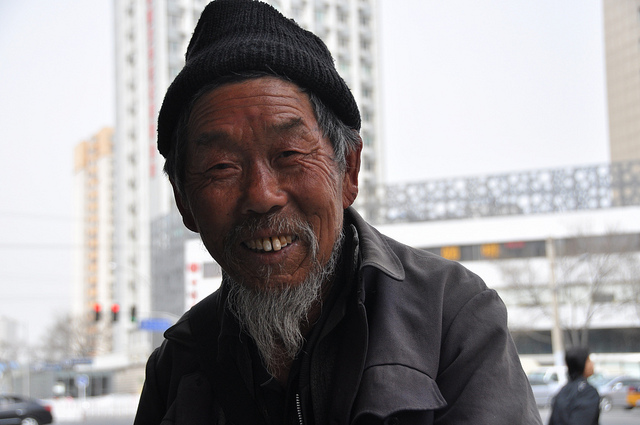 The old ladies worried when the kids weren’t wearing sweaters or socks. (Erin speaks Mandarin. At the park one day, a woman pointed to Erin’s sock-less five-year-old and said the word sock in two different dialects and then said, in Mandarin, Get some!) Chinese men stopped to help us when we were lost, and one serenaded the kids with his heavily-accented version of You Are My Sunshine. 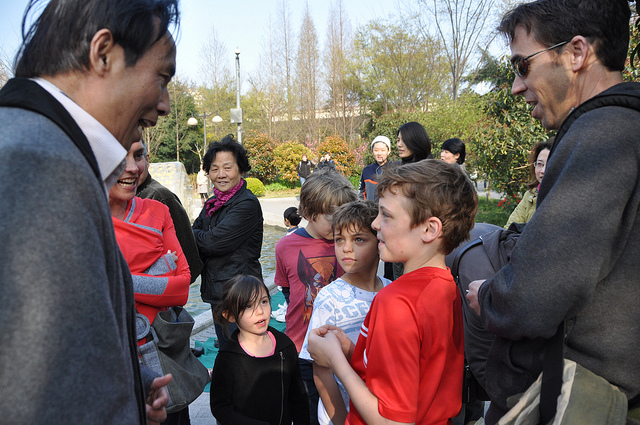 If you could get past the constant spitting on the street (Chris started rating loogie-hocking on a 1-10 scale), the people were more genial than we’d expected.

the food: Yes, there were the oddities that we’d heard about. A Hunan hot pot restaurant featured chopped bullfrog, sheep’s testicles and something described on the menu as Insect Story–a grand platter of grubs, worms and bugs to cook in the simmering broth. 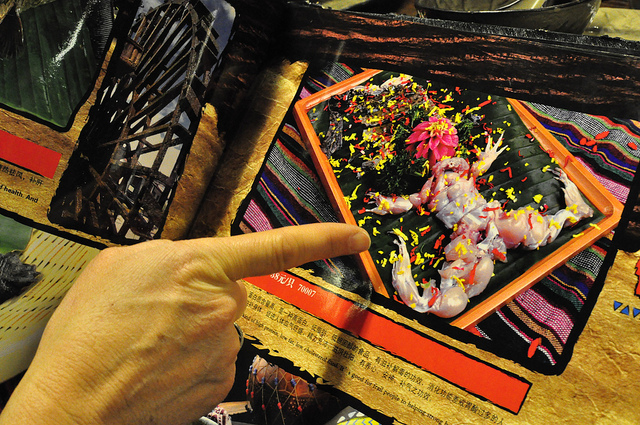 A snack street in Beijing had scorpions still alive and wriggling on a stick, just waiting for a dip in the deep fryer. 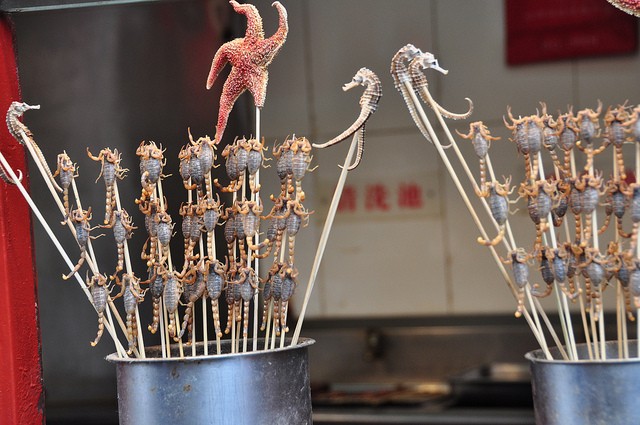 We managed to steer clear of all that, with the help of our local Mandarin-speaking friends, and ate quite well. Delicious noodles with gingery sauces, beautifully prepared veggies, and all manner of dumplings and steamed buns. I learned to make potstickers from Mike and Erin’s ayi (house helper)! 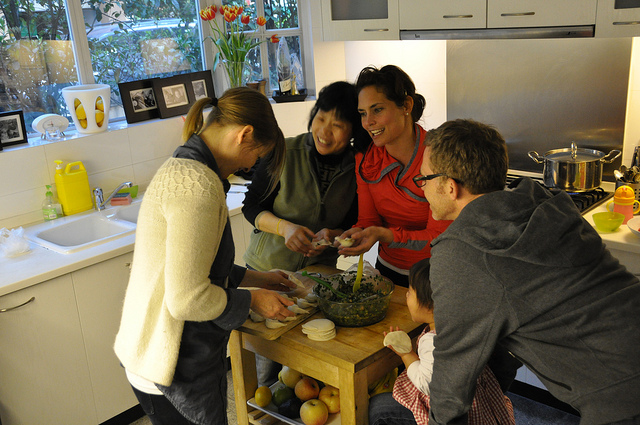 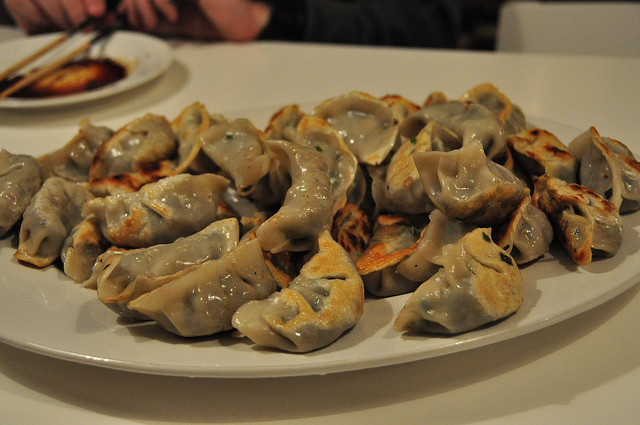 Some of my favorite eats were the street food breakfast crepes called jian bing. They’re large crepes topped with egg, spicy sauce, herbs and green onions, pickled veggies and folded around an unexpected fried wonton-type cracker. Sizzling hot, crisp, fresh and so tasty! The best were from a wet market in Shanghai; they were so good that Erin and I went back a second day in a row, taking a taxi just to buy a bunch more and bring them back to the house. 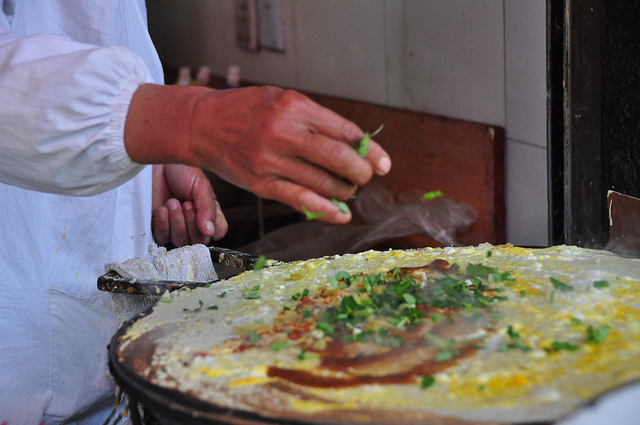 the ex-pat life: What an interesting lifestyle! Both Mike and our friend Paul in Beijing work for American and European companies. They live in compounds full of Americans and other foreigners; their kids attend international schools—and learn Mandarin, of course. The kids play soccer in leagues, and act in school plays. Ex-pat families can shop at international groceries that carry everything from Annie’s Mac and Cheese to Kettle chips. Eating dinner at Mike and Erin’s house the first night, we felt like we were at their old house in Portland, Oregon. Their home is hip and beautiful–Mike’s a designer–and full of quirky touches like this one: 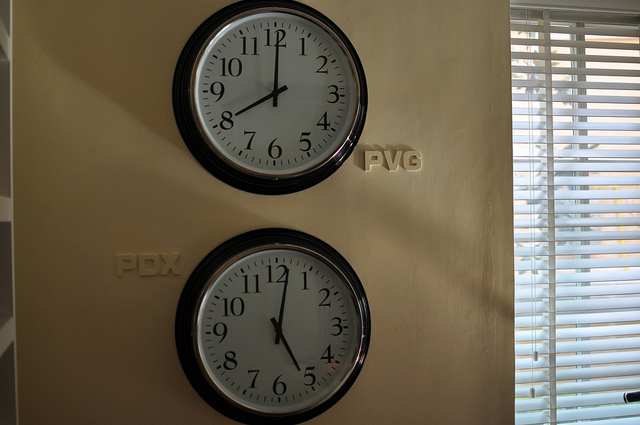 (PVG is the airport in Shanghai; PDX the one in Portland.)

The kids scooter and bike around the compound; neighbor kids drop by for pizza and a jump on the trampoline. So there we were, feeling very Portlandish one night, only to leave the compound the next day to the completely foreign world of Shanghai! What a way to grow up: on the one hand, the kids live in a foreign country and are immersed in that new language and culture, while at the same time they’re able to hold on to the culture of their home country.  It’s such an alternative, fascinating life, and I couldn’t really fathom it until I’d seen it myself.

the scope of Shanghai: Comparing the skyscrapers in my local San Francisco to the skyscrapers of Shanghai is a giggle. San Francisco has a skyline, sure: a few dozen tall buildings clustered mostly in the Financial District. Take that cluster and multiply it by…what? Five hundred? A thousand? In Shanghai, the tall, crammed-in buildings go on for miles and miles. Driving through, it looks less than real, like some CGI rendition of a city in a futuristic film. The population of Shanghai is 22 million (according to wikipedia) so I suppose I shouldn’t be surprised. Beijing has a similar population, but it’s more spread out, and the buildings generally aren’t as tall. We went to the top of the World Financial Center in Shanghai, which, at 101 floors, is the tallest observation deck in the world. It had glass floors so you could see down to the roads below. Generally heights make my knees go all noodle-like, but we were so high that it didn’t even seem real. Like the view of Shanghai in general. 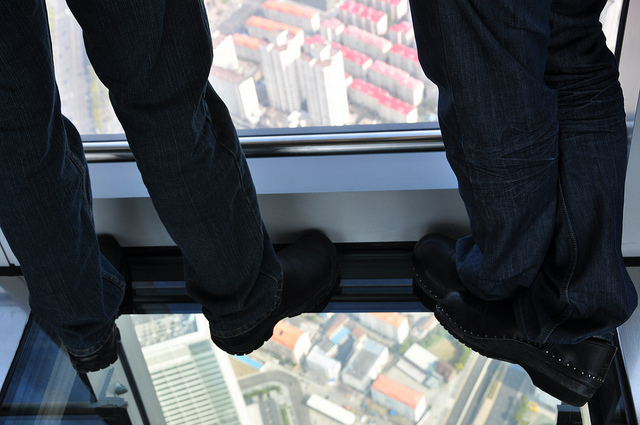 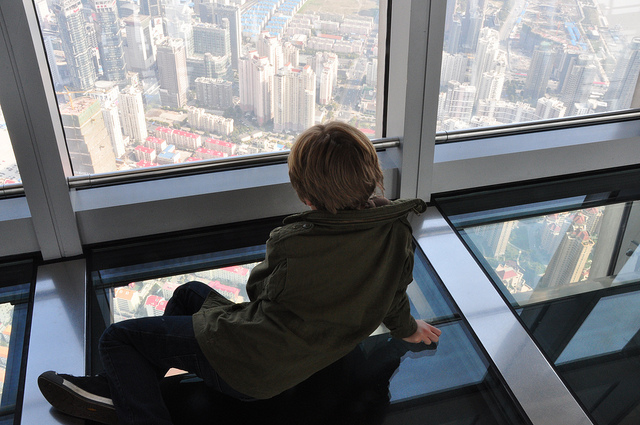 the Great Wall: When I told people we were going to China, a good handful said that walking the Wall was an item on their bucket lists. Hiking there does feel monumental. Chris and I had imagined it being flatter; the Mutianyu section that we visited had lots of ups and downs, and made for a surprisingly strenuous workout. As you walk, you see the Wall snaking ahead of you, distantly into the mountains, just as it stretches behind you in the opposite direction. 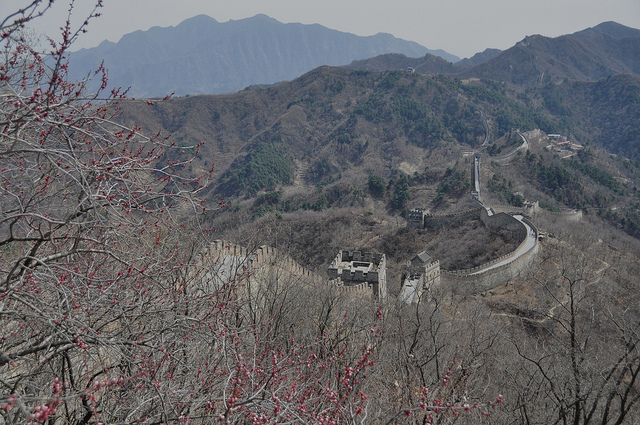 It looks so endless—and then you remember that you’re only seeing a miniscule portion of the whole. T and new buddy, Ryan, son of our Beijing friends Paul and Stacey, had a fabulous time creeping around, looking for “Mongols”. We were lucky enough to be there on a weekday, when it wasn’t crowded. Sure it was touristy—at the Wall’s entry we ate jian bing which were literally ten times as expensive as the tastier ones in Shanghai, and we rode a kitschy summer toboggan sled down from the top—but there’s no denying the magnificence of it all. 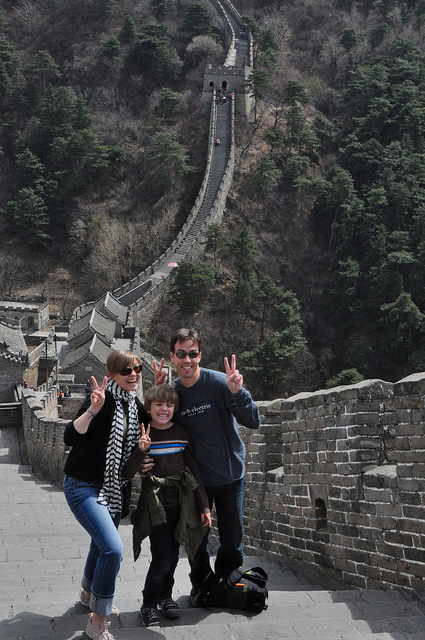 walking in the neighborhoods: I especially enjoyed wandering through the French Concession in Shanghai, and the hutongs (old courtyard neighborhoods on narrow alleys) in Beijing. All those tree-lined streets, and beautiful, chipped-paint doorways leading into secret dwellings behind. Of course, when you catch a glimpse into those doorways, you discover the primitive, cramped conditions in which many Chinese live, and that gives some perspective to it all. Still, after all the high-rises, it’s nice to walk the old single story streets. Like zooming in with a camera lens. 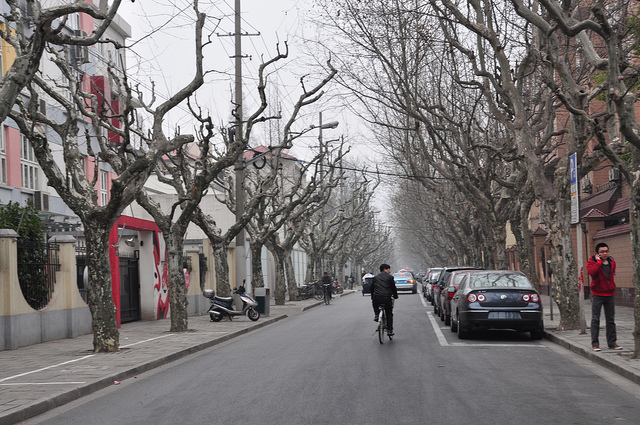 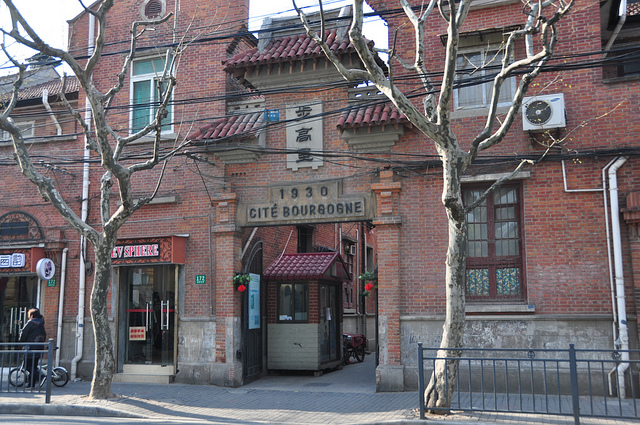 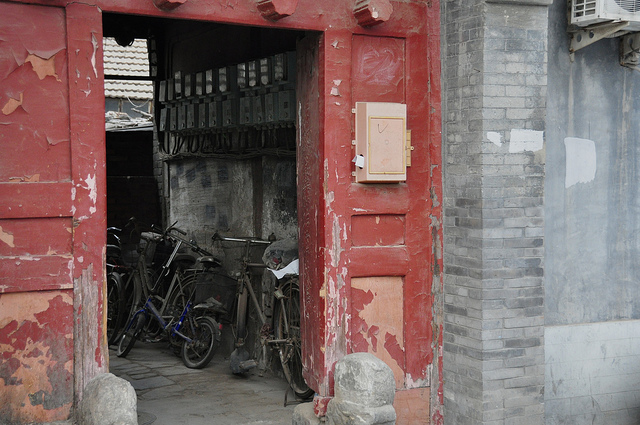 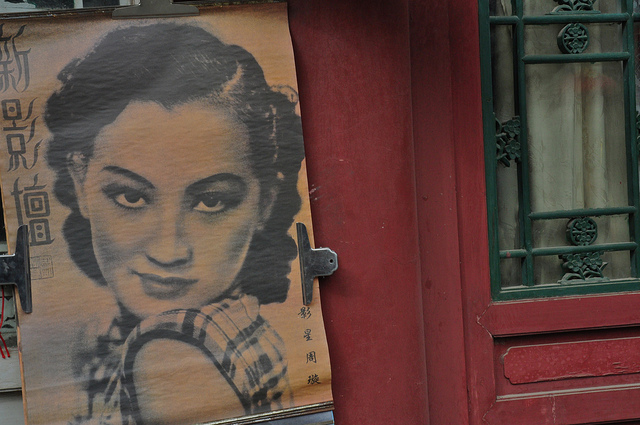 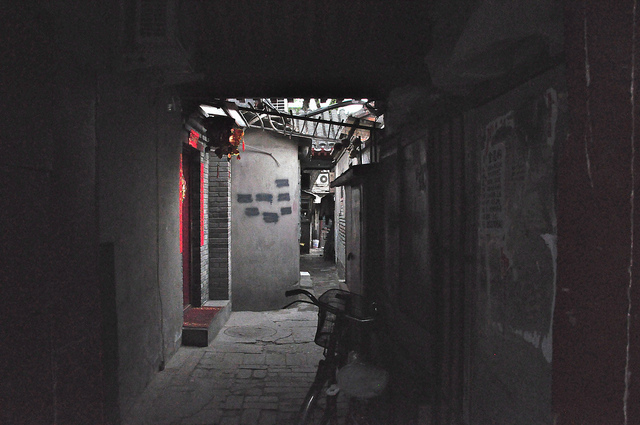 chinglish: The Chinese translations of English on signs and menus never fail to entertain. Check out this list of rules for a Shanghai park to see for yourself. Ethic and moral codes should be duly honored! 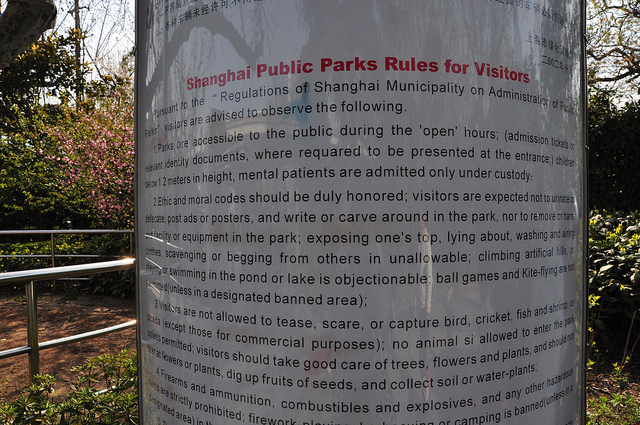 And this roll of paper towels was enough to make me pull out the camera in a bathroom: 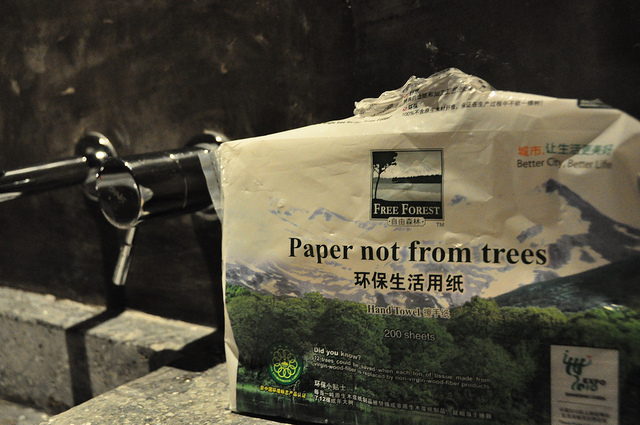 my kid as a tourist attraction: Everywhere we went, people took pictures of T. Many did it on the sly with their cell phones, others came right out and asked in gestures or limited English if they could pose in a photo with him. 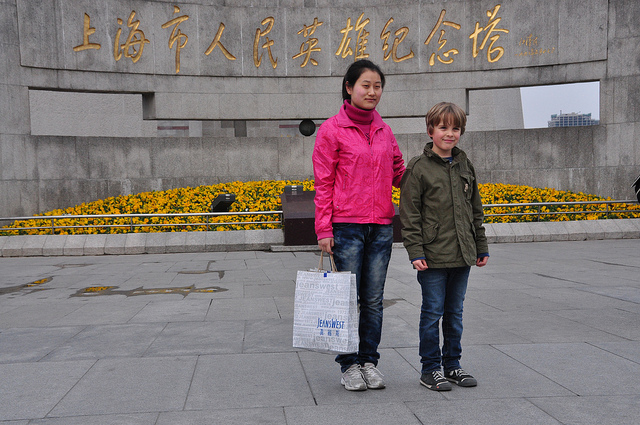 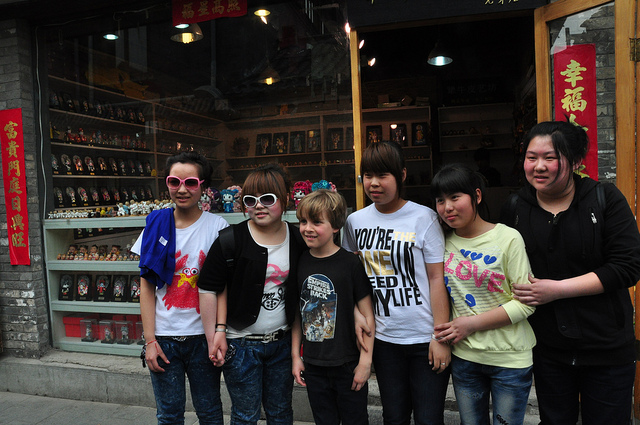 Blonde, blue-eyed kids are a rarity in China. T got the most attention in touristy places like Tiananmen Square in Beijing or Pudong in Shanghai. My guess is that many of the tourists in those spots are from remote areas of China, where they see fewer foreigners. Eventually T took to walking down streets greeting everyone with ni hao (hello)!  The Chinese seemed to get a kick out of this, and T always got a friendly ni hao in return.

It was lovely. As was the entire trip. When you have no expectations, you are bound to be delighted.

(There are more photos on my flickr page if you want to peek.)