three days of reading and writing: an incomprehensive list 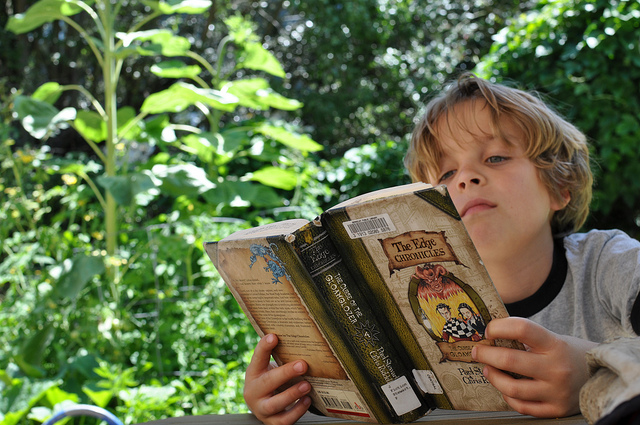 Oh, what  a crazy time it is. Mr. T turns ten today, and Lulu turns sixteen on Halloween. Multiple cakes and celebrations are involved. Also, I’m trying to fabricate a Thor costume primarily from duct tape. But that’s the sticky stuff of another post.

I haven’t managed a post here in a few weeks. But after writing my last one, on making reading and writing enjoyable on a daily basis, I undertook a little experiment. For a few days I tried to note whenever I saw Mr. T involved in an act of reading or writing. There is no way I caught every occurrence; who knows how often the kid picks up an atlas when he ought to be putting on his pajamas, or labels a map before running out to the backyard?

THREE DAYS OF READING AND WRITING: AN INCOMPREHENSIVE LIST

Lots of independent random reading. A Cartoon History of the Universe, Volume 3. Assorted comics and graphic novels. The Story of the World, Volume 4. (T found this one on a shelf in our office and picked it up when he saw that it covered WWI and WWII, two eras in which he’s interested but we haven’t explored together. Cracks me up that he chose to immerse himself in what some would consider a textbook.) House Mouse, Senate Mouse by Peter J. Barnes.  Scholastic Almanac 2011 and National Geographic Kids Almanac 2011. Interesting thing about T: he doesn’t tend to read many novels, although he loves comics and graphic novels. For a short while I worried about that, until I realized that for every novel he doesn’t read, he probably reads a dozen nonfiction books. He especially loves atlases and almanacs, and all manner of science and history books. At the library, I check out armloads of books that might intrigue him and leave them lying around the house. I strew them, as Sandra Dodd would say. I’d wager that a giant chunk of T’s knowledge has been gleaned from strewn books that he’s picked up and read.)

Family bedtime read-aloud: Wildwood by Colin Meloy. (Because Mr. T’s parents are Decemberists fans and we lived in Portland for a time.)

Daytime read-aloud: Adopted by Indians by Thomas Jefferson Mayfield. This is a bit of an aside, but I have to share: Mr. T and I are exploring California history this year, and going on monthly trips to historic sites with a few other families. We’re reading this book along with our study of local native people. So interesting! It’s the true story of a Texan boy who came to the Gold Rush with his family, and was taken in by a local tribe. Apparently Mayfield never told his story until just before he died, and a teacher-friend transcribed it for him. It’s fascinating to hear about San Francisco before it was even called San Francisco, and to hear what the Central Valley looked like when it was practically untouched.

Bedroom audiobook: The Fellowship of the Ring by Tolkien. This is the book of the month for T’s book group. T would never have the patience to read it at this point, so I checked out the audio version for him. Sixteen disks! Actually, T often “reads” his book club books via the audio version. Is this cheating? I don’t think so. Can T engage in a discussion on the book at his meeting? Yep. Seems like that’s the point.

Car audiobook: The Evolution of Calpurnia Tate by Jacqueline Kelly. T almost always chooses the audiobook we listen to in the car; I really wanted to hear this one so insisted on picking for a change. What a fantastic first-person narrative! Reminds me a lot of the young female narrator in the recent film version of True Grit. Calpurnia uses lots of wonderful, old-fashioned words that should never have become lost to us. Big surprise: T likes it, especially the admiration for Darwin and the natural world that Calpurnia and her grandfather share.

An information packet about Fort Ross, a local historic site and the location of an upcoming living history overnight that T and I will be attending. T’s taking a class with other kids who will be attending the trip. Reading the packet was an assignment for the class, yet T kept dragging his feet about getting it read. Instead of nagging him, I read the packet aloud. Suddenly he found the content fascinating and it prompted all sorts of discussion. And I reminded myself that reading aloud is sometimes what it takes.

Reading about Lego Ninjago online. To some parents, I suppose, this could seem like frivolous commercialism. The thing is, T isn’t reading because he’s lusting after the toys. (Although he wouldn’t mind a few of the small sets for his birthday.) No, what interests him is the Ninjago world and all its inhabitants and their interactions. (How do I know? I asked.) It may be online reading, commercially produced, but still, T is reading and absorbing and considering the information. Pretty much the same as he does when he reads an interesting book.

Practice questions for upcoming Geography Bee. My young geography freak is considering entering a local bee, so he and I took turns reading and answering questions from last year’s bee. And yes, he puts me to shame.

Discussion while reading The Elements by Theodore Gray. T loves this book, and picks it up regularly. This time, as he was reading, he piped up: “You know why I like this Elements book? It has really good writing. It’s complicated, but they simplify it so much that you can understand it. It feels like the writer is talking to you, like when he says, (reading aloud): If you find this section too technical, feel free to skim it–there isn’t going to be a quiz at the end.” A casual conversation about writing style in a scientific book, begun by a kid? Love it. (Another aside: Recently I asked a friend’s 13-year-old if there were any nonfiction books with writing she admired, and she also named The Elements. Good stuff.)

a variety of Google searches:

Are Google searches writing? Most definitely, I would argue. In order to search successfully, you need to refine your goals and tinker with your terms. The ability to find information is crucial for kids in this digital world.

Continued work on his nonfiction piece on Lego Universe for our Writer’s Workshop. T is just beginning to type some of his writing on his own, and is very motivated to do it. Exciting.

The Workshop itself. Practically two hours of discussion about writing! Also a writing exercise: Think of something you like to do, and make a list of how to do a great job at it. T’s subject? Playing Lego Universe, of course. (Third aside: yes, yes, I’m still working on that e-book about how to facilitate writer’s workshops! Will get it up here in the next few months!)

A questionnaire for developing his Fort Ross character, required for the Fort Ross class. Not writing he wanted to do, and he did a minimal job.  I had to encourage him to move beyond one and two-word responses. (What do you look like? Handsome!) Still, I didn’t push too hard; I think that would have only made him dislike the activity altogether. This goes to show the difference between assigned projects and self-chosen ones, like the Lego Universe writing mentioned above. I’d hate to think of how T’s writing might (or might not) be developing if he were in school and not given many opportunities to write on topics of choice.

Many lists of invented characters and maps of invented worlds. I find these scattered around our house like dust bunnies.

Writing and responding to friends in the text box while playing Lego Universe.

A thank you postcard to his grandparents.

Funny thing is, these were three very busy days, three days in which T and I had minimal time working together. Still, I’m amazed at how much reading and writing actually took place. I also notice that most of the examples here fall outside the scope of traditional reading and writing instruction. Reading comic books and Lego websites? It’s reading! Googling Thor and messaging while gaming? Writing! There were times in which I helped T out, scaffolding the learning for him: reading aloud when he didn’t want to read something, finding audiobooks when reading was challenging, not pushing too hard on a class assignment. Also, there were many small acts of reading and writing: casual conversations, Google searches. Sometimes I think we parents don’t notice these small moments, but a reading and writing education can be built on them.