the rule of three 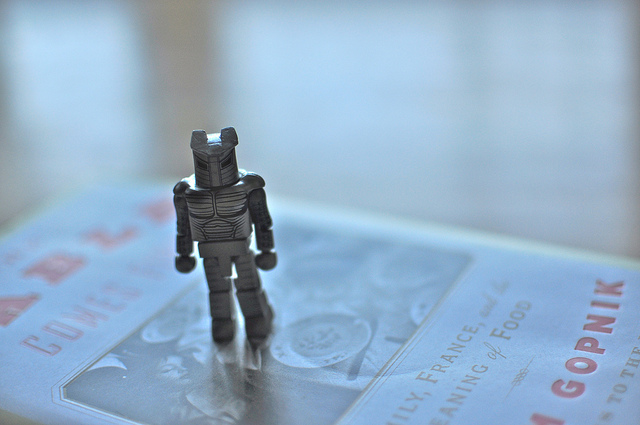 I’m reading Adam Gopnik again. This time it’s his new book, The Table Comes First: Family, France, and the Meaning of Food. Gopnik on food and family! I’m reading it slowly, savoring it like it’s a little goat cheese crottin. Some of it is the deep-thinking Gopnik-ish stuff that has me skimming, feeling too dumb to follow–the history of the restaurant, for example, gets awfully philosophical–but much of it is simply delicious. May I share a few lines, about Gopnik looking into a beehive with a keeper?

“The beehive sits at the center of the roof. Dave opened it, cautiously, and we looked in together. It was like looking down into a New York office building from above: several thousand bad-tempered coworkers racing around and muttering.”

Yes. Exactly. I will never open a hive again without seeing secretaries.

Some of my favorite sections are the “emails” that Gopnik addresses to Elizabeth Pennell, a nineteenth-century British food writer. These sections are casual and chatty and full of Gopnik’s adventures in making the likes of butterscotch pudding and a henhouse-worth of roast chickens, including “the lemon-up-the-bum chicken beloved of British cooks.” It’s like sitting at Gopnik’s table with a glass of Rhône, and watching him simmer and yammer.

But I’m getting distracted. What I really want to focus on is an idea Gopnik writes about in one of his Pennell missives: “the rule of three.” First he uses it to summarize cooking:

Then he starts applying his rule of three to art, and this is where it gets interesting.

“I suspect that this is so because the rule of three really expresses the three stages that are always at the base of any good thing we make, from soup to David Salle: there is first the raw thing, then there is the transformative act, and then there is the personal embroidery. The rule of three applies, because it captures an enduring truth of life, that, at best, people always have three terms to play with: what I take from nature, what I’ve learned from my tribe, what I do myself: nature, culture, me. Something borrowed, something done, something only I can do.”

Reading this, as I pedaled away on my stationary bike, had me instantly thinking of another favorite writer, Michael Chabon. The truly devoted Wonder Farm reader may remember me writing this, way back in my year of excellent essayists:

There’s something about the way Chabon combines his Pulitzer Prize-winning style with the most base cultural references that captivates me. In his essay on Legos—one that had particular resonance for me as the mother of two Lego-loving sons—Chabon writes, “Time after time, playing Legos with my kids, I would fall under the spell of the old familiar crunching. It’s the sound of creativity itself, of the inventive mind at work, making something new out of what you have been given by your culture, what you know you will need to do the job, and what you happen to stumble upon along the way.” That making something new of what you have been given by your culture is a big part of Chabon’s genius. It’s precisely what he does in these essays, again and again. (It’s the same sort of creative, culture-twisting that I love to see my kids fiddle with, that I’ve written about in my Waldorf Guilt posts.) Chabon gives hope to a woman of his age who aspires to write, but worries about the conceit of such an intellectual aspiration given the amount of time she spent watching Brady Bunch reruns as a child.

Rule of three! Chabon starts with not nature, per se, but the canon of literature. Then he adds what his culture has given him, which might be Legos, or might be (as I noted in that post) Squeeze Parkay margarine, Wacky Packages, or the Planet of the Apes television show from the 70s. Then he loops it all together as only he can, with wit and lyric.

And then, still pedaling, I suddenly thought of a third writer. (Because, of course, there must be three when writing of threes.) The third? Mr. T. Last week he struggled to come up with something new for our writer’s workshop. We bandied about lots of ideas, until he finally came up with this scenario: a Colossus shows up at the Downtown Oakland Whole Foods. Written up as a newscast. An excerpt:

Reporter: So what exactly happened in there, Mary?

Mary: It was horrifying! The Colossus fell from the ceiling from the second story elevator platform and landed on hundreds of orange boxes! Then a sample-lady offered him a chocolate heart for anyone special in his life! He threw the sample-lady into a fruit salad display and ate the chocolate! And no, Tommy, you can’t have a Popsicle just because you saw a Colossus!

Reporter: Sounds intense! So Mary, what did the Colossus look like exactly?

Mary: It was almost sixty feet high so that it was skimming the roof! It was made entirely out of metal!

Tommy: Mom, it wasn’t just metal it was bronze! It was AWESOME!

Mary: I just hope there aren’t any more Colossuses!

I’ll spare you the part in which the Colossus starts eating shopping carts, including one with a strapped-in baby. (Never fear: The baby shoots back into its mother’s arms from a hatch in the Colossus’ stomach.) I will tell you that Mr. T had a splendid time writing this story. And you know where this lane in the grocery store is heading, don’t you? Rule of Three. Mr. T started with the canon: Greek mythology and tales of the Colossus of Rhodes. Then he added something given to him by his culture: shopping at Whole Foods (curse of the privileged urban child.) And then he shook it all up into his very own concoction.

It’s a light, fluffy concoction, yes. A fun trifle to write and read aloud to his friends. But I think it’s more than that, too. T. is making art on his own terms, as Gopnik does, as Chabon does. He’s reflecting on the canon, applying modern life and twisting it all in his own way. When we simply ask kids to write straightforward, formulaic responses to literature, or to nonfiction topics, we’re forcing them to skip a step. We don’t allow them to reflect on how the original material relates to their own worlds, and their own ideas, and the resulting writing is typically flat. It lacks the inspiration of art.

Which is why kids should be allowed to write about the banal trappings of their culture, if that’s what inspires them. Whether that be Plants Vs. Zombies or Quentin Tarantino films or Littlest Pet Shop figurines. Teenagers writing about Romeo and Juliet should be allowed to reflect on gangs and Facebook-official relationships. If you doubt that this sort of writing is valuable, allow me to direct you back to Daniel Pink’s book A Whole New Mind: Why Right-Brainers Will Rule the Future. Do you remember those aptitudes that Pink says we’ll need in the future, specifically the aptitudes of symphony and story? (If not, my synopsis is here.) Those are the aptitudes that kids will develop, if allowed to romp in the playgrounds of culture and their imaginations.

Mr. T is planning a whole series of tales of Greek monsters in modern-day locations. I can’t wait to read his spin. It’s fun, but it’s important too. After all, as my man Gopnik writes, “The rule of three is the rule of making.”