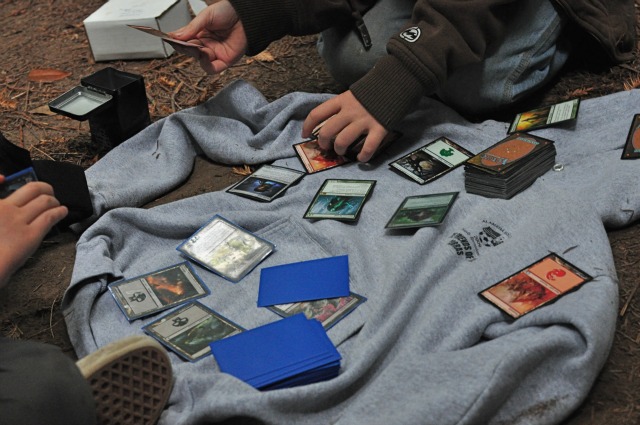 “The Boros are kind of like the military, the peacekeepers, the law folk. Their founder was Razia, an angel…”

This is the kind of thing my kid says these days, as he follows me around, talking. He’s smitten with the card game, Magic the Gathering, and his conversations are pretty much all Magic, all the time.

I try to listen to what he’s saying, even though it can be hard. It’s easier to listen with one ear, to keep my own thoughts working in the other side of my brain, and to simply nod my head when his lines seem to end with the lilt of a question. Still, I try to listen with both ears. I try because this is what matters to him, and he wants to share it with me. There’s something lovely in that. Once you have teenagers who talk to you less, you become better at appreciating younger kids who want your ear constantly. The time for those talks is fleeting.

I’ve also come to realize that those conversations on topics of passion make writers out of kids. You may remember that in my article How Do Kids Really Learn to Write, one of my recommendations was to talk about what interests them. Yes, even on subjects which may numb your mind, like Magic the Gathering, or Minecraft, or Power Puff Girls.

Let them talk to you, and really listen to what they say. Here’s why:

If your kids talk to you about something they’re interested in, they’re likely to want you to understand it.

This may not happen if you do that one-eared listening thing, but if you actually try to listen with focus, and react with appropriate responses, kids will pick up on your interest. They want you to be interested. They will begin tailoring their conversation to an audience: you. Which leads to my next point.

When kids direct their words to a particular audience, it may shape what they say.

They consider your previous knowledge, and modify what they share. When Mr. T talks to me about Magic, for example, he knows that I understand some concepts like mana, which is the game’s energy cost. But I may not know the particulars, so he says things like, “For example, Elf Decks tend to have a lot of mana.” Kids may also notice if they’re losing your attention and may subsequently shift what they’re saying. They ultimately learn to speak to a particular audience, you, which is very much like the skill of writing for a particular audience—a crucial ability for a writer.

When kids talk about their passions, they’re enthusiastic.

Their lines will be lively, animated. This is the same sort of vividness that you’ll want their words to have, eventually, when they write. Kids will have an easier time writing vividly if they’ve had a lot of experience speaking that way. (And you’re not likely to find this enthusiasm if your kids only write from someone else’s prompts.)

When kids speak about a passion, they speak with clarity and detail, because it’s a topic they understand deeply.

They will likely include examples to help you comprehend. They may employ language and lingo particular to the topic. And they will learn to use this language and lingo in way that makes sense to you, their audience. They will learn to define when necessary, and let context convey when it can. For example, T told me, “Some cards are overpowered, meaning that their power is higher than their cost.” Also, since kids know what they’re talking about, their words are likely to be clear and purposeful. Detail, examples and clarity are all qualities necessary to good writing.

When kids speak about a topic they understand, their sentences tend to flow naturally and logically.

One idea leads organically into the next, as their words follow their thoughts. Kids may use transitional words without thinking–I’m always tickled to hear Mr. T incorporate the word however when describing complicated Magic ideas. The more practice kids have speaking on complex topics, the easier it will be for them to write on complicated topics with the same natural, logical flow.

Speaking about what they care about can help kids figure out what interests them most about the topic.

Discussion often leads to more specific areas of intrigue within an interest. As T talked to me about Magic, he continually came back to the notion of how to build a good deck—and he eventually decided to write a Deck-Builders Guide. This topic was rooted in an honest desire to communicate information to me; it wasn’t a canned topic. Kids who have the experience of refining their thoughts via conversation may hold on to this skill when they begin writing. They may find it useful to talk through a topic to narrow it down before they write. (Talking to someone—or even myself—is a technique I use often to get started in my own writing. It’s been helpful to all three of my kids as well. Please see my post My Handy-Dandy Process for Helping Kids Write Nonfiction Based on Other Sources for a practical method of using conversation to delve into research-based writing.)

Because your kids want you to be interested, you can ask clarifying questions based on your own curiosities and confusions.

In conversation, your kids won’t likely see your questions as criticisms, but as honest curiosity. When a child begins to write, these same questions may be help them refine their writing. Yet when it comes to writing, such questions often feel like criticism and a parent’s call to improve the work (in a way that the child may not want to improve it.) If you establish this sort of questioning-when-curious practice with your kids when they speak with you, they may be more willing to let you do the same when they write. They may perceive your questions as a natural, curious response to know more, rather than a threat to revise. If you’ve developed a good rapport in discussions, your questions may lead your child to choose to revise.

Ultimately, these conversations can be a fantastic transition into a writing project, as happened when Mr. T let that talk with me inspire his Deck-Builders Guide. Most of the time, though, our talks are just talks, with no underlying agenda. I’m simply offering an ear (or two) to my enthusiastic kid, and he’s welcoming me into his wacky, wonderful inner world.

And even if he doesn’t realize it, he’s becoming a better writer all the while.

What do your kids like to talk about with you?