“most of what you think you know about writing is useless” 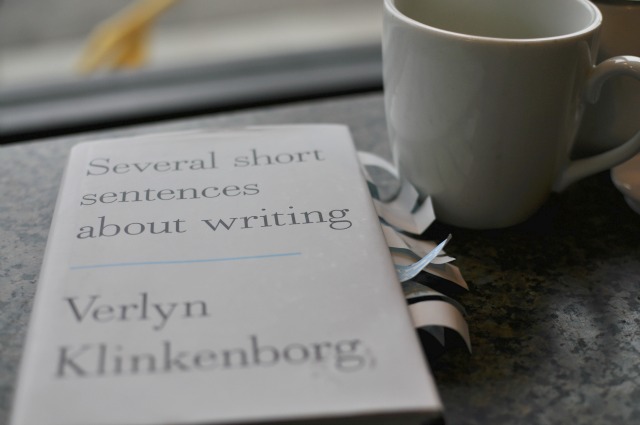 About a month ago, I flipped open a book I’d requested at the library. The front flap introduced itself like this:

“Most of what you think you know about writing is useless. It’s the harmful debris of your education—a mixture of half-truths, myths and, and false assumptions that prevents you from writing well.”

I had a feeling I would like the book very much.

I’d requested Several Short Sentences About Writing by Verlyn Klinkenborg because it’s a book of writing encouragement for would-be adult writers. As a self-taught writer, I’ve learned a great deal from such books. And this is a lovely little one, written in a unique style almost like a prose poem. I began festooning it with page flags immediately, since I couldn’t use a highlighter in a library book. The first flag found itself here, on page one of the prologue:

“What I’ve learned about writing I’ve learned by trial and error, which is how most writers have learned. I had to overcome my academic training, which taught me to write in a way that was useless to me (and almost everyone else).”

This is how I learned to write, which is why I call myself self-taught. Hooked, I read on and came to this:

“With luck you were read aloud to as a child.
So you know how sentences sound when read aloud
And how stories are shaped and a great deal about rhythm,
Almost as much as you did when you were ten years old.”

Read that again. You know almost as much as you did when you were ten. The point being, of course, that kids who grow up in homes rich with literature intuit what makes writing work. A point, you may notice, that I’ve been trying to drive home here on the WonderFarm. It did not take long for me to recognize that this book might be useful to people other than would-be writers. It might be useful to parents. The sort of parents who, perhaps, read this blog.

“Children read repetitively and with incredible exactitude.
They demand the very sentence—word for word—and no other.
The meaning of a sentence is never substituted for the sentence itself.
Not to a six-year-old.”

I know that you are all the sort of parents who indulge your kids by re-reading picture books until your eyes blur. So I know that you know this is true. Klinkenborg is saying that children understand writing beyond superficial meaning. Children value each single word and the role it plays.

Klinkenborg on what likely happened to you in school:

I began to think of all of the homeschooled kids I’ve known, who did not write much as young kids, but who suddenly took on writing as pre-teens or teens, and displayed a skill that belied the inexperience behind it. The inexperience with writing, that is. These were kids who had a good deal of experience as readers. I’m guessing they still trusted that experience.

Suddenly I realized that Mr. Klinkenborg was saying, in a most lyrical way, many of the same things I have tried to tell you, in posts like this.
I bought my own copy of his book so I could use my highlighter like I itched to.

“Were you asked to write in order to be heard, to be listened to?
Asked to write a piece that mattered to you?
Was there ever a satisfactory answer to the question,
‘Why am I telling you this?’
Besides ‘It’s due on Monday’?

You were taught the perfect insincerity of the writing exercise,
Asked to write pieces in which you didn’t and couldn’t believe.
You learned a strange ventriloquism,
Saying things you were implicitly being asked to say,
Knowing that no one was really listening.
You were being taught to write as part of a transaction that had
Almost nothing to do with real communication.”

You remember this, don’t you? How school writing was required and topics were assigned? How the pointlessness of it all probably made you dislike writing–and even worse, confused you about what good writing is?

And do you remember me telling you that kids needs authentic audiences for their writing? Audiences beyond Mom and Dad?

“Start by learning to recognize what interests you.
Most people have been taught that what they notice doesn’t matter.
So they never learn to notice,
Not even what interests them.
Or they assume that the world has been completely pre-noticed,
Already sifted and sorted and categorized
By everyone else, by people with real authority.
And so they write about pre-authorized subjects in pre-authorized language.”

Our kids know what interests them!  Let them write about it. Even if they want to write about Pokemon or My Littlest Pet Shop or the character development of Bruce Banner.

“You were bored from the start and for good reason.
You were repeatedly asked to persuade or demonstrate or argue,
To reiterate or prove or recite or exemplify
To go through the motions of writing.
You were almost never asked to notice or observe, witness or testify.
You were being taught to manage the evidence gathered from other authorities
Instead of cultivating your own—
To stimulate logic
But not to write so clearly that
What you were writing seemed self-evident.”

When kids write about their interests, the acts of observing, witnessing and testifying are built in. The kids have already observed deeply; they’ve witnessed at a microscopic level. They burn to testify to what they know. They have a lot to say.

“You were taught in school to repose on the authority of the evidence you gathered,
The resplendent figures you quoted.
You remember those papers filled with great lumps of quotation.
Your sentences piloted around them like a ship among icebergs.

The icebergs give me goosebumps. Not because of the apt arctic simile, but because I remember my school papers and those icebergs of quotes. The real goosebumps come with that last line, though, with that small, italicized you. Don’t you want this for your kids? Here’s the thing: kids who read and are read to, kids who are left to write about what matters to them, and aren’t taught too much about how to do it, will naturally write vivid, quotable lines. It’s what kids do, when they haven’t been taught to do otherwise.

(And I see the irony, too, in pasting so many of Klinkenborg’s quotes here, icebergs in their own right, with my little sentences sailing in between. I’ve already written about the stuff of this post, though, many times. I’m simply trying to let Klinkenborg convince you, in case you don’t believe me.)

“What we’re working on precedes genre.
For our purposes, genre is meaningless.
It’s a method of shelving books and awarding prizes.

Every form of writing turns the world into language.
Fiction and nonfiction resemble each other far more closely than they do any actual event.”

Which is why I have told you not to get hung up on assigning various genres and writing formats to your kids. Engaged writing is what matters. Let them write in the genres they like. Kids who have learned to manipulate words for their own purposes will be able to handle any format thrown at them.

“And yet good prose often sounds spoken
As if the writer—or the reader reading aloud—were saying the sentences.
(This isn’t the same as sounding colloquial.)
But the arc of education—and the arc of emulation—are usually
Away from spokenness and toward the unspeakable,
Toward longer, more convoluted sentences
Using more elaborate syntax and more jargon-like diction.”

How do you help your kids write good prose that sounds spoken? They can do this quite naturally, from a young age, if you take dictation from them. Dictation will help them develop clear, lively writing voices. It may keep them from muddling up their writing with prose that attempts to sound smart while saying nothing of substance. Curse of the traditionally schooled writer.

“In school you learned to write as if the reader
Were in constant danger of getting lost,
A problem you were taught to solve not by writing clearly
But by shackling your sentences and paragraphs together…
Why were you taught to dwell on transitions?
It was assumed that you can’t write clearly
And that even if you could write clearly,
The reader needs a handrail through your prose.”

This is but a single example of the dangers of over-teaching writing. Klinkenborg delves into many ill-advised rules and pointless techniques that have been piled upon students in the guise of writing instruction. Techniques which adult writing students must shake off in order to learn to write well.

If you are a parent trying to help your kids become writers, you would do well to teach less. Your teaching is likely to be a replay of the bad writing instruction you received. You may ask, if you don’t teach, what can you do? You might help your kids recognize when their writing is successful:

I’m convinced that one of the most useful acts we can do for novice writers is to help them recognize what they’re doing well. I devote a good chunk of my upcoming book to the benefits of positive feedback for young writer’s workshop participants. (The book is coming! November!) I argue that positive feedback can be more instructive than criticism. As Klinkenborg points out in that last line: It’s a guide and an incentive to making more good sentences.

These are just a few of the short, wise sentences that Klinkenborg shares in his book. I’m not sure it’s kosher that I’ve copied so many of them here. I hope I’ve made you hungry for more, and that you will consider buying the book. (And you won’t want a library copy if you are inclined to underlining or highlighting. I have never highlighted a book so. At least not since college.)

The book would be a wise purchase if you are an adult who wants to write better.

It might help you start your kids on the right path, so they don’t grow up and need to begin again, teaching themselves how to write.

(Edited to add: I forgot to mention that the second part of the book contains exercises that may be particularly useful to a parent who aims to raise writers. Klinkenborg includes passages from some wonderful literature, and poses useful questions for the reader to consider, beyond the unhelpful do you like it? This section could give you ideas for discussing literature with your kids. Also, Klinkenborg shares lines from college students’ writing that seem just fine on the surface, but have underlying errors that confuse the reader. He explains what those errors are. Very instructive for anyone who instructs others on writing.)