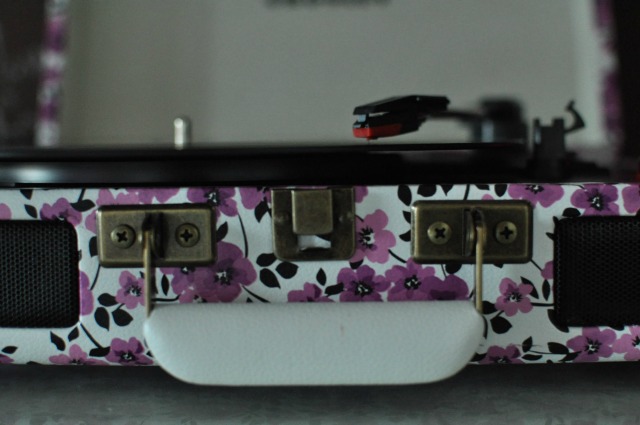 You know how when a new year rolls around, some people come up with a word for that year? Something that will guide them and give a mission to their year? My online friend Amy of mama scout selected story as her guiding word this year.

I’ve tried this in the past, but apparently it didn’t stick because I have utterly no recollection of the words I picked. They were lost to me by Valentine’s Day.

In late December, I saw friends on Twitter tweeting about words they were considering. I didn’t pay much attention, because guiding words had been about as useful to me as garlic presses. (I fail to see the point of garlic presses. Except for making play-doh hair.)

But then a word kept flitting through my brain. Record.

Not record as in the noun, the circle of vinyl that you spin on a player. Although that sort of record has gotten plenty of play here recently. Lulu got a girly record player for Christmas and has been spinning everything from Frank Sinatra to Childish Gambino. Then my brother got one for Christmas too–although his lacks pansies on the case–and he set it up at our parents’ house on Christmas Day. My parents and my uncle both offered up their old record collections, and we screamed and squealed over them. An original Star Wars soundtrack! (H snapped that one up.) The Carpenters! Urban Cowboy! Car Wash! (Car Wash? Really? My brother and I were a bit dumbfounded about why our uncle owned that one, but we bickered over who got to keep it. Fill up and you don’t have to pay…)

No, the record that flitted through my brain was the verb. Record as in to make note of.

Somehow, in the past couple of years, I have become very bad at recording.

I’ve slowed way down when it comes to taking photos, for one. A few years back, after getting a new camera, I tried to improve at photography by taking a photo a day. It makes me a little wistful to look back at those photos, to see what a detailed story of our lives they told, and to realize that I haven’t captured the past few years in the same way.

I’ve also stopped writing in my journals as much as I used to. I have one personal journal, one about the kids and a notebook for gathering bits for my writing. All have been written in just sporadically in the past two years or so.

I wonder about this. I think that maybe social media and blogging have eaten up time that I once used to reflect. And maybe it isn’t even just the time–it’s that my priorities have shifted. I’ve spent more and more of my life living online–writing and responding to blog posts, hanging out on Twitter, peeking in (begrudgingly) on Facebook. It’s almost as if the endless input of information, the constant conversation, have taken away some of my drive to sit with myself. Oh, I sit with myself, literally, alone, at my computer. But I think I spend less time pondering my life just for me, and not to share.

Maybe the word record bubbled up from my subconscious, warning me of what I’m missing. Can you relate to this at all?

I’m taking daily photos again. Not just photos of trips and birthdays but regular life. At least one per day. I’m not posting them all to Flickr this time around; I like to save Flickr for my favorite shots. (Although I am sorely tempted by this 365 project resurrected by old Flickr friends. I’ll start by being inspired there; maybe I’ll cave and join them.) I want to capture more of our lives; I want to become a better photographer. I want to record every gorgeous slant of light that glances on my days.

I’ve been dipping into Instagram more and more. Come find me there! I know, I know: I’m writing about how social media has impacted the way I reflect, but Instagram doesn’t feel so sapping, somehow. It isn’t a barrage of read this! think this! make this! buy this! wish you had this! I can simply scroll through the images, learning from the talented photographers, enjoying bits from the real lives of folks. I can dash in for a quick fix–feels like popping a piece of hard candy in my mouth. It’s there, it’s sweet, it’s gone. It gives me that hit of connection I crave without making my brain jittery.

At the same time, I’m spending less time on Twitter. Oh, I adore my Twitter: smart people, smart ideas, brief and pithy. But I found myself trying to keep up with Twitter–trying to read every tweet that came in over the course of a day, which is a ridiculous endeavor, more like licking at one of those huge jawbreakers you’d get as a kid, the giant white speckled ones that don’t fit in your mouth and so you lick them them until your tongue feels like sandpaper and you have a mouth full of canker sores. It got to the point that Twitter time was eating up chunks of my day. It also sends my brain pinging all over the place, like I’ve shot up black coffee. Which is good in small doses, but not as a constant drip. I still love it so: Twitter, I can’t quit you! But I’m just dipping in a couple of times a day. In the morning, after I’ve worked on my writing, and again sometime later in the day. Not trying to catch up on all I’ve missed; just enjoying what’s there right now. It’s enough.

I’m trying to write in my journals more. What kind of writer can I claim to be if I’m not reflecting away from an audience? Also, the more time I spend writing essays, (Yes! Fist pump! Fine words: the more time I spend writing essays!) the more I mourn the lack of recent entries in my mother’s journal. Why didn’t I get down the details of T turning twelve; that conversation with Lulu about why she’s grown out of dystopian fiction? I think I’ll remember it all, but when I go back to write it, I’ve forgotten.

About a week ago, I was standing in the kitchen when I heard a faint sound. At first I thought it was water dripping, but that wasn’t it. It was muted, almost imperceptible. Familiar. But where was it coming from? I turned my head up towards the speaker above the sink. Finally I recognized it, an old sound I once knew so well: a record that had come to its end, with the needle stuck in that limbo before the label: pop, hiss, pop, hiss, again and again and again. I ran towards my husband’s record player in the living room. He’d been playing the Jellyfish album I’d given him for Christmas the night before–twelve hours earlier. Rounding the corner to the player, I confirmed what I already knew. The record spun, arm at the label, as it had for the past twelve hours. I wondered if needle would be ruined, but mostly I was relieved that I hadn’t left the record going; I think Chris paid more for that needle alone than we’d paid for Lulu’s pansy-covered player. How easily we forget how to do something that was once second nature! How to turn off a record when we’ve become accustomed to digital music that simply stops. How to write in a journal. How to take photos of regular life.

I picked up the needle and placed it back at the record’s beginning. Everything sounded just fine.