i have a picture of you on my heart 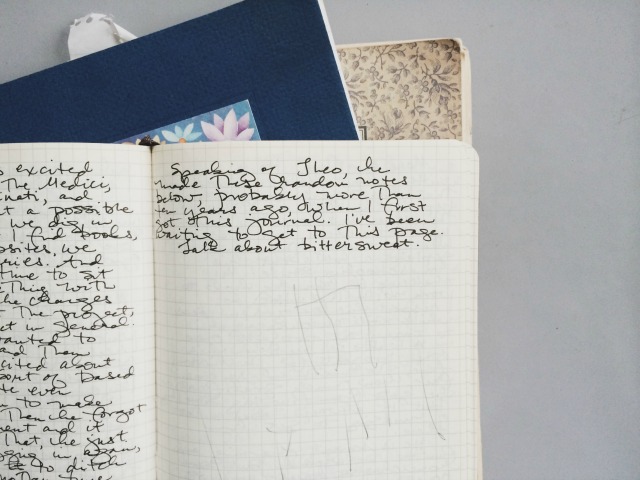 I’ve been rereading my mother’s journals for an essay that I’m working on, and rediscovering nuggets like these:

H at three, when I asked him to put away one set of toys before taking out another: “I’m not into that.”

Mr. T at six, questioning his sixteen-year-old brother: “Would you rather have a little brother, or a doughnut on a rainy day?”

Ha! Their words let me see how much each kid has always been who they are now. In flickers. H has been a no-nonsense, straight-shooter from the start. His sister has always been the sort of person who slings words for effect, and knows their social power. And Mr. T has always had a grand imagination, slightly offbeat.

I’ve kept personal journals from the time I was in college; I started keeping these separate ones about the kids just before Lulu was born. They’re a place for me to write down funny things the kids have said and done, and to reflect on them as they’ve grown up. I’ve written in them sporadically–sometimes every few weeks, sometimes every few months. I always wished I’d written more, but it’s surprising how much even occasional entries add up. My current mother’s journal is a Moleskine with grid pages–thin pages and small lines means you can cram a lot in. I started this one in 2003! My 10-year-old has turned into a 22-year-old in this journal! There is a page mid-way, with pencil scrawls from Mr. T that he must have done when he was two. I didn’t write my way to that page for another ten years; I finally got there this March. I wrote around his two-year-old scribblings about the twelve-year-old he’d become, with a his fascination with the Medici and the Illuminati, and his tendencies to be less of a maker and more of a talker.

Seeing all that on the same page makes a mother’s heart feel like it’s being stepped on. In a good way, I suppose. I’m being imprinted.

It makes me think of a night when T was six and he called to me in the hallway, after I kissed him goodnight, “Mama, I have a picture of you on my heart!” That’s just how he said it. I know–it’s in my journal.

My journals are full of pictures. Not actual photos or drawings, but snapshots of the kids at different ages. I start reading and suddenly there are different versions of the kids, right before me.

There is H at eight at the piano in the family room, wearing his A’s cap and playing “Hall of the Mountain King” as fast as he can crank it out. He looks at us, no smile because he’s concentrating, crosses his left hand over his right and keeps playing with opposite hands. He looks at us again, thinking how to up the ante, and sinks to his knees below the piano, his hands still above his head, crossed and playing.

There is Lulu in her bedroom with the lavender walls at three, negotiating something with her dad. She lets him talk for a bit, then puts one hand on her hip, raises the other one towards him and says, “I’ll tell you what.”

There is Mr. T at two, sitting in his high chair with his butter-colored hair, and a baby carrot in each chubby hand. He holds the carrots upright like rockets and says, “One, two, free, go!” and then guides them up, slow motion, making blasting noises—pf-f-f-f—and following their ascent with his head and his eyes.

Fourteen years ago I wrote in my mother’s journal, “I go back and reread what I’ve written here and am struck because I have forgotten it all.” How much more have I forgotten fourteen years later? Still, I pass the piano today and H is there, playing on his knees; I look through Lulu’s doorway and she’s still making deals, hand on hip; I dust the high chair I painted twenty-two years ago, now an artifact in our dining room, and there is Mr. T, blasting carrot rockets. Still. Because I wrote it down.

When I go out to write at a cafe, I shove my mother’s journals into my book bag beside my computer, so I can reference them as I work on my essay. The other day it hit me: what if I lost them? My computer is backed up; I could deal with losing it. If I lost one of my personal journals I’d be okay; it’s mostly the same rambling and whining as twenty years ago, with different details. But my mother’s journals! If I lost them I’d lose a part of my kids. I’d lose the part of my memory that I’ve already lost.

Maybe I could pay a certain kid to scan them (since he isn’t busy shooting carrot rockets these days.)

Honestly, this isn’t the best time to be working on an essay about my kids when they were younger, and to be rereading my old journals. Lulu leaves for college on the east coast in a few weeks. Talk about feeling like your heart is being trampled on! There’s no sense in soaking that heart in extra melancholy. I’ve been through this before; I know better. Yet there’s something comforting in rereading the journals now. They assure me that even when she’s gone, L will always be here, dancing through the kitchen, decorating her sentences with precocious words, making deals with her hand on her hip.