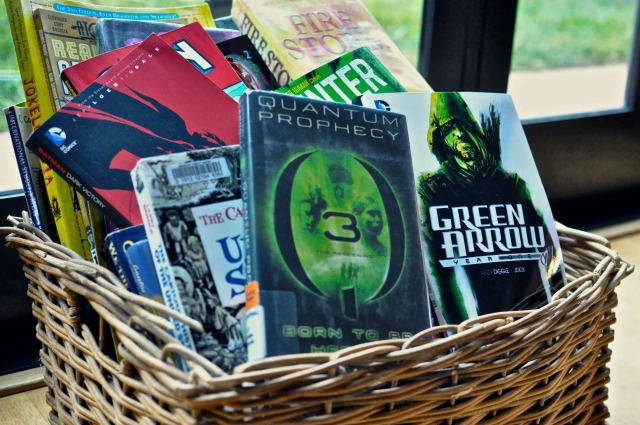 This is what I call out to Mr. T, who is in the backyard, walking circles around the trampoline, lost in thought. He gives me his usual just-a-minute and eventually comes in, pulls Hunter from the book basket and sprawls himself in every direction across the leather chair like an egg spreading in a skillet. He opens his book and begins to read. Across from him on the couch I smile, smug as can be, open mine and do the same.

I know, I know! I am a person who believes that the words required and reading should not be allowed in the same sentence. I have never been in a book club—much as I love talking about books—because I can’t stomach the notion of being forced to read what someone else tells me to. I grumble at summer library reading games that coerce kids into reading lists of books in exchange for mini pepperoni pizzas. I don’t even like books as gifts—unless the gift is a book I’ve asked for, or a cookbook. Gift books feel like reading obligations.

Reading should be—when you aren’t in school anyway, and I wish it were more so in schools—all about freedom. Reading freedom is a First Amendment basic here in the U.S. and it runs through my blood instead of Coca Cola. I believe in freedom to read what you want, and when you want to! While sprawled in your pose of choice, in the place of your choosing!

That philosophy has worked well in our homeschooling lives. My older two kids were always hungry readers. I rarely had to encourage them to read; more likely, I had to nag them to put a book down to empty the dishwasher already! They read pretty much whatever they wanted to, although I did occasionally nudge forward a few classics that I thought they’d enjoy.

T is different. It’s not that he doesn’t read; he’s just not as avid about it. Actually, that’s not true. He doesn’t read traditional fiction the way his siblings did. He learned to read by way of comics, and will still read any new comic that appears from library or bookstore, from cover to cover in a sitting. (And I’m talking about the sort of comic collections that go on for over a hundred pages.) He picks up the nonfiction books I check out if they captivate him—he’s a sucker for sundry information. He enjoys fiction read by me, and via audiobook. We almost always have both a read-aloud and an audiobook going.

He will also tell you that he reads constantly on the computer. Information about everything from secret societies to black holes to gaming news.

True. But it’s not the same, I tell him, as reading a well-written book. I know that there’s good writing here on the Internet (I hope you, dear reader, ahem, think so too) but I want him to read books as well, old-school thinker that I am. Long books. I want him to get lost in a novel, or a lengthy book of nonfiction once in a while.

I’d even made a point of ordering that book, Hunter, because it was the next volume in a series T had actually relished, yet he hadn’t been able to get into it. The book sat around for weeks–even when I left it prominently strewn on the kitchen table–closed tight.

I began to suspect that it wasn’t that T didn’t enjoy reading; he’d simply lost the habit of it.

You know how when you read a book every night as you’re falling asleep, and you never make it past a paragraph or two, and before long you come to the conclusion that the book is dull? But is the dull book putting you to sleep, or does the book merely seem dull because you are so tired at night that you never let the text’s momentum build? (The literary equivalent of the tree and its sound or lack thereof in the forest, depending on audience.) I think it’s the second case, more often than not. Why else do books seem so darned wonderful when you’re on vacation? Because you give them the chunks of time they’re due, and you let the story draw you in. You get over the hump of boredom and go skidding down the other side.

Considering this, I though back to when I was an elementary teacher, back in the olden days when there was a popular activity in classrooms called SSR. Sustained Silent Reading. Can you imagine a more awful name for something that a teacher is trying to promote as enjoyable? It sounds more like a communist party than a way of appreciating books. We just called it Silent Reading Time in my classroom, and it was actually a beloved part of the day for my students. They got to read whatever they wanted (and I worked at curating a tempting classroom library.) There was no expectation of subsequent work tied to that reading. It was reading for the simple pleasure of it.

Which is how I arrived at the notion of Reading Time for T and me.

I was nervous the first time we tried it. The last thing I wanted to do was taint reading with the stink of requiredness. So I just said Hey, you haven’t been reading much lately, so let’s have some quiet reading time. I’ll read too. And he went with it. He sprawled himself on that leather chair. It was better than being told that he had to clean his bathroom, after all. Or work on ratios and percentages.

So we sat in our family room, the afternoon sun doing the good work of slanting in and elevating the endeavor. I curled my legs on the couch, opened my book and felt like I was on vacation. And when I got up twenty minutes later to go to the store for dinner fixings, T kept reading.

When we did it again a few nights later, he kept reading until it got late.

“But I’m at the epilogue!” he said, still on that leather chair.

Like any wise mother, I know that an epilogue should not be interrupted. He slept late the next morning.

I’ve now loaded up the book basket with Hunter’s prequels, and other tempting books about futuristic worlds and epic adventures. Writing this though, I realize that I haven’t made a call for Reading Time this week.

I remind myself: If I want my kid to make reading a priority, I need to make it one too.