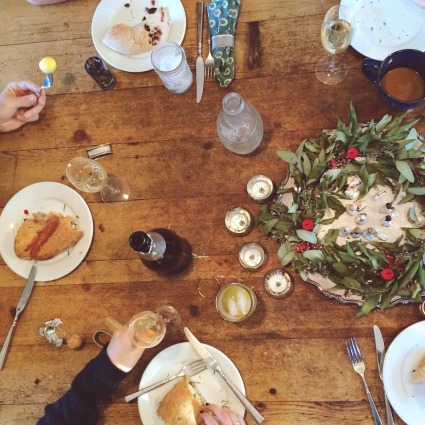 Our two New York kids were home for Christmas. H went back a few weeks ago; Lulu is here for a few more days. It was pretty much the best thing ever, having all three kids home at once.

It was also loud. My family is loud.

Some of the family noise is good, don’t get me wrong: the three of them talking at once, eagerly, around the dinner table about superhero movies or the origins of hip hop or the behavioral psychology of cats. Or shouting out answers when we play Anomia. Or joining in to sing Too Many Cooks.

Or responding as they did the morning I asked how they’d feel if I wrote a memoir of our homeschooling lives. This was serious stuff; I don’t want to take on such a big project only to have them tell me two years in that they’re uncomfortable. I can change your names I told them and It’s usually me who comes off the worst in my writing. Heads bobbed slightly in consideration; there seemed to be no objection.

Okay, H said. But only if you give it the title from the book in The Royal Tenenbaums. 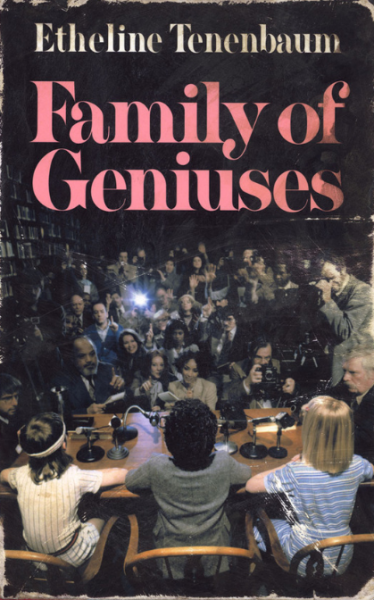 Soon all three kids were shouting Yes, yes, yes! I was instantly transported back to the day they tried to convince me to name this blog Genius Farm.

Both times, it got loud.

(A small part of me wonders if I can get away with titling a memoir Family of Geniuses if I come up with the right subtitle.)

Yet there is plenty of not-so-good loud when the three kids are together. One kid loudly falling apart because it took too long to choose a restaurant one night in Lake Tahoe. (This anonymous kid’s tendency to lose it when hungry long ago earned him or her the title Melty the Meltdown Clown.) One kid storming in from the backyard shouting that another is too rough on the trampoline, even though the shouter was the one who brought out the boxing gloves. (Yes, literal boxing gloves.) A quarrel in a restaurant (before the food came! Melty was already disintegrating!) about why Seinfeld is superior to 30 Rock, which devolved into a younger sibling arguing that an older sibling didn’t respect his or her opinions, and the older sibling chastising the younger for always making arguments emotional. This interchange got so loud that a certain father got up and took a walk around the bar. He doesn’t like conflict, particularly in public.

Life is rarely quiet when all three kids are together. It’s always been this way. With these three it’s either contention or utter glee.

What’s wrong with this family? Mr. T shouted this during some dinner flare-up when he was five. I believe he may have been standing on his chair at the time. He often stood on his chair and shouted when his older siblings left no space for him in the dinner conversation. I should point out that our kitchen chairs are actually tall barstools. A small boy standing on a barstool and shouting tends to get your attention.

What’s wrong with this family? Why is everyone always fighting?

When my family is in the midst of a bickerfest, I think of other families. Families that I know in person or from Waldorfy blogs, in which everyone is sweet and gentle and kind with one another. With siblings who wrap their arms around other siblings when they’re down. (Actually, that happens here. Sometimes.) With kids who help out without being asked. (That happens here too. Sometimes.) With everyone around the dinner table, calmly eating and chatting and passing the Parmesan. (That happens around here pretty much never.)

It’s not that my family isn’t kind and sweet, I realize; it’s just that everyone is so damn opinionated. How did all three kids turn out this way? This is where I step out from behind the curtain and wave sheepishly. Oh, hi, here I am, Very Opionated Person. But I don’t think I’m generally loud and spouting with my opinions. Then there’s my husband, who isn’t loud and spouting either—but he does have tendencies towards, ahem, impatience. Put those two qualities together, and perhaps the kids were doomed. I have something to say! And I must say it now!

I suppose I always wanted kids who knew themselves and could speak their minds. I suppose we encouraged that. Watch what you wish for.

On New Year’s Day, a few days after my kids’ noisy lobbying for Family of Geniuses, we watched The Royal Tenenbaums together. The two older kids and their dad and I have seen the film countless times, but it was Mr. T’s first viewing. I’m sorry to report that he fell asleep. Still, one night at dinner in Tahoe, the conversation turned to which of us was most like each Tenenbaum character. I get to be Etheline, of course, shepherding my geniuses through their childhoods. Lulu gets to be Margot, with her secrets and black eyeliner. T is Chas, with his entrepreneurial ideas and affinity for sweatpants. We were thinking about how H is like Richie, but H isn’t like Richie, so the conversation fell apart and we got back to the potato skins that one third of the kids wanted to order, and another third didn’t, which had caused a minor (loud) flare-up fifteen minutes earlier.

Later, after we’d all eaten a bit and Melty mellowed out, Lulu called out He’s Royal! and made a case for why her older brother is not Richie, but the family patriarch, Royal Tenenbaum: He’s a bit of a jerk sometimes. But he means well. And he’s undeniably fun.

And he even has the same haircut! Lulu and I giggled. H hasn’t cut his hair in months; it sticks out beneath his A’s cap, grazing his shoulders. Royally.

We’re satisfied with how it all works out: Chris gets to be Richie, the sensitive one who plays tennis and doesn’t like conflict, stuck in a family of people with big opinions. Perfect.

I think about this. The Tenenbaums are one mess of a family, but you know that between the faked terminal illnesses and attempted suicides, they love each other. I suppose I’d rather be the Tenenbaums than some bland perfect family on a Christmas card. I need to remember that the next time all five of us are together and our dinner conversation explodes into an earsplitting debate over whether e-sports are actually sports, or whether it’s hardest to be the oldest/middle/youngest kid.

But for now, one kid is back in New York and the other is packing her bags. Things have quieted down. I have to say, I miss the noise.