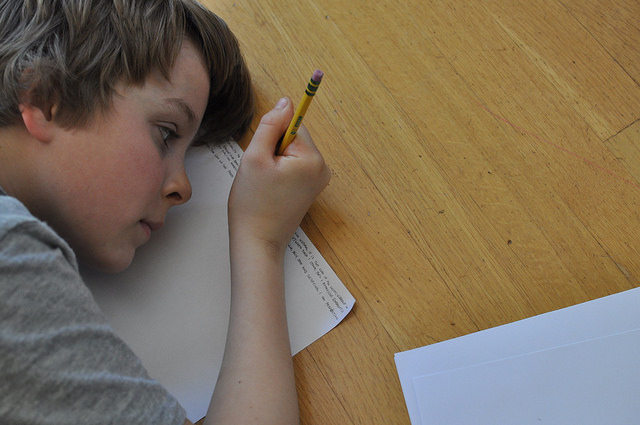 Desire is a powerful engine. As a homeschooling parent I harness it shamelessly. If my boy delighted in turning learning into games, I was game. Through T’s eyes, the Periodic Table was a glorious alternative Pokédex, each element a character with distinctive powers and potential to unleash chaos on other elements. Other areas of science, too, were grand battlefields of characters with varying strengths; he drew Pokémon-esque cards for the Solar System, for minerals, for spiders. He planned a videogame based on Norse myths—Don’t fall into Ginnungagap or you’ll die! —and character cards for his favorite Greek heroes: Ajax’s special power: Really Strong. Achilles’ special power: Invalnerable. (Just one letter off from invulnerable. Just one small spot on the heel.)

I didn’t think much about what these fascinations revealed about T’s underlying talents, or his future. He was seven, eight, nine. He liked Pokémon cards and videogames. He was no different from a million other boys.

Except he was different. He couldn’t kick a soccer ball in the backyard without making some new game of it. “Let’s say hands are allowed if the ball bounces. Let’s say that you can only touch the ball once before you kick it. Let’s say that if the ball hits the path three times, you have to start over.” To which his dad would say, exasperated, “Let’s just kick the darn soccer ball!”

This is an excerpt from my latest column for home/school/life, in the Winter 2015 edition. It’s an exploration of my youngest’s lifelong love of games, and how that love has played out in his homeschooling. I’ve always known that games have been an continued interest of T’s, but it wasn’t until I started writing this piece, and looking back through my homeschooling notes and T’s project files that I saw how far-reaching and enduring this passion has been. It sort of blew my mind, and I’ve been right beside him all along. The notion that my kid has shaped his education around games, and in large part videogames, is a knotty topic, and it’s what I explore in the piece.

Did you happen to read the column? If so, I’d love to hear your thoughts. One downside to magazine writing is that there’s not much immediate feedback–if there’s feedback at all. You’ve spoiled me so in this space: I hit publish here and you write back to me, and start up conversations! Come chat with me about this piece if you’ve read it, won’t you? Writing here alone at my desk, and then never talking about it is a lonely business.

(Here’s another piece of mine, for the bored without home/school/life subscriptions: a mini-essay from a couple of years back, on my oldest going back to college, posted on Medium. I love how the work looks so clean on Medium; I’m less sure about Medium as a forum for finding an audience. But I’m trying it out, and if you want to chat about the piece, or about Medium itself, or about what you’re cooking for dinner tonight, I am obviously sitting here at my computer, waiting for someone, anyone, to show up and pull out a chair.)