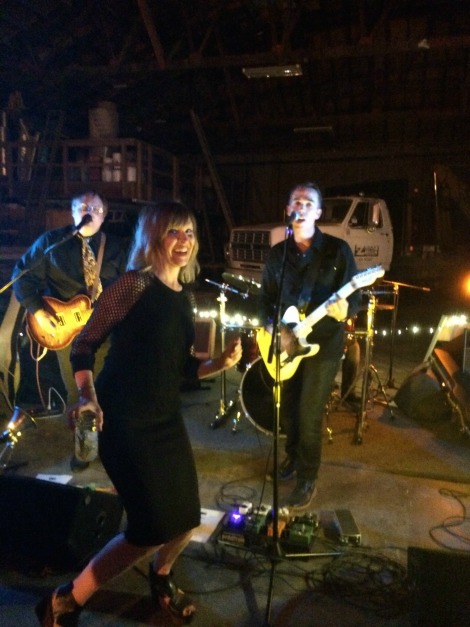 I turned fifty last week. An old high school acquaintance wrote on my Facebook wall, “It’s just a number.” To make me feel better, I guess.

But I don’t feel bad about turning fifty. I feel excited, to be honest. When you’re in your late forties (or thirties or twenties, for that matter), you’re creaking towards the end of something. Queue up the tired sound of a roller coaster slowing down and lurching you towards the end of the ride. Forty-eight, forty-nine, forty-nine-and-a-half. But guess what? The roller coaster isn’t stopping—it’s speeding back up! And it’s going down a whole new track!

Do I feel like waving my arms and screaming as I head to the first big drop? I do. You should have seen me in April, at the joint 50th birthday party that Chris and I threw for ourselves. It was a dance party in a warehouse because there is nothing to make you feel younger than throwing a dance party in a warehouse. Truth be told, there was a lot of work involved in turning a sawdusty, mud-caked, tractor-filled warehouse into a place where your friends can show up in silk blouses and heels. A few afternoons of scrubbing and mopping, and much moving to the side of heavy equipment. But it’s surprising what you can do with a few twinkle lights strung between sawhorses, rented barstools set around a bar made from scaffolding, and 100 candles in jars from Ikea.

I danced like crazy that night. I danced and danced and danced. First to the set that Chris’ band played, and then to a mostly 80s and 90s playlist that didn’t let up. By the time Hole’s “Violet” came on, I was a whirling, fist-pumping, Courtney Love-like lunatic. I’m sure it wasn’t pretty. I’m sure my friends assumed that I’d had a few too many Rhubarb Collinses. I hadn’t! I just love to dance, and I have a husband who loves to dance. We went to high school together (although we didn’t date until the end of college) so lots of high school friends were at the party, lots of fellow turning-50-year-olds. We women did our Molly Ringwald kick-flips; the guys did their hunched-over, bent-armed ska moves. We danced until my hair flattened and I was a sweaty mess for goodbye hugs and it was the best way I can imagine to usher in my fifties.

50 feels like a bigger transition than 30 or 40 did. My life didn’t change much with those birthdays. By my 30th birthday, I was pregnant with my second kid. I became the mother of a teenager the week I turned 40, which was a double whammy of feeling older. Still, for both of those birthdays I was already embedded in the life that would follow for the rest of the decade.

This time I’m on the precipice of something. We have one kid out of college, and one finished with her freshman year. (Though she’s home for the summer. Whoopee!) I’m heading into what looks like my last year of homeschooling Mr. T. That’s a major thing if you consider that I’ve been homeschooling kids for eighteen years. For twenty-three if you count from the time my oldest was born, which any homeschooler will tell you that you may as well do.

For twenty three years I’ve been filling my days with other people. Wonderful people—my favorite people in the world. I’ve been giving them what they need, from diaper changes, to rides to ballet, to help with their college applications, to the zillion and one other piddly and imperative things that mothers do, day after day after day.

Now here come my fifties, and guess who I’ll have more time for? (Me!) I’ll be able to write in the middle of the day, just when my writing mojo is always kicking in, when I usually have to walk away from my desk. I’ve dreamed of this for twenty-three years. No wonder I feel like dancing.

Have you read Sandra Tsing Loh’s essay on menopause, “The Bitch is Back”?  If you’re in your forties or fifties, I insist that you do. It’s hilarious and over the top and utterly spot on. Loh explores the fascinating idea (based on her reading of Christiane Northrup’s The Wisdom of Menopause) that it isn’t a huge hormonal “change” that signifies menopause. Instead, it’s the lifting of the atypical hormonal cloud of our fertile years—the cloud that makes us women so willing to nurture others for over three decades. And how menopause is really the return of our true, normal selves. (Remember the girl you were at eight? That self.) Wait until you get to the part in the essay where Aunt Carol flings the leg of lamb out the window. You will laugh out loud. You will totally get it.

“Fertility’s amped-up reproductive hormones helped Aunt Carol 30 years ago to begin her mysterious automatic weekly ritual of roasting lamb just so and laying out 12 settings of silverware with an OCD-like attention to detail while cheerfully washing and folding and ironing the family laundry. No normal person would do that—look at the rest of the family: they are reading the paper and lazing about like rational, sensible people. And now that Aunt Carol’s hormonal cloud is finally wearing off, it’s not a tragedy, or an abnormality, or her going crazy—it just means she can rejoin the rest of the human race: she can be the same selfish, non-nurturing, non-bonding type of person everyone else is. (And so what if get-well casseroles won’t get baked, PTAs will collapse, and in-laws will go for decades without being sent a single greeting card? Paging Aunt Carol! The old Aunt Carol!)”

Snort! I wish Aunt Carol could have been there with me at the party, rocking out to Hole. Not caring that she was a sweaty mess. Thrashing her arms with me when Courtney screamed You should learn HOW TO SAY NO! She would have loved it.

Tonight I’m taking off on a redeye to Cleveland. I’m headed to the River Teeth Nonfiction Conference in Ashland, Ohio. I’m a tiny bit terrified because I won’t know a soul, and I’m staying in a dorm with strangers. But Cheryl Strayed will be speaking! And my online friend Kate Hopper too! And people will be geeking out on creative nonfiction all weekend! Happy 50th to me.

Fifty is not just a number. It’s a dance party. Crank that song up, baby! Let’s dance.

P.S. Paging Sally O’Malley to the dance floor. Aunt Carol and I want to join you in some kicks.