where the sparks fly 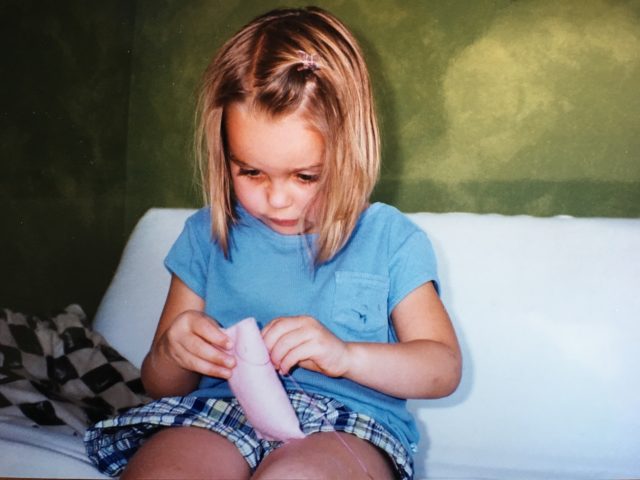 She’s four. Sewing for the first time. It’s August 19, 1999, which I know because I happened to write about this day in my Mother’s Journal. She has insisted on sewing “with a real needle.” Together we decide on a felt pillow for her baby doll, Cookie. She chooses purple cloth, purple thread, her favorite. That night I write in my journal, I wasn’t sure about it because she doesn’t even lace up those lacing cards in any consistent pattern. But she was adamant!

She was adamant. She is twenty-two now. She is still adamant.

Lately I’ve been feeling bad that I no longer post much here about homeschooling. And though I’m not homeschooling, I’m writing a memoir of homeschooling, so I’m thinking about our homeschool life every day. I want to stay connected to that world.

On Instagram I see young homeschooling families sharing photos of their lives. Many have followings in the thousands–these women are connected! I’m envious; I would have eaten up that kind of connection back in the day. But here I am in this quiet house, two kids off living their lives in New York City, a busy sixteen-year-old doing his own thing. So I post Instagram photos of books and flowers.

I remember all the making and playing and talking the kids did when they were younger. Building ships from couch cushions, silk scarves and the kitchen broom. Playing restaurant with a menu they’d designed on the computer. (Asparagus suflay, anyone?) Talking about The Great Brain in the garage because we’d listened to the audiobook (then known as a story tape) on the way home from the grocery store and didn’t want to stop the conversation. Often I worried that we weren’t getting enough done in our homeschooling days. That we weren’t covering enough. The making and the playing and the talking took time. We went deep instead of wide. I could see how much that mattered, but sometimes I still worried.

I would try to make guesses about where it all would lead, where the kids’ lives would take them. But of course I didn’t know.

Now they’re 25, 22 and 16. And you know what’s really fun? Looking backwards, because now I can see the connections, the arcs of light. I can see how their little kid selves predicted who they are today.

It occurred to me that newer homeschoolers might appreciate such rearview mirror insights. I thought about Instagram. What if I shared photos of the kids when they were younger, with a few flash-forward thoughts about where those early interests took them? It might help newer homeschoolers have a little more faith in their own family’s path–in the making, the playing, the talking and all the glorious not-doing. The not-covering.

Here’s what I think newer homeschoolers need: A little more faith in themselves. A little less advice.

The photo slays me. Her focus. Her small, busy hands. The butterfly clip in her hair. How she has pen marks on her pocket from the making she did earlier, before she insisted on sewing with a real needle.

I wrote in my journal: I was amazed at how well she did! She was very careful. She didn’t poke herself at all. When she was finished she said, “I can sew anywhere!”

At twenty-two she does not have those sweet dimpled fingers or a butterfly clip in her hair. But that focus? Has not changed. The insistence on doing what she wants to do, when she wants to do it? Yep. She chose a college program that allowed her to design her own major. That offered interdisciplinary courses she could choose based on her interests. That allowed her to revolve her studies around the arts. She’s still making. Still insisting on doing things her own way.

She’s graduating in May, which also slays me.

I’m calling my new Instagram project Where the Sparks Fly. I’ve always thought of those moments when the kids eyes lit up as the sparks I needed to pay attention to. The ones that would lead to where they wanted to go. I’m hoping to post an old photo and a few rearview mirror thoughts every Thursday. (#tbt = throwback Thursday, for the hashtag-befuddled.) Expect many photos shot on real film with terrible lighting! And equally terrible 90s fashions and haircuts!

If you’re on Instagram, I hope you’ll come follow the posts. #wherethesparksfly And if you aren’t, you can always catch my feed here, in the center of my footer. Click on a photo and you can view it on Instagram.

If you know any homeschooling families who could use a little less advice, and a little more faith in themselves, maybe tag them on IG, or send them here. Sometimes it’s easier to go down that less-travelled path when others have gone before you, who can look in the rearview mirror and assure that you’re getting somewhere.