when we were young 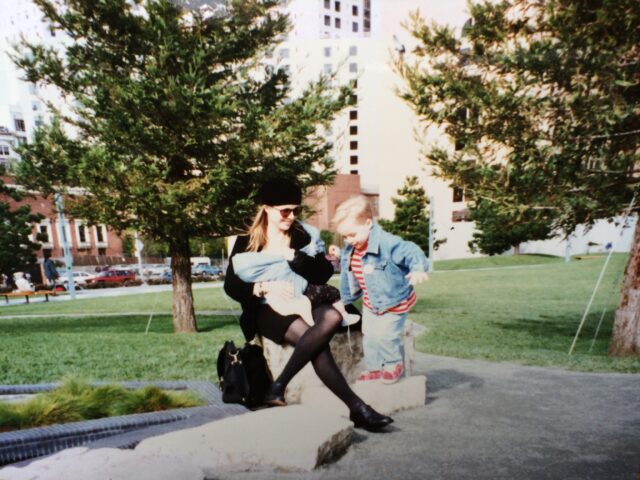 I’ve been taking lots of calls and emails from families considering pulling their kids out of school to homeschool this fall. Not “homeschool” as in doing online classwork, but taking the leap, separating from schools altogether, and doing things their own way. A silver lining to this devastating pandemic: homeschooling is expanding at unprecedented rates.

Talking to these families as they make this big decision, I’m brought back to my own family’s homeschooling beginnings, to the fall we decided to do it. I thought it might be fun to share that story here, a version that originally appeared in the Winter 2016 edition of home/school/life magazine, where I was a columnist for a few years. (If you’re homeschooling yourself and don’t know this magazine, check it out! It’s excellent. Many thanks to editor Amy for allowing me to share this essay.)

When We Were Young

Let me take you back, way back, to the fall of 1996. Maybe you were in college or high school, listening to Alanis Morissette and getting riled up, or maybe you were younger, watching Boy Meets World on Friday nights. Because I am probably older than you, I was a young mother of a four-year-old boy and a baby girl. The four-year old wore overalls with a deep side part in his hair and looked a lot like Dennis the Menace. His sister had such big eyes that she kind of looked like Yoda, and some of the fattest legs you’ve ever seen on a baby. And I was their mother, still wearing little black skirts that hit mid-thigh, with tights and oxford shoes, smitten with the notion of homeschooling.

Homeschooling. I’d thought about it when H. was two, and I met the first homeschoolers I’d ever come across, a family with five kids. The kids didn’t go to school—none of them. They didn’t go to school! I was a former elementary teacher and the whole notion seemed as unfathomable to me as the concept of email in those days. Still, I was intrigued enough to find a book about homeschooling at the library, and played with the idea for a few weeks that fall. But ultimately I lay in bed thinking about lunch boxes, and school Halloween parades, and tether balls soaring over blacktops at recess. I thought about Septembers and the new shoes that came with them. My heart jittered as I flipped through the losses. Homeschooling meant walking away from the American childhood experience, and I couldn’t do that to H.

When I picked up that brochure two years later, something had changed. Maybe it was that I knew H. better now, or maybe it was how kindergarten lurked in my peripheral vision. Or maybe it was something inexplicable, like the way the boy who grew up down the street had a different gleam about him one day in pre-algebra class, and suddenly you couldn’t stop writing his name on the inside flap of your Pee-Chee folder.

It did feel a little like puppy love. I picked up that brochure and, like that, the idea of homeschooling wrote itself into every margin of my mind. I researched it at home, dialing up AOL on our computer—dial-tone, beeps, static, that unforgettable spring-sproing, rocket launch fuzz—and after two or three attempts got connected.  Do you remember the Internet in 1996? How you spent more time looking at that little hourglass icon than you did actual content? How the images revealed themselves slowly, top to bottom, like a theater curtain in reverse? None of this seemed unreasonable to me back then; it was just what it took to get to the homeschooling message boards I found and lingered on that fall. People—mostly mothers—posted questions or shared their homeschooling experiences, and others responded. I scrolled and scrolled, searching for posts that might answer my concerns.  How do you meet homeschooling friends? What do kids miss out on when they don’t go to school? How do you tell your in-laws? I clicked and hoped, clicked and hoped. Sometimes it took a full minute for a new page to load. There was a lot of bickering about what did and didn’t constitute unschooling, but what struck me most was the community on those boards. Homeschoolers were real, connecting with one another! What started as a wisp of a notion gathered the weight of possibility.

What if? What if H. didn’t go to school the next fall? What if we found a local community of homeschoolers? What if I didn’t have to send my kids off to some other teacher’s classroom, while I got a job teaching other people’s kids? The possibilities shone brighter than a new lunch box.

I read every homeschooling book I could get my hands on that fall, which wasn’t hard—the stack was fairly short in 1996. I read the Johns, of course: John Taylor Gatto got me worked up about what happened in classrooms; John Holt helped me see how kids might learn outside of them.

Smaller, quieter books by homeschooling mothers moved me even more. There was Susan Richman in The Three R’s At Home, a book I lucked upon in the library and checked out so many times that to this day I picture it in its clear plastic library cover, instead of the jacket-free version I bought later and still own. Richman was a former teacher too, and downright gleeful in laying open her days with her kids, writing about how different learning looked outside a classroom, with one’s own children. She wrote lines like, “He makes mistakes, he misreads, AND HE CORRECTS HIMSELF.” I adored her quirky, all-caps enthusiasm. There was Nancy Wallace’s Child’s Work, a book with a subtitle that explained everything I loved about it: Taking children’s choices seriously. Wallace shared Richman’s fascination with her own children, but her approach was different. Where Richman was animated, Wallace was contemplative. She studied her children and their pursuits like a scientist. These women showed me what a homeschooling life might look like, and I wanted it. As much for myself as for my kids.

So this is how I learned about homeschooling that fall: from the Internet and books. It seems wild to me now. I didn’t know any homeschoolers. I went to a homeschooling information event in Berkeley one night, and saw real flesh-and-blood homeschoolers breastfeeding their children and answering questions, but it would be another six months before I’d get my kids to a park day and talk about homeschooling with an actual person.

Instead, I had an ongoing dialogue with myself in my journal. H. was going to preschool three mornings a week that fall, and I found myself comparing what I saw him do at preschool—it was a co-op—with my new notions about homeschooling and learning.

One set of pages starts:  I suppose the wide choices at preschool don’t necessarily encourage focus. H. worked for days on that castle drawing in his bedroom, and I’ve never seen him as excited about anything at preschool.

Another ramble begins: At preschool he plays with other children—very important. But does he really need that five or even three days a week? And couldn’t he get that from a homeschooling community?

If I didn’t have my journals, I’d remember that fall as a time of waffling, of back and forth worries about whether we should or shouldn’t homeschool. But page after page, line after loopy line tell a different story. My mind was made up almost instantly. One morning I picked up that brochure; days later I was resolute in my conviction to do it. It just fits the life I envision for us, I wrote. The harder part was declaring our choice—pulling H. from the preschool and announcing to our families, to the world, that we were homeschoolers.

I marvel at that young mother in her little black skirt: how was she so sure of herself? Keeping her kid out of kindergarten, playing hooky with society’s definition of childhood. Yet there I was, committing to a life choice that would carry on for the next twenty years, based on little more than a few books, some janky Internet message boards and a lovesick twittering in my gut. I opened that brochure, one flap, two, and we were off. Like that.

Fine advice for any homeschooling parent is to focus on what your child knows, rather than what she doesn’t know. The 1996 me didn’t know she would still be homeschooling nineteen years later; she didn’t know there would heartache over finding community, slammed doors over long division, and teenage days of longing for something else. But I knew we’d be happy if we quit the commute to preschool, if I settled on the couch in the morning when the sun was easy, reading Winnie-the-Pooh aloud with voices for all the characters, even Eeyore’s sorry drawl, the baby at the breast and the boy listening at my feet with blocks, building.

“Read more, Mama,” he said, in that crunchy-sugar four-year-old rasp, at the end of a chapter.

And so I kept going.