Before reading, you must check out the disclaimer. And promise no pouncing or guilt. 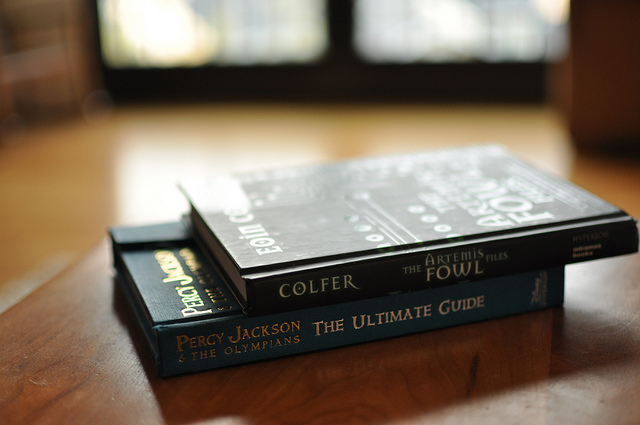 Ultimate guides are well-loved around here. Currently Percy Jackson and the Olympians: The Ultimate Guide has been found sprawled in various settings around the house, attesting to its popularity–with T, anyway. An ultimate guide is simply a rather cockily titled information guide. (Sometimes they’re called, more humbly, insider’s guides.) There are ultimate guides to soccer and baseball, to Indiana Jones, Wonder Woman and Sponge Bob, to scootering and movie-making and thumb wars. And let’s not forget Hauntings and Horrors: The Ultimate Guide to Spooky America. (Okay, I’ve never seen that one. I just appreciate the fact that there seems to be an ultimate guide to about everything.)

Something about the ultimate guide format seems to have appeal particularly–though not exclusively–for boys. My two boys have always found them irresistible. Just the other day, one of Lulu’s teenage buddies was over, and saw that Percy Jackson guide lying on the counter. “Ooh, I love ultimate guides,” he said, and squirreled it away into our office.

There’s no fixed format to an ultimate guide; they’re really just a mish-mash of interesting information.

The Percy Jackson guide, for example, has lists of characters, maps, an activity schedule for Percy, a list of Artifacts and Curiosities from the books, quizzes, a bestiary, a section called Ten Signs that You May be a Half-Blood. Oh, and removable character cards, like Pokemon cards, which, of course, are a fave with Mr. T.  Another well-loved guide around here is The Artemis Fowl Files, subtitled, predictably, The Ultimate Guide to the New York Times Best-selling Series. This one includes a translation of fairy code, A Spotter’s Guide to Fairies, diagrams of fairy helmets and pods, quizzes, “interviews” with the characters and more.

It’s precisely this mash-up quality that makes ultimate guides so promising as a writing format. Kids can choose any area of interest and write a guide for it. When it comes to content: anything goes. Maps, diagrams, jokes, glossaries, interviews, illustrations, recipes, quizzes, whatever sounds fun.

As I’ve mentioned here, Mr. T has been learning about the Ancient Greeks. He was trying to come up with a project, and I suggested an ultimate guide. T is a master at coming up with new ideas, but he doesn’t always have–how shall I say it?–follow-through. He likes an idea when it’s new and exciting, but then quickly becomes bored. A guide is a great option for a kid like him, because it’s a compilation of many small parts. There’s always a new way to explore his topic.

He decided to write The Ultimate Guide to the Trojan War. We flipped through the Percy Jackson and Artemis Fowl guides for inspiration, and then brainstormed a list of possible topics together. Here are some of the ideas we’ve come up with so far:

He’s starting to make pages on different types of soldiers. 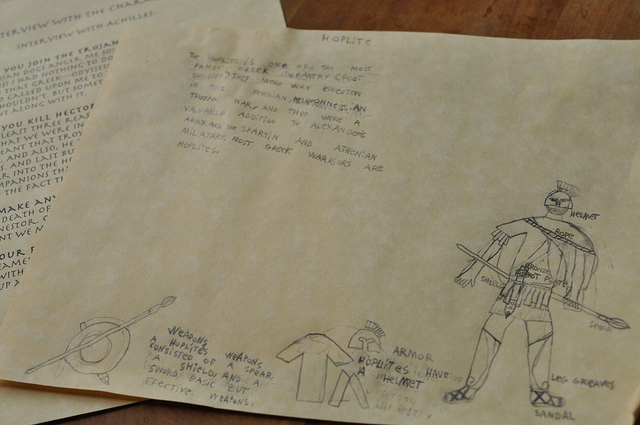 And here’s his interview with Achilles, dictated to me.

Why did you join the Trojan war?

Those Trojan dogs anger me so! Taking other’s possessions! I had nothing to do with Helen of Troy! But when that Greek—Odysseus was his name—came and called upon me to join the war of Troy, I knew I shouldn’t. But something urged inside me and I went along with it.

Why did you kill Hector of Troy?

I have at least three reasons. Obviously, the first one was that we were in a war, and killing Hector meant that Troy would lose its greatest warrior. And also, he killed my great friend, Patroclus. And last but not least, I wanted to strike fear into the heart of Troy, to show my Greek companions that I was not worthless. Oh yeah, and the fact that I wanted his stuff.

By far, steamed shrimp mixed with garlic and spinach.  With a slice of bread on the side. Buttered up and ready to go!

I’m not quite sure where the food insight came from. I mentioned that the Greeks might have preferred olive oil with their bread, but T was pretty keen on his Buttered up and ready to go! line. Whatever tickles him. Ultimately, it’s his ultimate guide.

I suppose what I like most about this type of writing is that it’s fun. Much more fun to write than a book report, or a straightforward science or history report. Yet it requires kids to delve deeply into their source material. They have to know their content just as well as they would for a typical report; maybe even more so. But the writing itself is much more creative and exciting to read. The form allows kids to explore different genres of writing in short bursts. Kids who like humor can play with it; kids who like statistics and facts can have fun with those too. And as they write, they’re experimenting with tone, style and genre. So much more sophisticated than traditional report writing.

Of course, the sheer ultimate-ness of an ultimate guide implies an encyclopedic completeness. Kids should know that they don’t need to write a complete ultimate guide. One or two entries may be enough for them.

What might your kids like to write guides for? Legos? The Wee Free Men? Emperor penguins? All-of-a-Kind Family? Valentine’s Day?  I’d love to hear some of your ideas in the comments. (Not that our kids’ ideas always match our ideas…)

If this is the sort of writing your child might enjoy, try flipping through some ultimate guides at your library. (Search the catalogue for “ultimate guide”–in quotes–or just “guide”, and limit the search to the children’s section.) Kids will probably be more inspired to write their own guides if they’ve browsed some published ones. If your kid gets excited about the format, throw out the idea of writing one. Help your child brainstorm possibilities for content, and see what happens. And for kids who enjoy design and making things, there’s lots of potential for turning their pages into handmade books. Check out Bookmaking with Kids for inspiration. (Browse the book structures category.)