if hephaestus had duct tape… 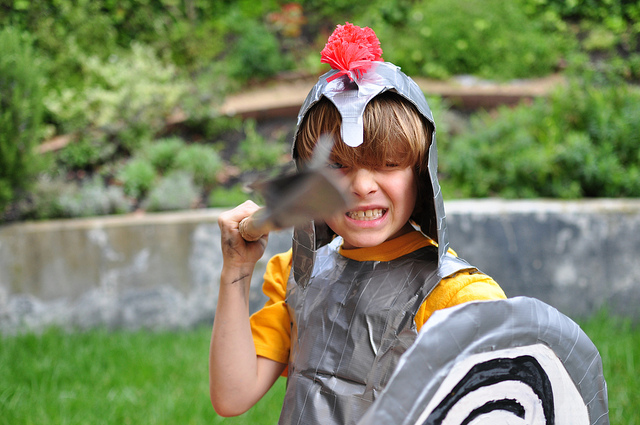 This is Mr. T’s costume for our homeschool history fair. (More on the fair coming soon.)  Like any good fan of The Iliad, T wanted his own hoplite armor. Like any good bricoleurs, we figured we could make it.

We started talking duct tape, and suddenly I remembered some instructions in Custom Knits for making a personal mannequin from duct tape and an old T-shirt.  And no, this knitting book has nothing to do with armor-making, but I thought a similar technique might work for T’s project.

T put on an old T-shirt–with nothing underneath–and I began to wrap duct tape around him. Lots of duct tape. After I’d wrapped the shirt in two or three layers of tape, I loosed T from the contraption by cutting straight up the back, through both the shirt and the tape. I cut off the sleeves and shaped the neck, armholes and bottom a bit with scissors, and then added a smooth layer of duct tape around the edges. Here’s what it looks like from the inside: 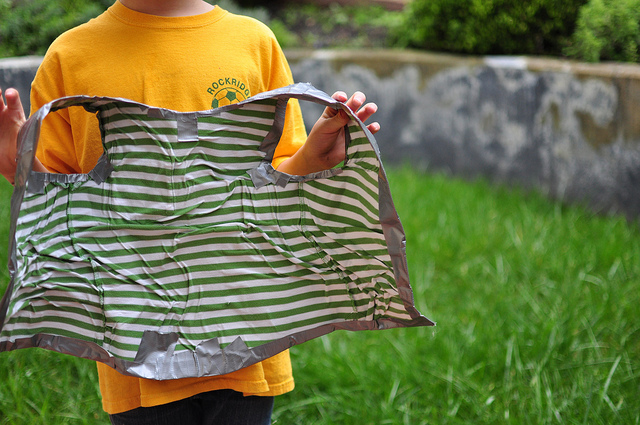 It worked! It’s fairly lightweight, it has a soft T-shirt lining, and it forms to T’s shape perfectly, just as hoplite body armor would do. 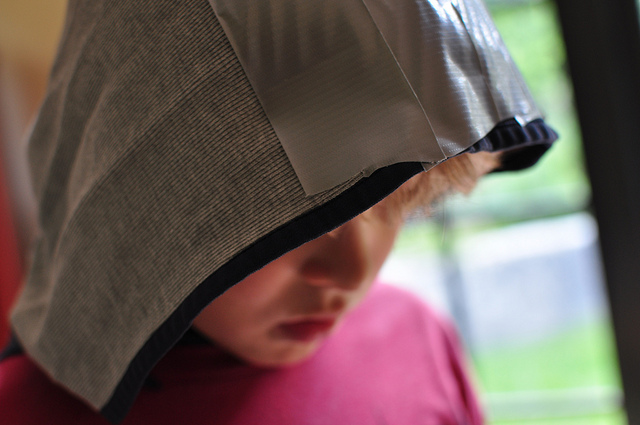 We decided to try the same technique for the helmet. This time we used the hood from an old hoodie. Again, T wore the hood while I taped around his head. Once I’d built up a few layers, I added a duct tape nosepiece and cheek guards, and shaped the helmet around the eyes with scissors. 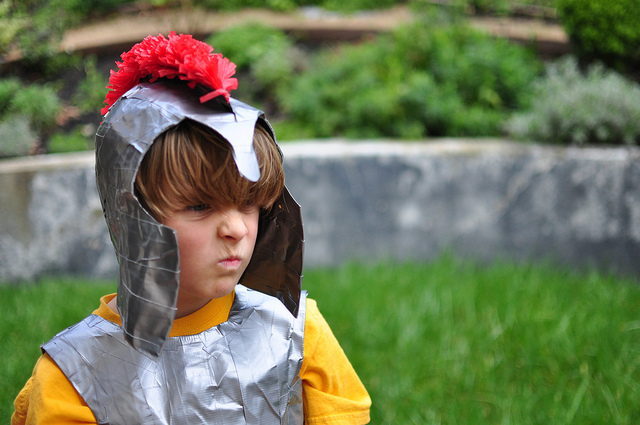 T wanted a “horsehair” crest, but our hardware store quest for attachable, flexible broom bristles was fruitless. Eventually crepe paper came to mind, and a Google search for “crepe paper fringe” pulled up some easy instructions for stitching together layers of crepe paper with a sewing machine. Perfect! I suppose I could have tried gluing the layers together but the sewing machine trick turned out to be incredibly simple and durable—and look at the cutesy-pie things you can make with crepe paper and a sewing machine!

For each bunch I stitched together six strips of cheap-o crepe paper streamers. I made six bunches, then glue-gunned them together into a single thick bunch, and attached them to the helmet with yet more duct tape. 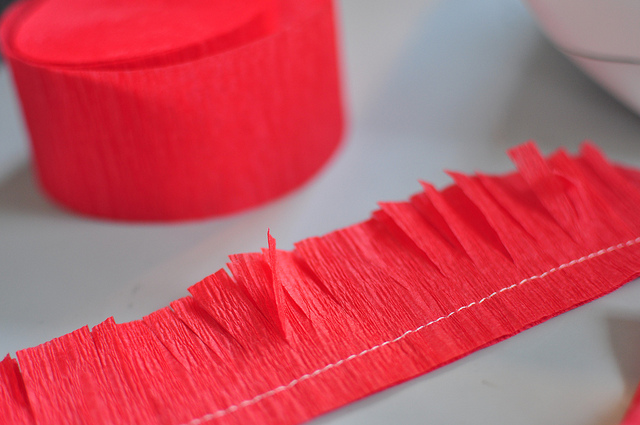 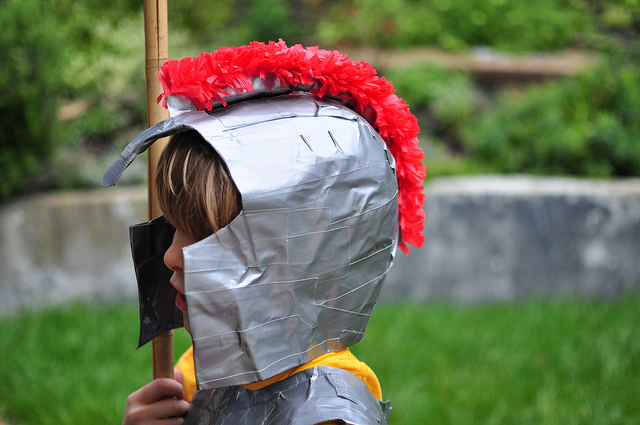 Mr. T and I envisioned making a shield or hoplon from something like a garbage can lid, plus foam and duct tape, but alas, no surplus lids could be found. We decided instead to start with a small round of cardboard because we had it—and because the painted Cyclops was the part of the shield that mattered most to T anyway. Then we maximized it by adding—yup—more duct tape to the edges. 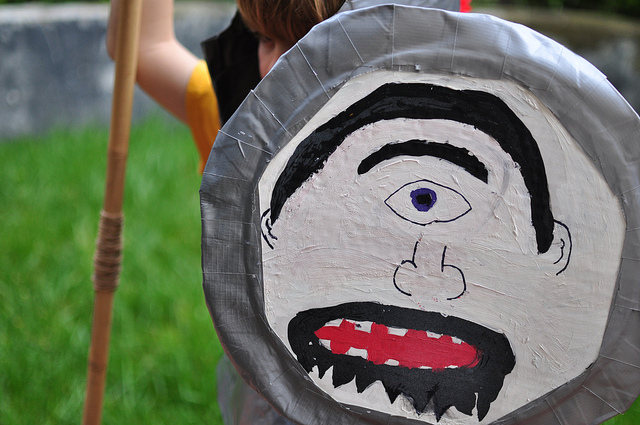 Of course the hoplite needed a spear. And yes, you can make a spearhead with duct tape. You just can’t kill a boar with it. 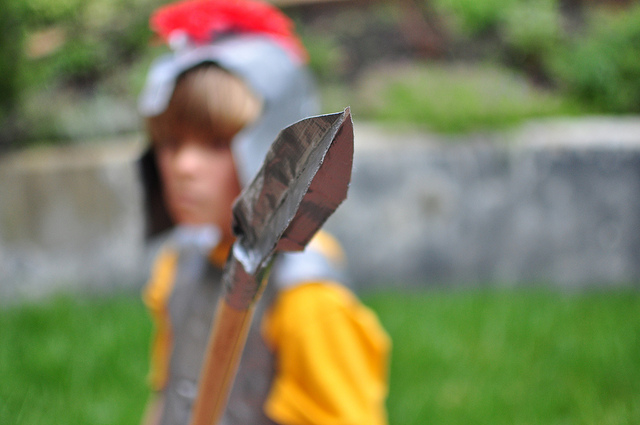 T is quite aware of the fact that hoplite armor would have likely been made from bronze, but our hardware store lacked bronze-colored duct tape. (No bronze duct tape, no flexible broom heads, no spare garbage can lids–and they call themselves a hardware store!) I Googled around for a type of spray paint that would stick to duct tape, but decided that any product with such an ability would probably not be a good thing to breathe. And anyway, when your helmet has a horsehair crest crafted from crepe paper, you aren’t really going for authentic. 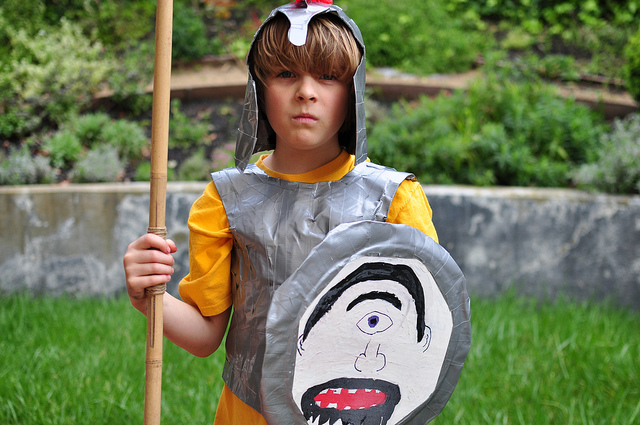 This was definitely a shared project. I would have liked it better if the design and the carrying-out belonged more to T. But building armor from stuff you find lying around the house is no simple task. Nor is cutting through multiple layers of duct tape. Plus, much of the costume required T to stand unmoving and play mannequin. Still, it was T’s vision: he did the research on what the armor should look like, he sketched and painted that fearsome Cyclops, he made lots of the little decisions. And he is very pleased with his new Greek gear.

Achilles, there’s a new hero after your heel, and his name is Mr. T. 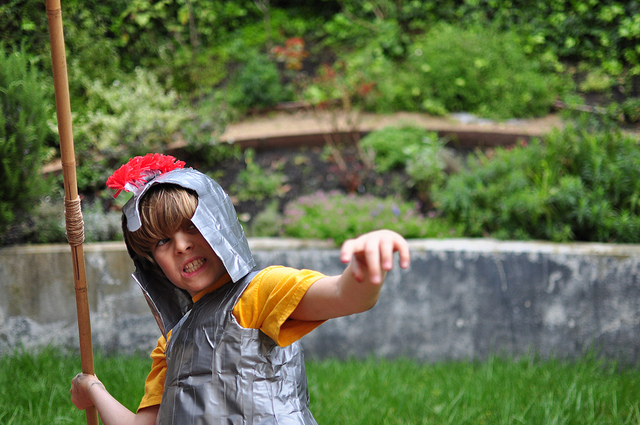