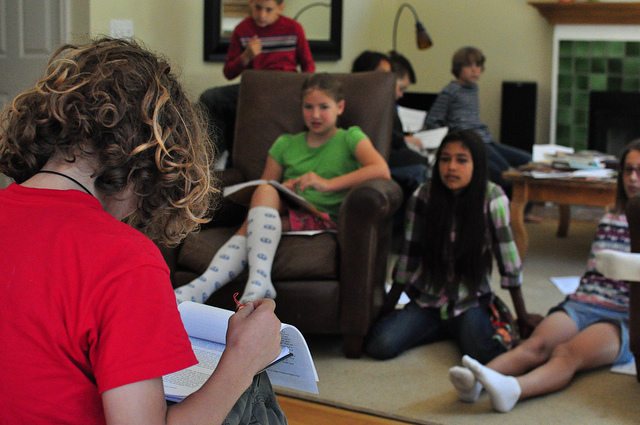 I loved reading your comments after my last post. So many great book-fueled conversations you’re having with your kids! I wanted to share another conversation with you, this time one from a recent writer’s workshop. (I’m paraphrasing this to the best of my recall. Wish I’d taken notes!)

That morning, one boy read his story about a baseball game. He’d written the piece in present tense: I throw the ball to second base. Matt catches the ball and the runner’s out.

It was an interesting way to approach the story, and I pointed it out to the kids. I reminded them what “present tense” means, and I asked what effect that tense has on the piece.

“It makes it more exciting,” one girl offered.

“Let’s compare what the piece would sound like in past tense,” I said, and I read a paragraph from the boy’s story, changing the tense as I went.

Now the kids could hear the difference. And many of them had comments.

“You don’t stop to think. The story goes faster.”

“It makes it more like a real baseball game.”

Yet, I said to the kids, most books you read are written in past tense. Why do you think that is?

This is where the conversation got deep. Let me point out that this is a group of ten eight to twelve-year-olds. Many are beginning writers themselves; several still dictate their work to parents. But they had plenty of opinions on the matter.

“In past tense the story goes slower.”

“In past tense you can stop the story and get inside the character’s head. You can’t do that in present tense ’cause the story keeps going.”

“If a whole book was in present tense, you’d never know what that the character was thinking. You couldn’t stop for very long.”

“If you didn’t know what a character was thinking, the book would be more like a movie. It would just tell what was happening all the time.”

And so the conversation went, for several minutes.

“Can you think of any longer books written in present tense?” I wondered.

One girl mentioned a book she’d read, Shiver, which she thought was in present tense. (I checked, and it seems to be written in past tense. But it would be interesting to explore why the book left her with that impression.)

At some point here, I’m not sure where, the conversation turned. This is one of the beauties of talking books: you never know where your conversation will spin and shoot off. You just don’t get that gorgeous tapestry of threads when your literature studies come from a curricular set of questions. Suddenly we’d moved on to another rarely-used writing approach: second person perspective.

“It’s like the writer is inside of the reader’s head,” said another.

All agreed that it would be hard to read a whole book written that way. We talked about how it could be an interesting technique to try. I told them about a homeschooling article I’d had published which was written in second person. (That was such a fun article to write–and the format so brazenly stolen from Lorrie Moore’s short story “How to Become a Writer”–that I encouraged H to write one of his college application essays in second person, and he cranked out “How to be a Filmmaker”. It was a great way to get a kid who doesn’t like to talk about himself talking about himself.)

That morning I ditched the writing exercise I’d planned, and the kids tried writing a short scene in second person, present tense. One boy’s scene of you going into an ice cream shop was particularly memorable.

-Ralph Fletcher, What A Writer Needs

And, I would add, you learn to write by reading and thinking like a writer.

(If you’re curious about writer’s workshops, keep stopping by the wonder farm! I’m currently working on a book chapter on facilitating workshops, which I’m hoping to release as a stand-alone e-book. Just doing what I can to foster the proliferation of homegrown writer’s workshops–because I think they’re rather magical in their ability to motivate kids’ writing.

And if you’re interested in being an advance reader for the e-book, willing to offer me constructive feedback, please let me know!)