“these are all things that i just do for fun” 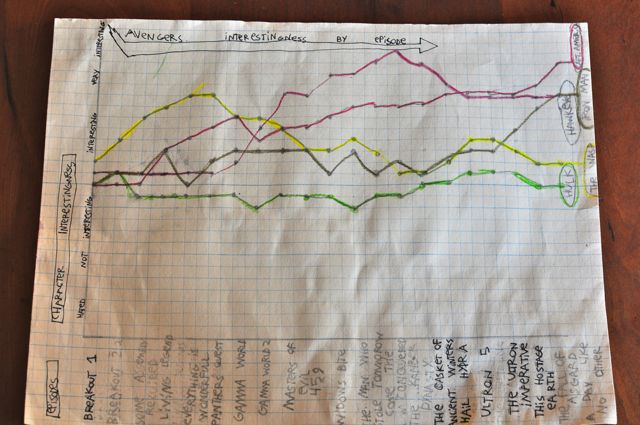 There it is again. That wrinkled, hand-drawn Avengers graphic. This is the third time it’s appeared on this blog, which is certainly a record for Wonder Farm recycling. I hope you can excuse the chart for displaying itself again, though, because that funny little sheet of graph paper has generated some excitement around here lately.

Remember that post I wrote a month ago, about how I stumbled upon that fantastic Iliad graphic by visualization designer Santiago Ortiz, and how it reminded me of a few simple graphs T had drawn? And how Ortiz and I had connected via Twitter? Well, suddenly a new comment appeared on that post last week. The Data Artist in Residence from The New York Times, Jer Thorp, showed up just before dinner, to compliment my kid’s work! And for the next few days, hundreds of other folks showed up too, some of Thorp’s 10,000+ followers on Twitter, who arrived after he tweeted about a simple graph drawn by a 10-year-old and proclaimed it “AWESOME”.

Apparently Jer found his way to T’s chart after tweeting: “Of all the things that I have deep-seeded nerd knowledge about, the Avengers is easily top 3.” And Santiago Ortiz responded by tweeting a link to T’s chart and my post.

Beyond exciting. I thought: I should write about it on the blog!  And then I thought: why? Did I just want to show off?  My kid, New York Times artist, la di da!

I decided to think about that a bit.

If you have fifteen minutes or so, give it a watch. Sure, it’s a talk about data, which may sound only slightly more interesting than a talk about finance, but allow yourself to be surprised. Jer is endearing; he’s a storyteller. Which is partly the premise of his talk, as you’ll see: there’s something essential in the interaction between data and story. When he gets to the data point showing the moment he met his girlfriend, see if you don’t get goose bumps. I actually teared up a little, but I’m a sap.

And his visualizations? Stunning. Beautiful in a way you never thought computer graphics could be.

Just as my show-off self was simmering down, and deciding not to post about this, Jer emailed this weekend, asking if he could use T’s graphics in a talk he’d be giving.

And then yesterday he posted this. His own series of Avengers visualizations. They are gorgeous and fascinating. (To see them in all their glorious, filagreed detail, click on the photo to see it on Flickr, click again to get to Lightbox view, click “view all sizes” on the right, and then click “original.”) Wow.

In that post, Jer gives credit to his inspiration for these visualizations. He mentions a particular ten-year-old.

Admiring his work, I flashed back to something Jer said in his TED talk. It was just an aside, after he showed a handful of his graphics, including the one of people saying good morning on Twitter.

I watched again, to get his words right.

“These are all things that I just do for fun. It might seem weird…I’m building tools for myself. I might share them with a few other people, but they’re for fun. They’re for me.”

That was when I knew I needed to write this post. And it wasn’t about showing off. (Well, not mostly.)

Jer made these incredibly complex, compelling visualizations for fun. For himself. Just as T had, when he spent a mind-boggling amount of time copying a long list of Avengers’ episode titles from Wikipedia to a piece of graph paper. For fun. For himself.

What propels a person to study a comic book series and to try to understand it though graphics? I suppose you’d have to ask Jer Thorp, or Mr. T. But clearly it has something to do with a passion for the topic. That sort of passion is important–yet it doesn’t have a place in traditional school learning. Passion-fueled learning is a powerful thing. We have to allow kids to pursue the fascinations that burn for them, even if they’re fascinations that may not seem particularly worthwhile to us, even if they’re fascinations with comic book characters. We need to give kids time to play with those fascinations, to fiddle with them, to create with them.

In his TED talk, Jer makes the point that we need to put data into a human context. There’s so much information out there; we need to humanize it, let it tell a story. In a similar way, we need to put learning into a human, individual context for our kids. We don’t learn by covering a bunch of information, those infinite bits of data that are out there, expanding exponentially, like all those Avengers on their radial graphs. We learn by engaging with what fascinates us, and seeing what we can do with it.

That’s what Jer Thorp does. When I look at his work, I realize: he still thinks like a kid. He wonders. He plays.

We need to let our kids do that too.