new york, in snow and spotlight 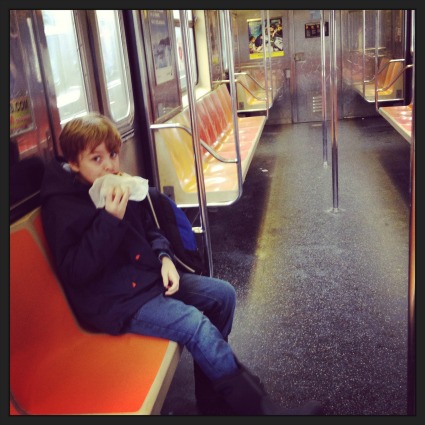 Mr. T and I had an adventure last week.

You may remember, back in October, that I wrote about my older son’s Kickstarter project, a film he planned to make as part of his college studies. Well, the project got funded, but a few days before the shoot was supposed to start, a little force called Hurricane Sandy powered through New York City and cancelled plans left and right–including H’s shoot. And because the university’s film equipment was assigned to other students for the remainder of the semester, H learned that he’d have to wait until the following semester to shoot his project.

Disappointing, but there was a silver lining to those storm clouds. H had been struggling to cast one of the three actors: a young boy who watches his parents wrestle with their own issues on the day of the moon landing in 1969. About a week before the shoot was scheduled, H wished via phone that he could use his brother in the film. T has acted in his brother’s films since he was a toddler. I wrote about their last collaboration more than three years ago, back when T was barely eight. He appeared in the title role of H’s film The King, about a boy who lives alone on a post-apocolyptic-ish island.

We checked out flights from California to New York to see if T could take the role, but the last-minute flights were too expensive.

When the shoot got rescheduled for February, H had a second chance to cast his brother in his film. So last week T and I got on a plane bound for New York.

Mother Nature seems to have issues with this film; Sandy was just her first strike. You may remember hearing about a blizzard on the east coast last week. T and I were lucky to fly into New York City on Thursday night; if we’d tried to get there on Friday, when the blizzard hit, our flight may have been cancelled.

The snow was a rare treat for the younger of my California kids. He insisted on walking the twelve blocks home from dinner Friday night, rather than taking the subway. He hucked snowballs at me, even though I tried to use my camera as sanctuary. He reveled in the whiteness of it all. 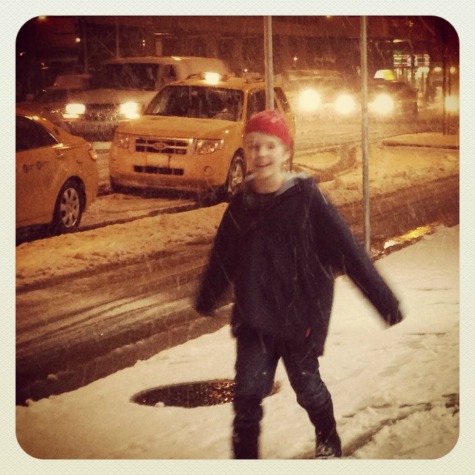 The snow was a bit more problematic for the older kid. First, the university insisted that he cut short his first day of shooting, on Friday, so the student crew could get from the Bronx locale back into Manhattan before the storm hit. That put H several scenes behind schedule. Worse, though, was the fact that the film was set on the day of the historic moon landing–which happened to occur in July. The final, pivotal scene was supposed to take place in the family’s backyard.

You can bet that there wasn’t snow in the typical American backyard in July 1969. Which made for a tricky shoot, considering that after it snowed all night on Friday, the film location looked like this: 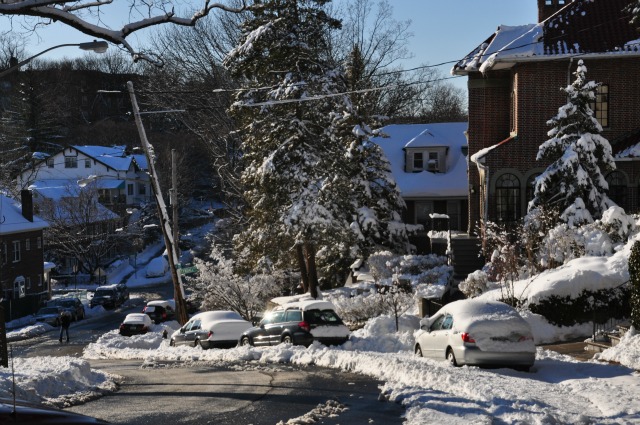 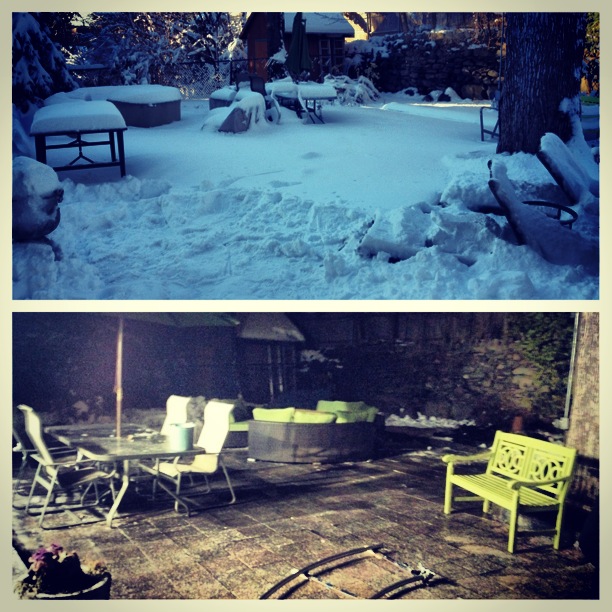 I spent most of the three-day shoot in a back room, knitting. I didn’t think H needed his mom lurking around while he worked. He had his work cut out for him as it was, what with the weather and the fact that he was both director and cinematographer on the project–and he was shooting on film. And, of course, he was directing his little brother. Apparently T did an impressive job–acting like a pro, taking direction well and standing quietly between takes. If you know T and his clownish tendencies, you understand that this is no small accomplishment. (Of course, in between scenes, he spent every moment trying to crack up the crew and sneaking soda and packets of fruit gummies.) 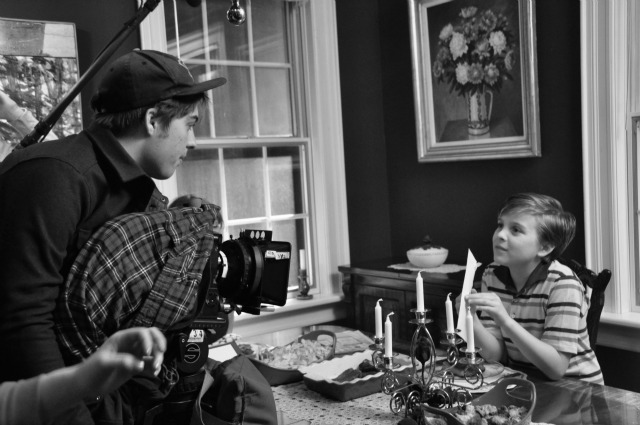 The final shot, late on Sunday night, presented one last challenge. It was supposed to be a shot of the family standing in the backyard together, and looking up at the moon. Trouble was, there was snow up in the very tall trees, and not even the force of a dozen young film students could do anything about that. Finally, they decided to change the direction of the shot to a spot where the snow seemed less obvious. They set up the dolly track and got to work. At this point I stopped worrying about bugging my kid, went out to where they were shooting and tried to get a few still photos of the action. I’ve never seen a dolly shot filmed. It was an impressive bit of choreography, with at least five students working together to move the dolly forward on the track, and to simultaneously raise the camera up on a long arm. One student ran a fog machine, another held a board reflector. Each seemed to understand his or her role, and they rehearsed and then filmed the shot together again and again and again. 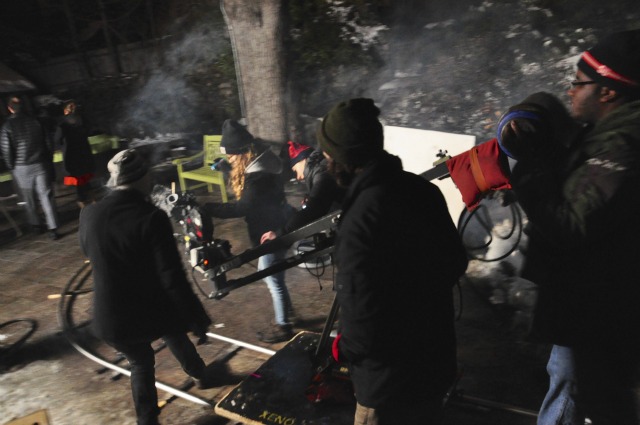 What struck me most at that point was how much these young people knew. Most were not over twenty. There wasn’t a faculty member helping them, or a senior student consulting. They were making a film and they knew how to do it. These days in the homeschooling and education world, there is a bit of a backlash against college. A questioning of its practicality and its exponentially escalating costs. I’m glad for the uncollege movement. I don’t think every young person should see college as the only means to adulthood; I don’t think young people should spend their early adulthoods sitting in lecture halls and taking multiple choice tests and racking up student loans. Still, I hope that homeschoolers don’t give up on the notion of college without considering what it might mean for them. I think that many kids who were once homeschooled do college differently. They don’t just let college happen to them; they dig into it and get what they need from it. They do real work. They let college be more than endless hallways of lecture halls; they let it be a laboratory for learning how to live. A few years in, when the real work starts to matter more than the midterms, you know they’re on the right track. (Or dolly track, as the case may be.)

It’s always exciting to be in New York. This time particularly so. It was exciting to see a city baptized in white–this California girl has never seen such a sight. Exciting to see my youngest in a vintage rugby shirt and slicked-back hair, acting his heart out. And exciting, so exciting, to see my oldest, against all odds and blizzards, transcribe his imagination to film stock.