become a writing mentor to your child, part 5: grammar, by ear 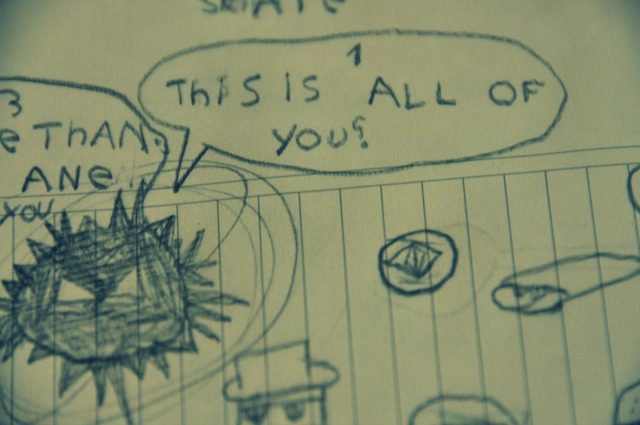 A few years ago I sat in a coffee shop, preparing for a homeschool conference workshop I’d be giving at the hotel next door, on writing with kids.

There was a family a few tables over. They wore conference name tags so I knew they were homeschoolers. The two parents chatted while their son did a worksheet. Or ostensibly did a worksheet–he seemed to be getting distracted. The parents kept directing him back and then resuming their conversation. He kept getting distracted. The mother admonished: You’re having a hard time keeping your focus. You’re a third grader now!  She and the father chatted; the kid got back to the worksheet, but soon resumed his dawdling. This went on for almost an hour. Look, the mother said finally, frustrated. You just need to write a complete sentence with a subject and a predicate!

If I’d been drinking my cappuccino at that point, I would have choked. The kid was eight or nine!

Plus, I couldn’t remember what a predicate was myself.

(I didn’t tell the parents to come to my workshop because I felt guilty about eavesdropping. But I wanted to.)

This little episode broke my heart a little. It demonstrated everything wrong with grammar programs: a) they teach stuff kids don’t need to know; b) they’re boring; c) they assume that kids can’t learn grammar and punctuation in the context of their reading and writing.

“I discovered that for all my fine talk I was no match for the parts of speech—was, in fact, over my depth. Not only that, I felt uneasy at posing as an expert on rhetoric, when the truth is I write by ear, always with difficulty and seldom with any exact notion of what is taking place under the hood.”

You know who E. B. White is, don’t you? In addition to being a most excellent essayist and the creator of Wilbur the pig and his spider friend in Charlotte’s Web, he is the coauthor, along with William Strunk, of the writing guide The Elements of Style, a book likely required for some course or another in your past life as a student.

I figure that you might listen to the author of a classic writing guide if he says grammar is something even he didn’t fully understand. He wrote by ear (and ignored much of his own grammar and usage advice in his essays and novels.)

Your kids can learn grammar by ear too. They don’t necessarily need to understand what is going on under the hood. In other words, they might be able to, let’s say, avoid dangling modifiers without knowing that the things they’re avoiding are called dangling modifiers.

Grammar programs tend to introduce reams of terminology and rules in order to teach concepts, in order to have a language to teach with. Honestly, kids don’t need to know that language. (I would argue that the only people who really need to know detailed grammar terminology are editors and people who want to know it.) Oftentimes these terms and rules confuse kids and ultimately confound their writing process. On the other hand, if you allow kids to learn grammar and punctuation more naturally, and in the context of their own writing, they will intuit, like E. B. White, what’s going on under the hood. (More on this below.) When they’re older, they may take an interest in the specific terminology and rules–at which point the rules and terminology will make more sense. It’s much easier to apply names and rules to something you already understand.

how grammar programs are boring:

Many young kids, upon meeting the mark, become infatuated with it. They use them at every opportunity! They end sentences with whole cabooses of them!!!!! One Wonder Farm reader shared how her daughter used one after her name for two years!!!!!!!!!!

Young kids love exclamation marks because they allow them to express themselves with all the natural enthusiasm of their youth.

Consider then, how fun it would be to insert exclamation marks after appropriate sentences listed on a worksheet.

It would be no fun. If the sentences aren’t yours to begin with, there’s no thrill in expressing them enthusiastically.

It’s boring to learn grammar and punctuation in isolation. Plus, information “learned” in isolation tends to get forgotten. Like the kids in my last post who couldn’t apply what they’d mastered for spelling tests to their everyday writing, kids often forget to apply practiced grammar and punctation rules when they write on their own.

“Grammar is a piano I play by ear, since I seem to have been out of school the year the rules were mentioned. All I know about grammar is its infinite power.”

–Joan Didion, “Why I Write”

There’s that “by ear” thing again, from another esteemed writer. Like White, Didion may not know the rules, but she uses them to great effect.

If you want kids to learn grammar, you would be better off boring them less with the rules, and focusing more on its infinite power. On its potential as a really cool tool. Unless your kid absolutely loves his or her grammar program, you would probably be better off using that time to read and write.

how kids can learn grammar and punctuation in the context of their own writing:

“I can remember picking up my father’s books before I could read. The words themselves were mostly foreign, but I still remember the exact moment when I first understood, with a sudden clarity, the purpose of a paragraph. I didn’t have the vocabulary to say ‘paragraph,’ but I realized that a paragraph was a fence that held words. The words inside a paragraph worked together for a common purpose. They had some specific reason for being inside the same fence. This knowledge delighted me.”

–Sherman Alexie, “Superman and Me”

Your kids may not pick out how paragraphs work as precociously as Alexie did, but I’m guessing that if you snuggle up and read to them on a regular basis, they will make similar insights on their own. Listening to Farmer Boy at five, Mr. T pointed to the last word in a paragraph, which appeared on a line by itself. “Why is there only one word there?” he asked, and I explained the notion of paragraphs. I wish I’d thought to describe them as fences.

We’ve already explored, in this post, how kids who grow up in language-rich homes pick up qualities of good writing–including grammar and punctuation–by osmosis. Through being read to, through reading, through writing, through family conversation. This constant immersion in language saturates kids. They absorb more than you might imagine. They’re like infomercial miracle sponges.

At one point when H was, maybe, twelve, and paying attention to how his little brother talked, he became fascinated with how, in English, we learn to use the word a before words beginning with consonants, and an before words beginning with vowels. A cookie. An ice cream cone. Young kids don’t do it–they tend to use a before all words–but as kids get older, they eventually begin using an. Correctly.

“How do kids learn to do that?” H marveled. “You don’t teach them.”

Nope. You don’t teach them. They pick it up.

There are so many opportunities for kids to learn about grammar and punctuation in the course of what they’re already doing. For example, you might take dictation from your child because he or she doesn’t want to write independently. But did you consider how much grammar and punctuation might come up in the process? I didn’t, until I found myself describing semi-colons to my seven-year-old during a dictation session. From that day on, I started paying closer attention to what happened as I took dictation from him. I became astounded at how much he was learning.

You can look at interesting punctuation in books you read together; you can talk about intriguing sentence construction as you come across it. I have never done grammar programs with any of my three kids, but grammar and punctuation came up plenty. My older son learned to use question marks before he knew they were question marks–he called them huh signs. My younger son often instructed me to add parentheses into his dictated writing by telling me to put in those things and demonstrating with cupped hands. My daughter loved to revise paragraphs she’d dictated in which a character’s name appeared a bit too often, replacing those instances with an occasional he or she.

Why did my kids do this? My older son had asked about question marks when he saw them on the page during a readaloud. My younger son learned about parentheses when he’d dictated particular lines and I’d suggested that parentheses might be appropriate, considering how he’d said something. My daughter recognized that saying a character’s name too often sounds funny because she was an avid audiobook listener.

They learned about grammar and punctuation eagerly, in their everyday lives as readers and writers. Grammar has always been a fun, wordy-nerdy thing in our home. My older two, after they decided to go to high school, encountered English classes which required lots of essay writing, and fairly comprehensive grammar instruction. They didn’t like the grammar instruction–bo-ring!–but it came easily to them. They already intuited what was being taught. They already applied it, for the most part, to their writing. They may not have previously known the terminology for what they were doing; they may not have known what was going on under the hood–but they knew how to drive the car just fine. They were enthusiastic readers and writers. It came with the territory.

tips for helping kids with grammar and punctuation:

What experiences have you and your kids had with grammar and punctuation? Have they been a chore? Points of interest?  Please share!
You can read all posts in this series here.