become a writing mentor to your child, part 4: that niggling thing called spelling 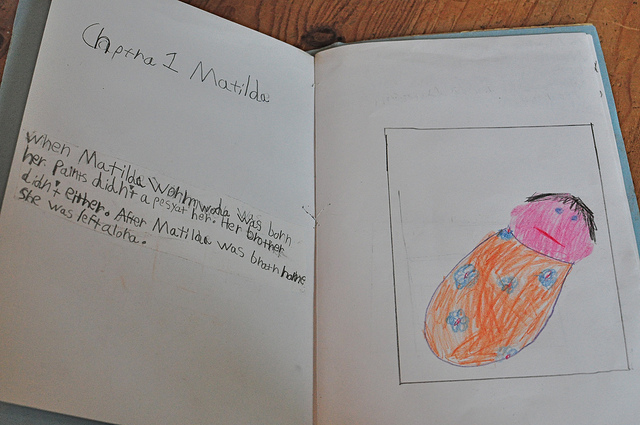 “So, what did I do with my kids? Well, I unschooled them. But like a lot of wives out there, my husband wasn’t always as supportive of unschooling. He has trust issues (and after all the years he spent in school, no wonder he did). So, every once in awhile he would have me do something ‘schoolish’ with the kids. You know, just to be sure they were learning. One of the most painful memories of this ‘schoolishness’ was when our firstborn, then about 9 (he is now 22), came to show me a book he had been writing and illustrating. It was awesome, I did tell him that. It was 40+ pages in a spiral notebook. He’d really been working hard on it. But of course the spelling and punctuation weren’t great. So, per my husband’s suggestion, I proofread a page or two. My son was crestfallen. He didn’t want me to be a teacher and do that. He wanted me to be a reader, enjoy his story and discuss it with me. I remember how hurt he looked when I made marks on his writing. He never showed me anything he ever wrote again, and he didn’t write for a long time. It still hurts me when I write this. Of course, I apologized and asked him to forgive me for being a ‘teacher’ instead of a ‘reader’, and he did. But, the damage was done, for quite a bit of time. By overlooking his wonderful story to point out misspelled words, I devalued my son’s burgeoning written voice.”

In many ways, being a mentor is about learning what not to do. Which is why I want to delve into this series with a few posts about spelling, grammar and punctuation. These are minor parts of writing. Handmaidens, really, that help us convey what we want to say. Part of me hates the idea of addressing them first, and raising their stature to something bigger than they are. But I know that many parents struggle with seeing past spelling, grammar and punctuation issues—spelling in particular. So let’s gather for tea and gossip about these handmaidens a bit. Let’s put them in their place. Let’s figure out what to do about them before you do something drastic—something that might unwittingly kill any chance your kid has to love writing.

First up, spelling, because it’s the skill that seems to niggle parents the most.

It began to niggle me when my second kid started writing.

My first kid never struggled much with spelling. He’s a very visual learner: taught himself to read at a young age, jumped into writing at the same time. Once he’d been writing for a while, though, he wanted nothing to do with “invented spelling”—the sort of spelling in which kids simply spell words as they think they should be spelled, without worrying about conventional spelling. If he was going to spell a word, he wanted it to be right. I suspect that as a visual learner, he could see that there was something wrong with his misspelled words, and it bothered him. It frustrated him less if I simply told him how to spell the word he needed to spell. So that’s what I did. H became an adept speller fairly quickly and painlessly.

Not #2. It became clear early on that she was not a born speller. But she didn’t let this bother her. The girl loved to write! She saw her older brother writing, and she wanted to do it too. She wrote lists of Beanie Babies and poems about her ballet class and menus for her play kitchen. One week when she was seven, she secretly made a 23-page book with an entire retelling of Roald Dahl’s Matilda, based on her audiobook listening of it. She even stitched the pages together and made a hard, cardboard cover.

Then she presented it to me one morning, pulling it from behind her bag, shyly and proudly.

Because I was a parent who had already made one of my children scream, “I hate writing!” (see the first post in this series if you need to be reminded of this particular parenting nadir), I knew not to comment on the spelling in the book, even though the first sentence looked like this: When Matilda Wormwoda was born her paints didn’t a pesyat her. (When Matilda Wormwood was born her parents didn’t appreciate her.) The spelling became more baffling as the book went on. There were some sentences that I couldn’t begin to decipher.

So I asked Lulu to read it to me. And I was amazed at the scope of her project. She had retold Dahl’s entire book! She had used words like appreciate and startling! (Although they were spelled a pesyat and srtleing.) I kept my focus on that.

Lulu continued to write with abandon, but her spelling did not seem to improve much. I worried a bit. Sometimes her spellings looked almost nothing like the word she was attempting. (Sily for smile, for example.) Words she spelled correctly one day would get misspelled again the next. Unlike her brother who despised invented spelling, she seemed to be an ambassador for it. It was as if she glossed over the words quickly when she wrote, and couldn’t be bothered with their specifics. Or she just didn’t see the words. She eventually began to recognize that spelling was a problem for her. We tried out a few spelling programs here and there, but her heart wasn’t in it. We never stuck with them for long. Lulu would rather spend the time writing.

Plus, I didn’t have much faith in spelling programs. During my first year as an elementary school teacher, I gave spelling tests, because this is what teachers did, and parents liked them. It was one way that parents knew how to help their kids. Here’s what I discovered about spelling tests: there are two types of kids who do well on them. One type is the kid like my firstborn, who simply has a natural sense of how to spell. The other type is the kid whose parent helps him or her practice for spelling tests. What I noticed about this second type of kid is that despite 100% scores on spelling tests, knowledge of spelling did not carry over into everyday work. Unless these kids were natural spellers, they continued to misspell words in their writing—even words they’d spelled correctly on their spelling tests.

My second year teaching I stopped giving spelling tests. They were a waste of my students’ time.

Sure, there are some spelling programs that claim to teach kids how to look at words, and how to see the patterns in this crazy stew of many languages that we call English. But unless your child is dyslexic, or unless your child really wants to improve as a speller, I question the worth of them. If you feel strongly about using a spelling program, you might ask yourself these questions: does the program really seem to improve your child’s everyday spelling (not just spelling related to the program)? Do you and your child enjoy the time spent with the program? Does the program’s focus on correctness seem to hinder your child when he or she sits down to write something independently?

And the big one: might the time spent working at the spelling program be better used enjoying books together, and cultivating a love of writing?

Some kids simply seem to be born spellers and some aren’t.

So, did Lulu’s spelling ever get better, without the help of spelling programs? Yes. What seemed to help most was typing on the computer and being able to use a spell checker. Initially I thought that a spell checker would only make her spelling troubles worse by taking care of the problem for her. But having her misspellings underlined by the program was actually helpful: Lulu began to recognize which words she regularly misspelled, which is something natural spellers do routinely. Also, when the spell checker provided a list of possible alternatives to misspellings, Lulu needed to examine the words to select the correct one. Again this seemed to help her look at words in the way a natural speller does.

The biggest help: Lulu wrote a lot. And the more you do anything, the better you get at it. (She is also quite a reader, but I have doubts about how much reading effects the ability to spell—at least for kids who aren’t born spellers.)

At seventeen, Lulu is a pretty good speller. She is able to write in-class essays in high school, without her spelling being an issue. She still struggles with spelling more than a natural speller might, and knows that if she has an important document to share, she should have someone proofread it. Just in case.

I’m glad that I didn’t let Lulu’s early challenges with spelling get in the way of her becoming an eager writer. Backwards as it might sound, it was her writing that taught her how to spell.

Tips for helping kids with spelling:

Do you or your kids struggle with spelling? Has this been a hindrance to writing? What have you done to try to overcome it?
You can read all posts in this series here.