lemony snicket is our man 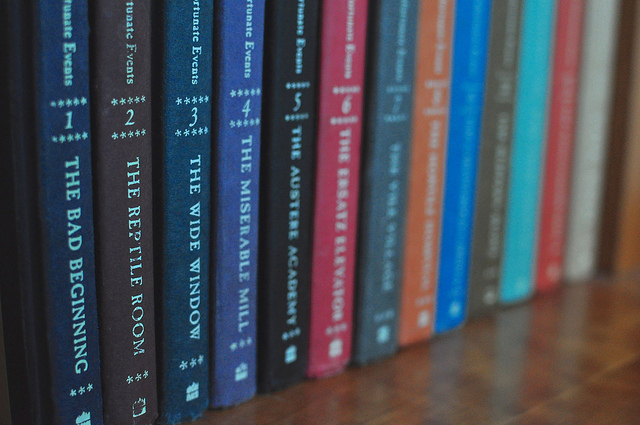 I’m rather fond of essays on Lemony Snicket. In fact, I wrote one myself, and it’s up at Literary Mama today. It’s an essay on my family’s shared love of Snicket, the writer who has served as a literary mentor to each of my kids, even though he isn’t real.

Well, he isn’t real if you lack imagination.

For the Love of Lemony Snicket

I think you’d like it, Mama,” H. said, passing the box of cassettes forward from the backseat of the car.

Our Mary Poppins audiobook had just ended, and we had another hour to drive. The box contained the audio version of The Wide Window, the third book in the Series of Unfortunate Event series. I did not think I would like it.

“Aren’t these books depressing?” I asked. “About orphans who have nothing but bad luck? I don’t like depressing books.”

“They’re not depressing.” H. was nine. He had read the first few books in the series on his own. “Just try it.”

There was such earnestness in my kid’s voice and so many miles of Interstate 80 before us. I clicked the first cassette into the player.

It couldn’t have been more than a few paragraphs in, around the point when infant Sunny Baudelaire shrieks, “Toi!” and narrator Lemony Snicket explains, “By ‘Toi!’ she probably meant ‘I have never eaten a peppermint because I suspect that I, like my siblings, am allergic to them’ but it was hard to tell” that I stopped the tape and said, puzzled, “This is funny.”

You can read the rest at Literary Mama.

P.S. There’s an accompanying writing prompt at Literary Mama, with a chance to get published on their blog. Try it out!

Leave a Reply to StaceyCancel reply