it all came back 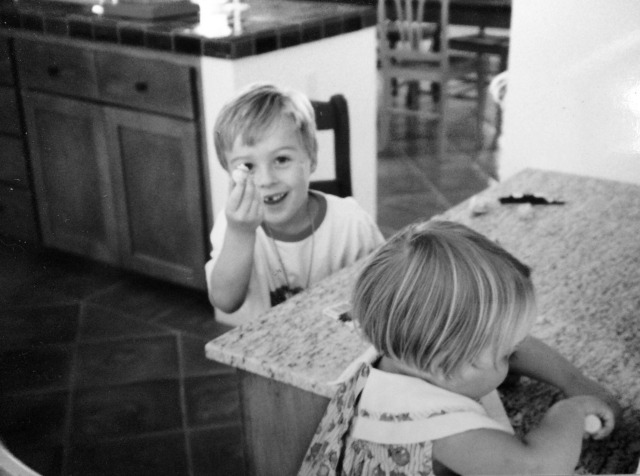 That’s a photo of my oldest two on our very first day of homeschooling. September 9, 1997. Look at my H with his gappy smile–he knocked out that tooth at three–all proud of his clay head creation. Look at my Lulu with that sweet fat cheek, cutting clay competent as anything though she isn’t yet two. The Tamagotchi around H’s neck. Lulu’s hand-me-down sundress and the bobbed haircut I gave her. Ah.

Takes me right back.

Memory is interesting. It’s like a secret room that sometimes requires an access code. Photos can do it.

The other day I was working on a section of my memoir set in these first few months of homeschooling. I wanted to write about one of those times when the magic strikes and everything comes together. I looked back in my journal from those days and saw that I’d written that things were going well–but there were no details on just how they were going well.

I wanted a specific scene.

I flipped through my so-called teacher’s planning book. I’ve kept a lesson planning book since my teaching days, although it only took about two weeks of homeschooling to realize that planning lessons in advance wasn’t going to fly with my own kids. (Hard to make lesson plans for kids who feel free to reject them and have their own better ideas.) I started using the planners to write down what we’d done after the fact–something I’ve kept up ever since, although somewhat spottily in the past few years.

Hmm. That sounded familiar. H often liked acting out stories that I read to him, along with his toddler sister. For a refresher, I googled up The Tale of Squirrel Nutkin because I was too lazy to go upstairs to search for the actual book. I found an online version and began clicking through the pages and WOOSH! Memories flooded in. Apparently I’d hit upon the access code.

H had loved Squirrel Nutkin! I’d forgotten! But as soon as I saw that saucy picture on the cover, as soon as I started reading about that smart-alecky squirrel, it all came back. The other squirrels were wise enough to offer polite dead-mouse sacrifices to Old Brown, the local owl, in exchange for his blessing to gather nuts in his territory. But not Nutkin. He preferred to taunt the owl with riddles, growing more cheeky and impudent each day. He “danced up and down like a sunbeam” before the old guy and sang, “Old Mr. B! Riddle-me-ree!”

And WOOSH! There was five-year-old H before me, doing his signature happy dance, the one he always pulled out when he was feeling giddy or supremely pleased. He bounced side to side before me, arms and legs splayed at right angles, jutting up and down like a marionette. Because, it comes back to me now, I was Old Brown. And H sang to me again and again, “Riddle-me-ree! Riddle-me-ree!”

Clicking through the pages of the tale, there was more. Nutkin’s brother was Twinkleberry, and WOOSH! I remembered how H had directed Lulu to play that role, told her to gather up nuts–or in this case, wooden blocks in a basket. Which was perfect for our bobbed-hair girl at almost-two, back when Chris and I called her The Bag Lady due to her affection for bags and purses and stuffing things into them. I could see her circling the family room carpet, squatting to pick up blocks, adding them to the basket dangling on her fat little arm like a purse on a grandma headed to church.

I could see her, too, pausing at her block-gathering and watching her big brother in admiration, her head bobbing side to side with his dancing. And, oh, how I wished I could gather them both up in the remembering, with those dimples still at their elbows and knuckles, and squeeze them! Wished I could scoop up H at the end of the story, as I now remember doing, and say in my best wise-British-owl accent, “Got your tail!”

A few more shares, if you’re the writer sort:

I love this post by Kate Evans about ignoring the boot camp, existential, masochist voices that say writing must be hard, hard, hard–and how, instead, we might consider it adventure. I’ve spent the past twenty-three years busy with kids, and my writing has always been my secret chocolate bar, the thing I steal time for. Yes, writing can be difficult but, like Evans, I don’t think we have to buy the notion that making art is all about suffering. Evans ends her piece all mystical, quoting OSHO: “Don’t call it uncertainty–call it wonder.” Wonder. You know I love that.

Speaking of adventures, I’m off on a spontaneous trip to the AWP Conference in Los Angeles today! This is the biggest writing conference in the country, held in a different city each year. Two days ago I noticed bunches of writers in my Twitter feed all atwitter about it. I’d never paid much attention before, assuming the conference was expensive and aimed at writing professionals. But when I clicked over and started reading the panel descriptions–hundreds of them!–when I noted the writers who’d be there, and that registration is $270 for three days of writing crack, my wheels started spinning. I live five-and-a-half hours away; I have an uncle who lives near the convention center and is always a willing host. The conference is not likely to be this convenient for me any other year soon. So I sprinted upstairs and sputtered to Chris, “Sweetie, I have a crazy idea,” and he, always an enabler to my crazy ideas, urged me on my way.

Will you be there? Leave me a comment here or tweet at me and let’s meet up!

Heading down I-5 today, giddy as that boy up there, with the clay head and the gap-toothed grin.