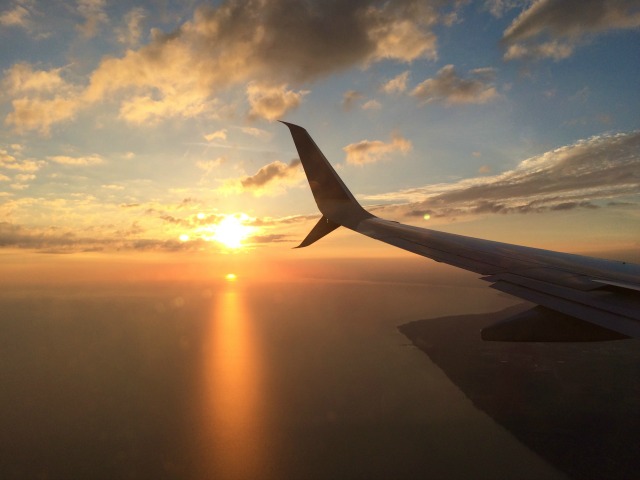 I took a trip to the River Teeth Nonfiction Conference again this June. I thought about writing up a complete rundown, like I did last year, but I don’t know that I could bring back the magic of the original. This year’s conference was wonderful, all the same. If you’re a writer, don’t miss Steve Harvey and Jill Christman’s presentation on The Art of Research, or Kate Hopper and Ana Maria Spagna’s The Craft of Empathy. I took so many notes. I love how this conference is fairly small—about 50 participants to thirteen presenters, which means that you actually get to hang with those presenters. Chat with them over oatmeal, split a bottle of wine, learn of their love of octopuses (and how there is nothing correct about octopi. Right, Kate?)

I’ve had the delight of taking the hour-long shuttle from the Cleveland airport to the tiny town of Ashland, back and forth twice now, with the writer Ana Maria Spagna. She’s a lovely person, thoughtful and generous. This year I finally bought one of her books, a collection of essays called Potluck. I stayed in Cleveland an extra night again this year, and I scarfed down Potluck in the hotel, on the train to the airport, on the flight home. I had finished all but the last ten pages by the time the plane’s wheels shrieked into San Francisco.

Potluck’s subtitle is Community on the Edge of Wilderness, and the essays are about finding community. Many focus on Stehekin, Washington, a remote community of about 100 people, where Spagna has lived for many years. Stehekin is a fascinating place: located in the North Cascades, on Lake Chelan, it is accessible only by boat, floatplane or on foot. I found myself utterly intrigued with this notion of living somewhere so remote, among such a small community of disparate people. Spagna brings it to life. And her writing is beautiful: lyrical and honest, thematic and writerly.

Reading along, I got excited for an unexpected reason: this is the book I’ve been searching for, the model for my own book project. I know that sounds unlikely; let me explain. Potluck is about finding community in an off-the-grid locale. It covers a long span of time. It’s not a memoir of trauma or a big event, but a recounting of the smaller delights and disappointments in a mostly ordinary life. My own story, of homeschooling for twenty years, is not a literal off-the-grid story–I live in an urban place–but a metaphorical one. It covers a long period of time. It’s a story of the small delights and disappointments in an ordinary life.

Yay! Finally someone is showing me how to write this thing!

I sometimes forget how off-the-grid life as a homeschooler can be because I spend so much time with other homeschoolers. I hang out with the other moms (and the occasional dad) at the park every Thursday, where we laugh about how many times we hear I could never do that when we tell people that we homeschool. So many times. It just happened just last week, at a reading at a local bookstore. You homeschool? I could never do that. I chuckled politely, like I usually do. I did not say That’s because you think I’m sitting at the kitchen table with my kids, doling out worksheets, which I’m not. I did not say It’s actually a heck of a lot of fun most days. I did not say Yes, you could.

We homeschooling moms also sometimes marvel at the notion of sending our kids off to school each day. What a crazy idea! Just think what our lives would be like if we dropped them off at school! I suppose this only proves how far off the grid we really are.

I’ve been thinking about this a lot lately, particularly because Mr. T is currently away at camp for ten days. He went to camp last summer too, but Lulu was home from college, so there was still a kid here. But this summer she’s in New York and her older brother is in New York and Mr. T is at camp. And while Chris and I have gotten away on trips alone over the years, this is the very first time we’ve had no kids at home for more than a night or two in 24 years.

I’m getting a preview of what my days will be like come fall, when T goes to school for the first time. This whole concept of sending one’s kids off to school each day is sort of blowing my mind. Oh, I know, H and Lulu went to high school too, but I was still homeschooling then. With Lulu and Mr. T both for a couple years, and then just with T. I’ve been homeschooling kids since H became a preschool dropout, almost twenty years ago.

This is new terrain for me, for sure. I’ll admit my long-running, neon green envy for writers who send their kids off to school. To be able to write in the middle of the day, when the brain is firing and making all the associations? Unthinkable! But that’s what I’ve had this week. I’ve been writing in two to three hour chunks, twice a day most days. After years of writing in nooks and crannies of time, I’m in heaven. This is what my life will be like.

I guess this is a summer of transition for me, of moving from one place in life to another. A trip in its own right. I don’t think it’s quite hitting me yet. I wrote about my own community–a love letter and a goodbye to my homeschooling support group of more than 18 years–for the summer issue of home/school/life, which will be coming out any day. My own off-the-grid community. I couldn’t have done this without them.