let’s get this party started 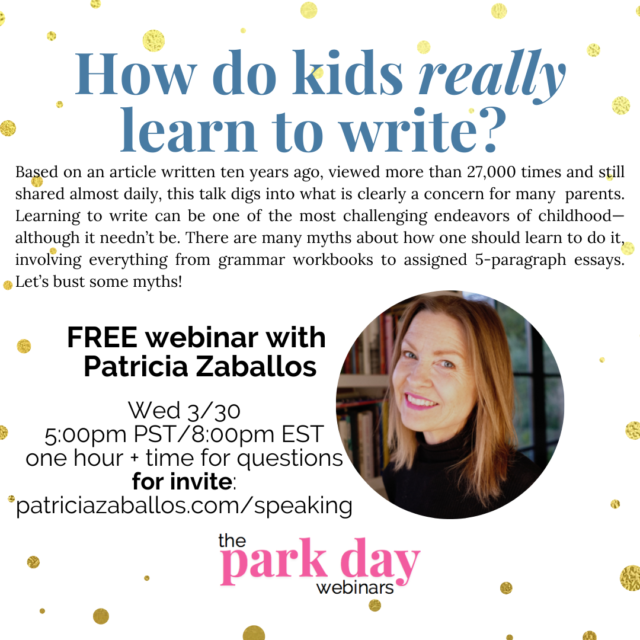 I’m doing it! I’m getting this free webinar series off the ground. Please come hang out with me online on Wednesday, March 30 at 5:00pm PST/8:00pm EST!

As soon as I started playing with this idea, I knew exactly which topic I wanted to explore first.

Turns out, it’s the tenth anniversary of a blog post I wrote back in 2012, which led to this article a few months later: How Do Kids REALLY Learn to Write?

What amazes me about this post is that ten years later, someone still comes by to read it almost daily. It’s been viewed more than 27,000 times, which is really nothing in these times of tiktoks that get viewed by millions in fifteen minutes (maybe? who knows?) but it’s a high number for this little website. I love to track the stats on this post because they fascinate me. Every once in a while someone will share it on Facebook or Pinterest–or in some other way I can’t tease out–and hundreds of people will come read. It’s also generated an incredible conversation in the comments, with lots and lots of people telling their own stories about kids and writing.

Clearly, parents struggled ten years ago when it came to kids and writing, and clearly, they still struggle.

I used to struggle with my own kids and writing. Well, with my first kid and writing. Let’s flash back to a day in 1999. I’ve written about this previously in this post.

H was seven and writing a report on meerkats. He was writing a report because I had assigned him to write a report. I had assigned him to write a report because it had only been a few years since I’d been an elementary school teacher, and I knew that writing simple reports was something that seven-year-old schoolkids did. I’d allowed H to choose the topic of meerkats for his report because he’d been enchanted with the meerkats at our local zoo a few days before, and surely we ought to make a school project of that! Wouldn’t a report on meerkats be fun?

Actually, H was not writing a report on meerkats. He was recopying a draft of a report he’d already written, with DRAFT stamped at the bottom in red ink. H had stamped DRAFT with rubber stamp and inkpad himself—surely that was fun too! He was rewriting the report in his best printing, incorporating a few additions to the text that I’d  insisted he add. Because every seven-year-old wants to expand his or her work and make it better, right? Requiring kids to rewrite their work was part of the writing process in my classroom: draft, revise, proofread, publish. It’s what professional writers do. Naturally it followed that H could do this too. 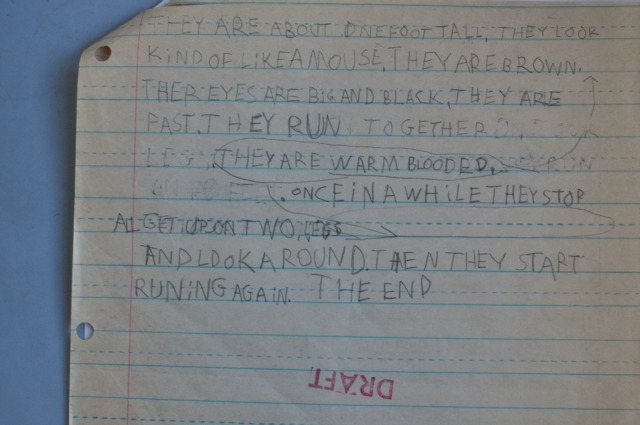 H was writing on a topic of interest, and creating something neat and perfect for sharing with others. Such good work for a seven-year-old! And wasn’t I a fine homeschooling parent?

Cue up the response (I’m sure you see it coming): In the middle of his rewrite, H suddenly swatted his draft and a shock of other papers to the floor, hollered “I hate writing!” and stomped out of the room.

I hate writing. It felt like a punch in the chest. I–I can still feel this in my body–slumped at the bottom of our stairs and sobbed. Writing was my great love, the thing I was trying to teach myself to do, and I’d made my kid hate it.

I knew right then that something had to change. I started thinking about how kids might learn to write differently and, well, it led to a whole lot of rethinking about the school model. It led me to start up my first homeschool writer’s workshop. It led me to think of my own process as a writer, and to really watch my kids as they learned to write–and I began to see that there might be a different way forward.

I’d love to chat about this with you! Some of the ideas we’ll be exploring in the webinar should be helpful for parents of young kids; others will be helpful even for parents of teens. And I’m hoping that questions generated in this first webinar will suggest ideas for future webinars.

If you don’t need this right now, maybe you know other parents who might benefit? Maybe you’d consider sharing this post with them? One thing I’ll say is that past participants in my workshops usually walk away feeling relieved at how much they’re already doing to create writers in their homes, and inspired to find their own methods by following the lead of their kids. Please consider joining us.

Note: I hope to make a recording of this webinar to send to all who have registered–but I’m new to webinar-hosting, so I may not pull it off this first time. If you’re interested in a recording, please sign up and I will do my best!

—Casual zine. This is “a bimonthly recipe zine featuring California-inspired vegetarian meals” from the creator of Naturally Ella and I love it! I’m a real cookbook snob and it isn’t easy to impress me, but I appreciate Erin’s approach to component cooking, and everything I’ve made from two issues–so far–has been delicious and a little different from the usual. Recipes are all vegetarian; most give vegan options. I went digital with my first issue, but liked it so much that I went back and bought the physical zine, which I recommend! They’re small and beautiful and so much nicer to cook from than a screen.

—McCartney 3, 2, 1. My friend Tina recommended this Hulu series in which Paul McCartney “sits down for a rare, in-depth, one on one with legendary producer Rick Rubin.” It’s a fun follow-up if you enjoyed The Beatles documentary Get Back. Rubin pulls out different parts of specific songs on the sound board and the two geek out delightedly about how they were recorded and the stories behind the songs. I especially loved the episode about Paul’s bass-playing, and how he says, “I’ve grown to become a fan of The Beatles. Back then I was just a Beatle.” (Back to eating plants: it’s hard not to wonder how decades of a vegan diet have impacted McCartney’s mind–his memory is amazing.)

—Winter. When I worked with Sabrina Orah Mark, she told me she thought I’d love this book by Sarah Vap, and man, she was right. It’s a book of poems about trying and trying write a single poem for twelve years with a mind constantly interrupted by mothering three young children and concerns for the greater world. It’s utterly fascinating how Vap replicates her mind state with words and syntax. The book is odd and interesting, and probably not for everyone, but if you enjoy experimental forms and the subject of motherhood, you might love it like I do. It’s a little hard to find; I ordered directly from the publisher at that link above.