Well, we are just ripping along with the 100-Species Challenge. At this rate, we’ll get to our 100th species about 75 months from now, which puts us at the beginning of 2015. That’s actual statistics, not hyperbole.

I’ll try to do better.

This was a fun one though, so I thought I’d share it here. Usually I’ll just post them on the 100-Species-Challenge page in the sidebar. 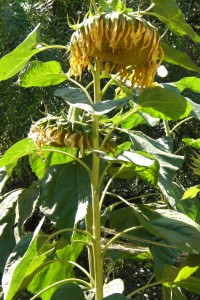 Our sunflower house never quite grew a roof. Probably due to my neglectful watering of the morning glories. (Oh, how I hate to water by hand.) But the sunflowers thrived, and are now a sad cluster of heavy-headed, hump-backed old men. 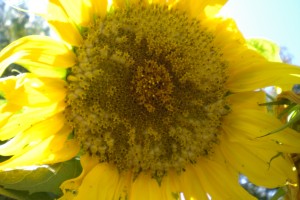 This photo was taken a month ago. They are much more droopy and pathetic-looking these days.

Interesting facts: Mr. T and I had a fun time dissecting a head, and looking at it under a microscope using Anna Botsford Comstock’s Handbook of Nature Study .*  We learned that the large flowers are actually “heads” made up of many florets–one for each eventual sunflower seed. There are special ray or banner florets at the edges of the head, each providing a single petal for the large flower-head. The florets open and ripen from the outside of the head first, then toward the middle, in concentric rings. 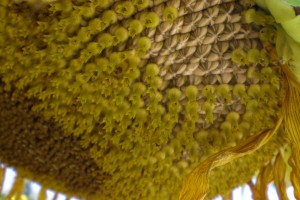 It’s fascinating to examine how the florets are arranged in groovy radiating spirals, which have something to do with fibonacci numbers. Also how each single floret has all the flower parts–stigma, anther, corolla… There are hundreds of them on each sunflower! No wonder the bees love them!

We also found some cool little unidentified metallic beetle-ish creatures in the heads. And then we discovered a virtual nursery of ladybug larvae on several of the leaves! Tiny ones, huge ones, discarded exoskeletons, as well as spanking new ladybugs. Wish I had a camera with a nice macro lens.

Lots of fun from one packet of sunflower seeds–even if we didn’t get a house in the deal.  And we’ve got a whole lot of seeds to roast. 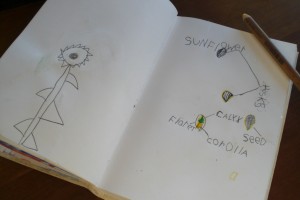 * This is a popular book among Charlotte Mason fans. (Can I call them Masonites? Or does that make them sound like wooden boards?) I just found a used copy this summer, and I’m impressed. There are thousands of entries of animals, plants and “earth and sky”. Each gives a thorough description of the item, as well as a series of questions to consider as one studies it. Such as, “Describe the shape of the open corolla. Look at the brown tube with a lens. How many little points projecting at the top and bottom on each side of the tube?” There are even poems included for many species! The book, however, was published in 1911, so you should balance your research with other sources. For example, Comstock writes that the sunflower is part of the family Compositae–it’s since been shifted to the Asteraceae family. There’s so much good stuff here, though, that it’s still a fabulous resource, even after almost 100 years.