glitches along the way

“I’ve been loving this series, but I’m wondering if you could write a little more about how you introduced dictation with each of your kids and how you’ve sustained the habit of this way of writing with them. My four-year-old daughter periodically asks me to take dictation but I’d love to do even more of it with her. My seven-year-old boy used to have me copy down his stories when he was younger but now doesn’t ask and rebuffs my offers to write down his ideas.

If you’re up for writing about it, I’d love to know more about getting started and keeping things going.”

There’s a lot to respond to here, but let’s start with getting started.

I threw out a few ideas in the post Getting Started with Taking Dictation. I think that for a child who “rebuffs my offers to write down his ideas,” it might be worth trying to write down what he says when he’s already talking about something that excites him. As I mentioned in my post, you could ask the child if you can transcribe his thoughts for your own records. (Sort of like taking pictures to remember him at a certain age–you’re simply trying to capture how he talks at, say, age seven, for your own memories.) I encourage parents to keep brief journals of what their kids say: funny insights, quirky childish pronunciations. A record of how your kids spoke as they grew is a treasure. I never want to forget how Lulu asked, “Is plump a nice way to say fat?” when she was four, and “Is gone a nice way to say dead?” Such a journal can also be a great place to try to capture longer conversations. If your kid is rambling on about his latest Lego creation, you might say, “Can you repeat that for me so I can write it down? I like to remember what you’re thinking as you get older, just as I like to take pictures of you.” Try to catch them when they’re already mid-conversation and fired-up about something, when they already have something to say.

For kids who are leery of even this, you can try writing down what they say without telling them you’re doing so. Then share what you’re up to–you’re keeping a record for yourself–and re-read what you wrote, asking if you got it down right. Some kids will embellish at this point.

The idea behind such possibly covert acts is that you can get kids to dictate without realizing that they’re dictating. They’re just talking about what they like to talk about, and you’re keeping a record of it. I think this helps some kids get over the writer’s block that may show up when a parent asks them to dictate something. Once they see how painless it is to get their thoughts in print, they’re often willing to do it again.

Families homeschool in different ways. In my family, we have a regular time working together, and I encourage as we go. I might say, “I’d like you to have some practice writing because it’s a skill that I think you’ll find helpful as you get older. I’m happy to help you come up with ideas, and I’ll write for you if you want. Let’s see if we can think of something you’d like to get down on paper.” I suppose that since the expectation is there, my kids have been willing to go with it. They put their energy into finding a topic that intrigues them, and I give them complete freedom with this. Some days they don’t feel like writing or dictating, and that’s fine. But most days they’ve been excited to express themselves this way, especially because I was willing to do the physical writing for them.

Other families don’t want to set such expectations. They want the desire to write to come completely from within the child. For these families, your challenge will be finding authentic reasons to encourage writing. Ultimately this should be the goal for all of us. We want our kids to write because they are compelled to write, and because they enjoy it.

Audience is often what it takes to motivate kids to write. Finding audiences for kids’ writing could be a blog series in its own right. There’s so much to say! One of my favorite means of encouraging writing is to start a writer’s workshop. This is simply a regular gathering in which kids meet to share their writing. I’ve been facilitating these workshops for homeschoolers for years, and I’m still flabbergasted at how motivating it can be for kids to have a chance to share their work, and to hear the writing of others. I’ve had the pleasure of working with some kids from the time they were beginning writers all they way through their teens. Some of them wrote their workshop contributions through dictation for several years. This allowed them to writer longer, more interesting stories, which was always a goal, since they’d be sharing the work! Writer’s workshops offer big results while being fairly simply to facilitate. Again, I could write a whole series specifically on writer’s workshops–and maybe someday soon I will. 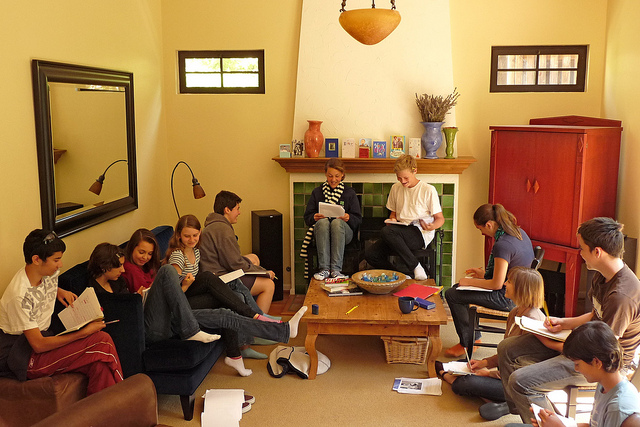 Other opportunities for audience: writing (or dictating) letters to people who are likely to respond; writing family newsletters that will be read by others. Starting a blog on a favorite topic, which can be privately shared with select readers. Older kids might find online audiences: my son wrote for the fan site for the Eragon books for a few years; my daughter wrote as a member of the girls’ editorial board for New Moon Magazine. Group activities can provide wonderful opportunities. For example, when my oldest and his friends were young and obsessed with baseball, one homeschooling mom gathered several of them together to write a baseball newsletter which was distributed within our homeschooling group. Many of the kids “wrote” their newsletter submissions through dictation. Look at your own kids and their friends and their interests and see what you can whip up!

Several months back, reader Cathy T. left this comment sharing how her boys found audiences for their writing based on their interests:

“So, as for learning — we have used his interests from the beginning. Trains – let’s learn about trains, examine train schedules, read stories about trains, let’s write about real trains, make up stories with trains, let’s take pictures of trains, take videos of them, ride them, count them, classify them. I think you get the picture. Son number two – let’s use Legos. Same deal. They are 15 and 13 and we are still using these interests to learn the higher concepts where possible. Son number one has two websites about trains, where he writes, blogs, includes photos and videos of trains for like minded folks. Son number two has a couple websites too where he writes about Legos and another interest he developed over time (computer graphics – first learned in relation to his interest in Legos.)”

I could go on and on about audience, but there are so many questions, so little time. Please leave your own suggestions in the comments! What’s most important to remember: many kids will be inspired to write (or dictate) if they have authentic audiences to write for, based on their own unique interests.

Carrie also wrote: “My four-year-old daughter periodically asks me to take dictation but I’d love to do even more of it with her.” Similarly, others have asked, “How often should I take dictation?”

I would say, as often as your kid wants to, and as often as you can! In my case, it’s more often an issue that I don’t get around to it often enough, not that my kids haven’t been interested. I think that once you get kids going, once they experience the pleasure of expressing themselves on the page, once they have real reasons to write–as described above–they will want to do it.

Know that you don’t need to take dictation every day, however. Sometimes we get to it once a week; other times we’ve gone a few weeks without me writing down Mr. T’s words. The effects are cumulative, however, and even occasional dictation sessions help kids. The goal, though, would be getting to it regularly, however “regularly” plays out in your family.

In terms of keeping it going, make sure you’re helping your child find different types of writing to dictate, to keep things fresh and exciting. Again, start with your child’s interests. You can play a big role here, making suggestions if needed; often I find that my kids take one of my suggestions and then riff on it, tweaking it into something that appeals to them. There are some ideas in the post They Don’t All Want to Tell a Story that may help with this. For inspiration, check out this comment from Kristin about how she took her daughter’s interest in drawing dresses and encouraged some fun catalogue writing.

Another friend said to me, “When I take dictation, I can’t keep up with what my son is saying!”

Writing as fast as they speak is impossible. You have to help your child slow down, so you can transcribe. I’ll often say, “Wait, I”m still on _______,” and I’ll narrate the words I’m writing, so T. knows when I’m ready to hear more. This may be frustrating for a child, but there are benefits. This same friend said, “When he has to wait for me, he sometimes changes what he wants to say, and makes it better.” Yes! Giving dictation forces a child to express himself slowly, which allows time to rethink each word. Professional writers know that the process of revision happens at every stage of the writing, not just after a draft is completed. Kids who dictate can learn this from the start.

Others have bemoaned the fact that a child who once enjoyed offering dictation no longer wants to do it.

We should all be so lucky! It’s a wonderful thing when a child promotes him or herself to personal scribe. The concern here, I imagine, is that dictation allows a child to be especially expressive–to dictate complicated lines, and lengthier works, and that self-writing will be lacking in comparison. That may be true, but you don’t want to hinder personal drive–that’s powerful stuff! Have faith that the mechanical skills will catch up, and the child will eventually be able to write with that same expressiveness. She’s done it before; she’ll do it again.

I’m going through this with Mr. T right now: he really wants to write himself, but sometimes he has so much to say that he’s willing to dictate it. Still, he isn’t completely pleased with this. His dogged solution is to take the dictated piece and erase my writing word by word, and replace my writing with his own. His dedication floors me, but this is what he wants to do. 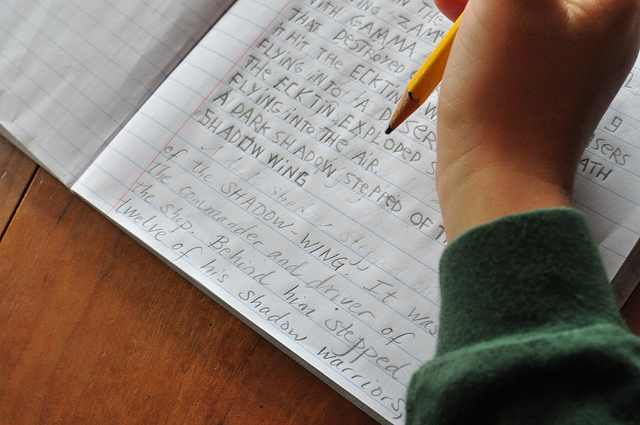 Just help your child know that your offer to take dictation is always there. I found that my older two gravitated back to dictation through the years, especially when they had difficult projects to write, for classes or for submission somewhere. They often appreciated having me serve as scribe for them in their initial stages. I’ll write more about this in my next post, on helping older kids with dictation. 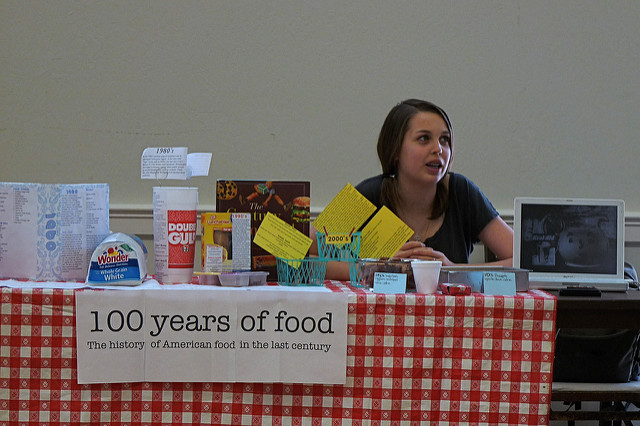 Whew! That was a ramble-and-a-half! Hope it helps. Keep those questions coming. I’ll do my best to respond with possibilities to consider.