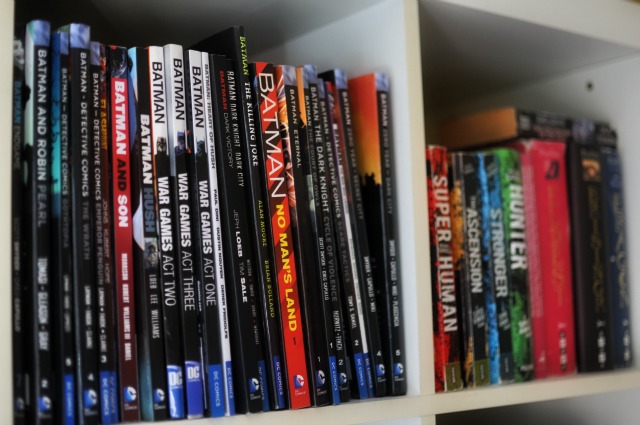 This is what my 14-year-old says, just before he breaks my heart.

But what he’s saying isn’t exactly accurate. For one, he’s saying it as a response to me bugging him about why he doesn’t read more. Which irritates him, and makes him want irritate me right back. And he knows just how to do it.

Two, this isn’t accurate because I know how much this kid actually does read. He reads comics like a superhero, as you know. He knows storylines back to their origins in the 1930s—and also how the history of the time factored into those storylines. Do not get him going on all the Batman reboots. (Yes, I have been schooled on the definition of the word reboot. I also know that there are multiple Batmans. (Batmen?) And multiple Robins to go with. One Robin was one Batman’s son; another became Batman himself. Makes my head spin.) My kid has complex and fervent opinions on all this, and can detail the superiority of one reboot over another with the eloquence and evidence of a literary critic.

I’ve come to appreciate all he’s learned from comics: story and character, culture and history.

He also reads on the Internet constantly. He follows Reddit threads on everything from League of Legends to astronomy. The other day he followed a Reddit link to a scholarly article—which he read—about that collision of two black holes that apparently bent space-time and proved one of Einstein’s theories, which had been recorded for the first time by scientists. (And then he tried to explain it all to his dim mother, beginning with the definition of space-time.) Then he went running to our homeschool Park Day hollering to all his friends, “Space-time has been bent! Space-time has been bent!”

Last Friday night, as we washed dishes after dinner, he explained the history of terrorism to me, using a globe to aid my 50-year-old mind. He wasn’t just parroting an article, but offering a multi-layered analysis, gleaned from long-running online reading.

Yet still his mother worries.

I read all the time.

But he doesn’t read books like I wish he did. Like his siblings did for all their childhoods. His brother taught himself to read by looking at books. He fell asleep on Richard Scarry’s books like they were pillows and kept going from there. Once, when I was sick, he read one of the 800-page Harry Potter books in a day and a half. His sister was the same. She’s a more auditory learner and cut her teeth on audiobooks, but once she had the reading thing down, our weekly trips to the library weren’t enough for her. She inhaled books like unsupervised packages of Oreos.

T has never enjoyed traditional novels. Well, that’s not true either. I’ve been reading to him all his life—novels once he reached a certain age. And we’ve almost always had an audiobook going in the car—another novel. T has loved many of those books—remember all the conversations fueled by A Series of Unfortunate Events? On our RV trip in October, we listened to Ready Player One, which made the final day’s drive from Salt Lake City to Oakland endurable.

Still, T has never been one to check out stacks of chapter books at the library. Instead, he always raced towards the long shelves of comics and graphic novels. (Back when his 23-year-old brother was a kid, the library had Tintins and Asterixes and not much more.) He also grabbed up that splashy nonfiction so popular in the children’s section these days: all those National Geographic Kids’ almanacs! Books with titles like 5,000 Awesome Facts and Weird But True!

How can straightforward black text on a white page compete with all that flash?

Chapter books are too linear.

Which I suppose makes sense when you’re used to leaping through images and graphics, back and forth at your whim.

Books aren’t the best way to tell a story.

Because this is part of the conundrum too. T is almost ten years younger than his brother, and six years younger than his sister. It’s interesting to compare the two boys in particular, since their minds seem to work in similar ways, yet the Internet and our access to it changed markedly in the ten years between them. When H was a kid, we had simple computer games like Zoombinis and Lego Harry Potter. But the Internet itself wasn’t terribly enticing to a kid back then. YouTube didn’t start picking up until H was a young teenager—but by then he’d established his reading habits. Plus, there weren’t smart phones to distract him from his books; he had to go downstairs and sit at a computer to get information.

T, in comparison, can’t remember life without YouTube. Or a kitchen without my laptop, for that matter. From the time he was five or so, he’s run to the computer to answer any question—because there was always a computer there. Or, for the last few years, a smart phone. And he has one of those himself. He’s never had to wonder for long.

We’ve put limits on Internet access, yes. And I’m not writing this as a diatribe against the Internet. (Internet-bashing on the Internet—good thinking!) But I do wonder what all this instant access to information and entertainment does to a kid’s desire to simply read a book.

This is a challenge for all of us these days—not just kids. I recently read an interesting essay by Andrew Bomback, “My Year of Internet-Assisted Reading,” about how the author can’t help but click away from what he’s reading to see something that’s been referenced. To watch it himself on YouTube. It’s a thoughtful piece on the advantages and pitfalls this sort of access has on reading.

The essay refers to another essay, this one by Tim Parks in the New York Review of Books. In “The Struggle” Parks writes about how our attention spans are making it harder and harder to concentrate on the complex paragraphs and even sentences of the books of yore. (When I try to follow the paragraph-long line from Dickens that Parks includes as proof, I’m distracted by an Anthropologie ad flashing to the right, featuring items I must have clicked on at on the site previously. Vegan leather moto pants! The Deletta Lace-up Tee! I very nearly click on those vegan leather moto pants before realizing the ridiculous irony of what I’m doing, and get back to Dickens’ over-jobbed jobberies.)

Parks suggests that our Internet-addled minds are changing the very style of writing. Hence, short paragraphs that a reader can grasp. Like this one.

If adults who grew up without the Internet are struggling with changing attention spans and click-ready fingers, how does this bode for our kids?

Movies and TV shows are such a better format for conveying stories.

Yes, I get it. Movies and comics, television and YouTube—how can a story told in mere words compare?

And I suppose I am. I want my kid to read books. I want him to fall asleep with a book dropped at the side of his bed. I want him to have that drive to visit a bookstore before heading out on vacation, to pick up a thick novel or work of nonfiction.

I don’t worry that he won’t be an informed, intellectual person; he’s already proven that he is. He loves to talk deeply about ideas, to critique films he’s seen, books we’ve read together.

He has a keen sense of storytelling. In our homeschoolers’ writer’s workshop he invariably writes fiction, ironically enough—and he’s good at it. He has an enviable vocabulary. He can interpret information via text like an academic.

So why do I worry? What is he missing? Does it matter so much that he doesn’t want to sit down and read a novel?

Well, I’m a writer, so yes. There is something unique, I think, about following a story that requires prolonged attention, writing that has been crafted. It doesn’t have to be a novel, I suppose. I’m a fan of memoir and essay collections myself—but still, those forms share the qualities of length and craft.

Lulu still reads books. Less mid-semester as a college student, but whenever she has a break from school, her first stop is The Strand, and that makes me happy.

I’d feared that maybe H didn’t read so much anymore, but when I text him to ask, he surprises me. He’s just finishing Junot Diaz’ The Brief Wondrous Life of Oscar Wao, a Christmas gift from his sister (Yes! Literature love!) and he proclaims it incredible. “I’m trying to make an effort to read a lot more,” he texts back. “Much better to read when falling asleep than watch videos.”

I pump my elbow to my side in silent victory. When I text that I worry about his brother, he responds, “Haha, yeah, he’s a child of the future.”

And that’s it, precisely. My concerns lined up in a single sentence.

So I do what I can to influence this child of the future. I check out the audio version of Armada, Ernest Cline’s newest book, to listen to together. I buy him the sequel to Michael Carroll’s Super Human books—a rare series that T has read on his own, since their storylines are like comics, novelized. I work harder to make sure his phone is put away at 10:00 each night. I consider reestablishing reading time during our remaining homeschooling days.

And I wish my love of books on him, silently and insistently, as only a mother can.