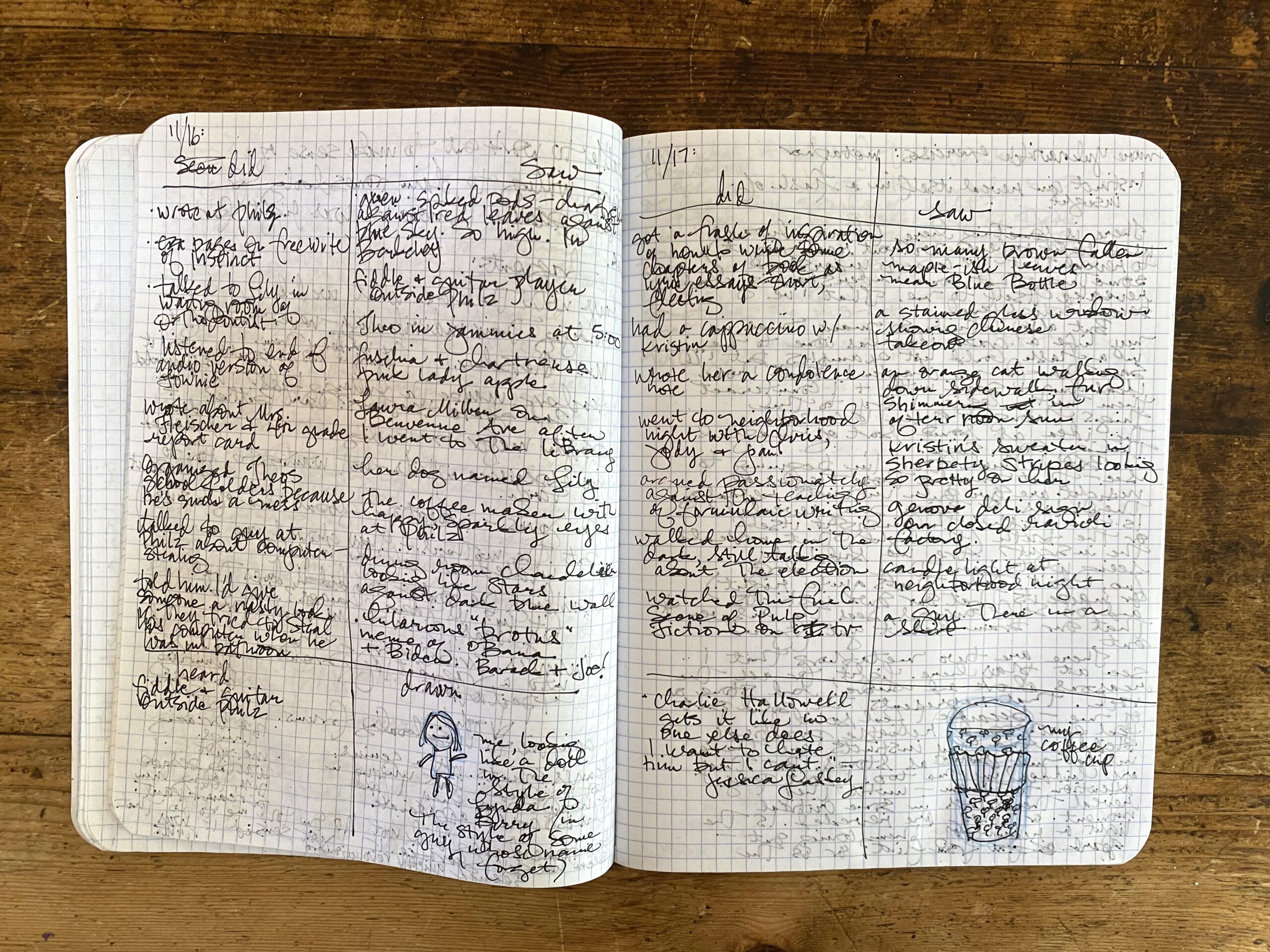 A month later, and apparently I am still obsessed with hands. Lynda Barry calls them “the original digital device.”

I am also newly obsessed with Lynda Barry.

I encourage you to try it. If only to soak up Barry’s goofy enthusiasm. If only to see her iconic self, in braids and glasses, red bandana and red lipstick, dancing during the class break, half-way through. To see her dancing while talking on one of those Fisher-Price telephones with eyeballs. While playing a stuffed tiger tail like a flute.

Did I draw the monster she told me to draw? Yes, I did. 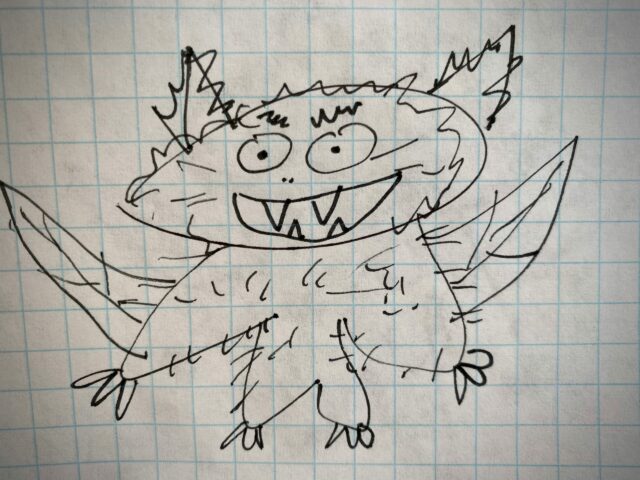 (I am not going to worry about whether my monster is good or whether it sucks because Barry has trained me not to do that.)

I’ve been doing a version of Barry’s 4-minute diary since buying her book Syllabus in 2016. (I started my first diary four days before the election. The first thing I “did” on 11/8/16 was: voted for a WOMAN president! I glued in my ballot stub and my I voted sticker!!! The day ends in a lot of crying.)

I was consistently sporadic about keeping my 4-minute diary for the next few years. I’d record for a few days in a row, and then I’d miss a week. Or two. Everything changed this January with my new morning routine. I rarely miss a day. I’m racing through the composition books.

But I have to admit something: I stopped doing the drawing part of the diary after a few months. I didn’t want to take the time. I don’t think of myself as someone who draws.

Instead, I filled that square by recalling a moment of grace I’d observed that day. A lovely habit. But not a drawing. Not an image.

I’ve learned so much about images from Lynda Barry. In 2018, I wrote about going on my first writing retreat with my mentor Kate Moses, and becoming interested in the power of images in writing.

On retreats, Kate brings baskets of books to inspire us–open access to the bookshelves of a truly ardent reader: it’s amazing. There, I discovered Barry’s What It Is, a stunner of a book, the story of Barry becoming an artist, told via mesmerizing pages of comic and collage, all the words written by hand.

I stayed up late every night of that retreat, in my single bed in my tiny room in upstate New York, small circle of lamplight, reading What It Is. In its pages, Barry reveals what she’s learned about the power of the image, “the pull-toy that pulls you from one place to another.” Barry’s ideas echoed just what Kate had been discussing with us during the day.

Ideas are fine and dandy, but to truly latch on, readers need something tangible. It’s image that captures a reader, connects with something deep inside her brain, brings writing to life.

By image I don’t mean a visual representation, I mean something that is more like a ghost than a picture; something which feels somehow alive, has no fixed meaning and is contained and transported by something that is not alive–a book, a song, a painting–anything we call an “art form.” Images are also contained by certain objects that young children become deeply attached to, like a certain blanket a certain child can’t stand to be without…The blanket has come to contain something the child interacts with as if it were alive. How did this “it” come to be located in the blanket? How was it put there?

She calls it the image world.

After taking the drawing workshop, I’ve been gorging on every recorded Lynda Barry interview I can find. (A thing I do: get obsessed with some writer, listen to all their interviews, take notes, feel like I’ve taken a master class for free. Last month it was George Saunders; I wonder who’s next?)

Here’s an excellent older interview with Barry. And here’s a newer one, out with the release of her latest book Making Comics.

In all Barry’s interviews she talks about kids, and she writes about them a lot in Making Comics. How they inspire her; how she learns from them. How she watches how they play, and especially, how they draw. 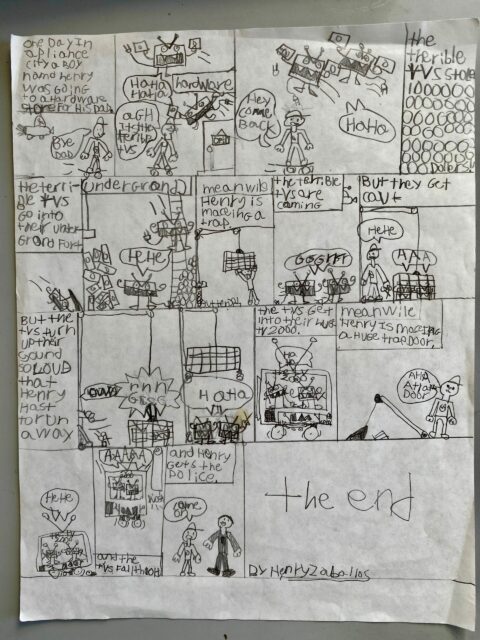 L–dancer, performer–used to draw incredibly expressive pictures of dancers and guitar players (like her daddy.) 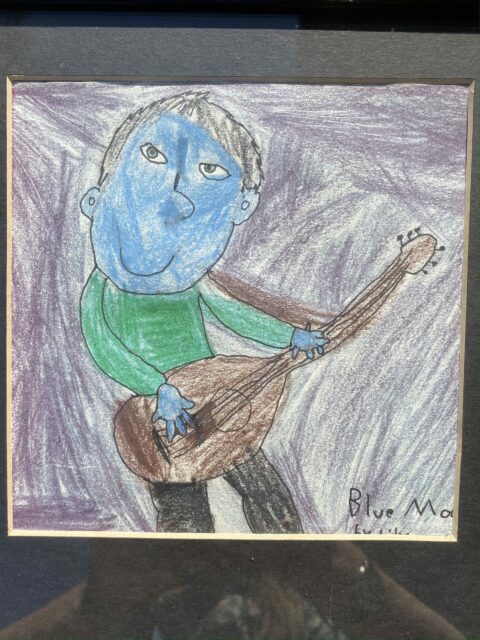 And T. That kid drew constantly. For years, practically every flat surface downstairs in our house had drawings on it. The archives here are full of his works–in–progress. He drew exactly as Barry describes: as if he was inside the place he was drawing. 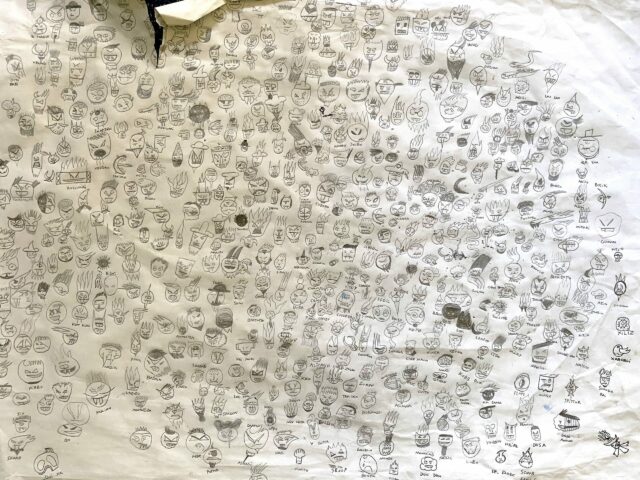 It’s hard to visualize the size of this thing. It’s a poster-sized page with I-have-no-idea how many characters. I’ve always wanted to have a Spoonflower fabric made from it.

I wrote about just what Barry describes way back in 2008, watching him. 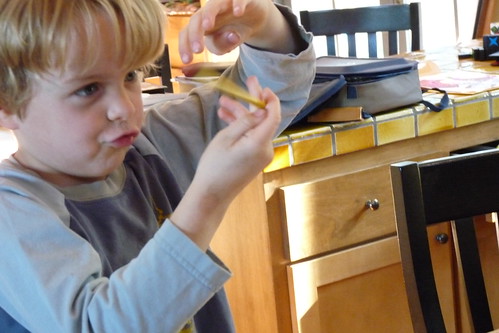 What It Is leads up to a section called the “Activity Book,” with exercises aimed at helping you get inside an image from your past.

If you haven’t tried it, you have no idea how powerful this can be.

Barry has you choose a memory–a car from your childhood, a friend’s mother, any memory of your choice–and you do a timed free-write with various prompts: what’s to your right? why are you there? is there anyone else in this image? And so on.

Every single time I do this, I recall details (images!) from my past that I’d never have remembered otherwise. The cardboard house that H and I made during our first week of homeschooling. The closing night circle with Drama Club when I was a high school freshman. The kids chasing Incredibles super-balls alongside the Urmea River in San Sebastian, Spain.

Now, whenever I begin a new chapter, I start with Lynda Barry’s image-finding exercise. 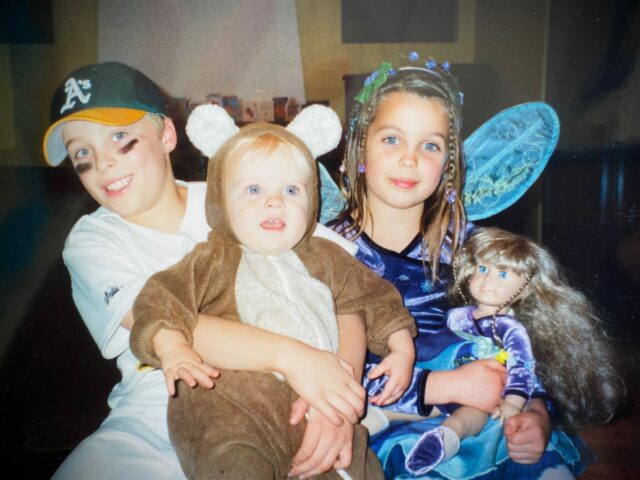 Drafting my memoir, I’ve been combing through old journals. This week, revising a chapter set in 2003, when we were in the thick of homeschooling with a 10-year-old and a 6-year-old and oh, you know, the baby we’d thrown into the mix, I came across this line in a journal from that year: I want to write more. Even if it means just taking notes.

I was hard on myself back then. I expected a lot of myself. Two older kids with busy homeschooling social lives, a 10-month-old baby, yet I wondered why I didn’t write in my journal more often, why I couldn’t finish an essay.

Mothers can put so much pressure on themselves. Maybe I can just keep a notebook and try to jot things down? It was all so hard.

I wish I’d known about Lynda Barry’s 4-minute diary back then. Wish Syllabus had existed.

These days I’m in the thick of revision. Revising, in part, means going back through something I’ve written and adding life. Replacing the pedestrian description with some quirky, Lorrie Moore-ish detail.

After taking the drawing workshop, I dug back into Syllabus, remembered that it isn’t so much an instruction manual for drawing or keeping a diary–it’s a independent study course on paying attention. A means of keeping track of things in your day that you might otherwise not notice at all.

There’s a list on page 64 of things her students did, as listed in their diaries, including: Spilled Chinese food in my purse. Based my purchase at a store on the kid in line in front of me. Felt weird again in Trader Joe’s. And some things her students saw: Another soggy sandwich. Boy in toga leaving girls’ bathroom. A group of people trying to look on the bright side.

I thought about how my own 4-minute diary has morphed toward pedestrian descriptions of everything I do in a day. Made aloo gobi. Went to the chiropractor. (All the more pedestrian when the doings happen at home during never-ending groundhog days.)

If I want more quirky, Lorrie Moore-ish details in my writing, I should probably try harder to spot them in my life.

T never draws any more. This makes me sad. I loved his endless stream of characters so much.

The pshoo-pshoo pencil boy is, unbelievably, now 19. Since he’s in pandemic-college in this very house, last night at dinner I asked him about his drawing, and why he stopped.

“It was always about narrative,” he said, sitting in the same spot where he once looked deeply into the eyes of a pencil.  “I was drawing to tell a story.”

He’s still telling stories. Last quarter, his screenwriting professor really dug his screenplay, a (quirky!) twist on a murder mystery on a train.

“So the drawings were a sort of portal into your stories?” I asked.

“Yeah,” he said with a jut of his now impressively superhero-ish chin.

So much of Barry’s work is based on opening ourselves to intuition. Since working with Kate, I’ve come to understand the power of intuition in my writing. My writing practice has become more associative, more freestyle.

More analog. (Some post soon I’ll tell you about the index cards.)

Barry is a big believer in hands.

The hand-brain connection across disciplines, fields, and age groups has intrigued her for years. The hand knows what it’s doing before the person does, she says, noting that insight happens in the gap between the hand doing its own thing and the mind catching on.

Which brings me back to my own drawings. I’m excited about bringing back the drawing square on my 4-minute diary pages. Excited about digging into the exercises in Drawing Comics. Not because I want to become better at drawing–because Barry has convinced me that drawing is a portal to a place I wouldn’t otherwise access. Because the practice will make me a better writer.

And because–I get this now–it’s just dang fun. I already know what I’m drawing today: T standing at the top of the stairs this morning, shirtless and in shorts, frozen, his arms splayed to the sides a little, like an action figure, asserting his infinite powers down on me at the bottom of the stairs, his little mama. Lynda Barry would have loved it. 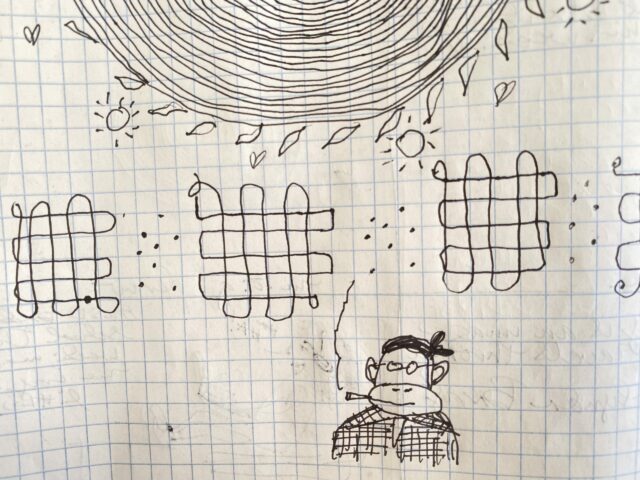 –I know I’m a broken (analog) record when it comes to Austin Kleon, but you’ve got to listen to this interview. It’s like he somehow got in my brain and talked about everything that fascinates me: Artists with backgrounds in religion! Homeschooling! How schools could be better! Libraries! Quilting! Using creativity to respond to disgust with the world! Feminism as an alternate model for that world! Diaries! Walking! And this: “I’ve always felt that I was more of a librarian for my kids.” (As opposed to a teacher. <3)

–two conversations between four writers I adore: Josh Mohr and Lidia Yuknavitch on the release of Mohr’s Model Citizen. ( I love his memoir Sirens so much; this is an expanded version of that book.) And I could listen to Jenny Offill and Emily St. John Mandel talk forever. (Did you know that Mandel homeschooled as a kid?!)

–And because, what the heck, I’m on a Taylor Swift streak here: her new single is my latest ridiculous play-the-same-song-on-repeat-while-I-work thing. My husband knows: I’m a sucker for a jangly guitar.

–And hey, welcome to 2021 if this is your first visit to the blog since I time-traveled it forward from 2011 by freshening things up and making it readable on a phone. (But remember: your hands are the original digital device!) If you’re a homeschooler, check out my homeschooling page, now organized by handy-dandy cards…