a few rules for homeschooling and life, the marvel edition 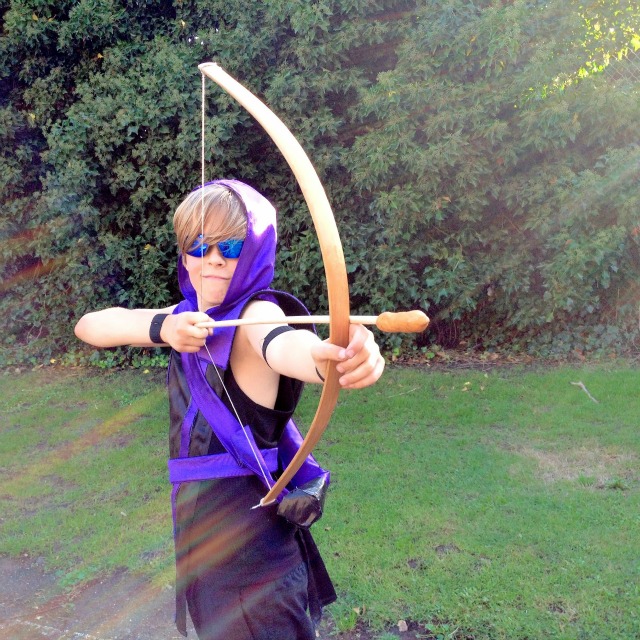 Let kids pursue their interests, even if they seem trivial. Especially if they seem trivial. This could be a subtitle for practically every post I write, so there’s nothing revelatory here. Still, it’s a handy rule, worth shaping a lifestyle around—even if it means that a kid wants to study Avengers comics for months on end. (Remember Mr. T’s graph of Avengers characters and the fun it led to? Well, T has only fallen deeper down that Marvel hole…)

Help kids funnel their interests into projects that intrigue them, even if they’re quirky. Especially if they’re quirky. T was all revved up with his Avengers fascination, after watching the new season of The Avengers: Earth’s Mightiest Heroes. He tried to dream up a new project, based on the characters on the show. We were talking about ways of displaying information about the characters, and somehow the Periodic Table of the Elements came up. T has been has been fascinated with the Periodic Table since discovering Theodore Gray’s The Elements years ago. Honestly, I think there’s some connection between T’s interest in comic characters, Pokemon and then Magic cards, video games and the Periodic Table. All are based on sorting and comparing people, creatures or elements by their strengths and powers. It all seems rooted in some way of classifying the world that I do not fully understand. Anyway, T leapt around the house at the idea of making a Periodic Table of Marvel, and so he set to it. (Let’s not yet tell T that he is not the first to come up with such an idea. After he began his project, I discovered that others have made similar tables. Witness this and this. Clearly this sorting-the-world-by-power approach to life is not unique, and seems particularly thriving in the geek–and I mean that in the fondest way–world. After T completes his table, I’ll show him the others.) 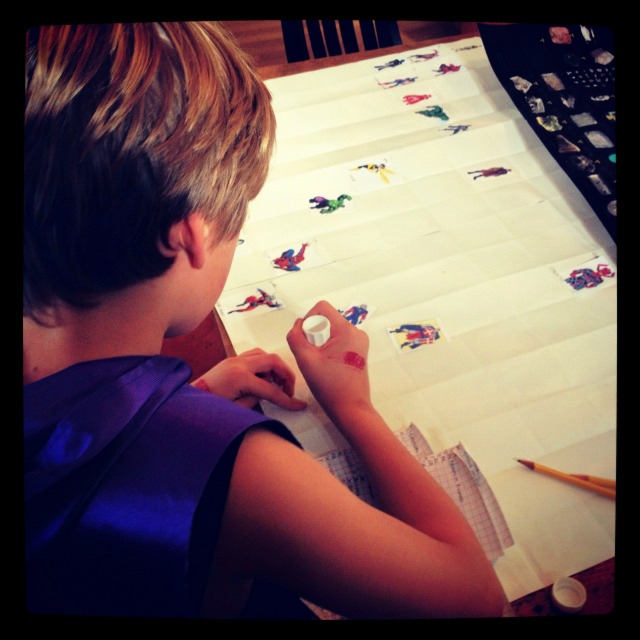 Teach kids how to research. Much as I encourage T to look beyond Wikipedia, Wikipedia often has the goods. It did not take T long to discover this alphabetical lists of Marvel characters. Can you believe there are so many? T’s goal is to find a character for each symbol on the Periodic Table. Gallactus is gallium (Ga), Namor is sodium (Na), Ant Man is americium (Am). Iron Man, is of course, Iron, Thor is Thorium and Cobalt Man is Cobalt. 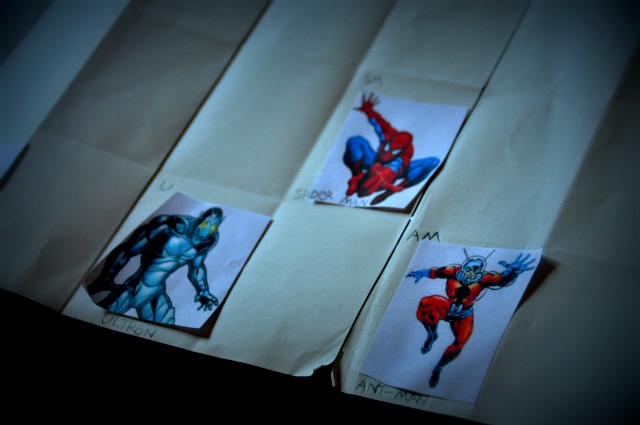 You might also try to teach kids how not to get sucked in by their research. A tricky notion if you are an eleven-year-old researching comic book characters. Whenever T tried to find a character to go with a certain element, he got lost in reading entire histories of all the characters who could represent that element. I reminded him a few times to get back to his list–but all that research had its own value, as you’ll see below.

Seek out fantastic resources. T fell hard for this Marvel characters guide when I bought it for him this summer, before a camping trip. It’s been studied so hard that pages are falling out.

We wondered about other books on Marvel characters and history. I showed T how to search for these with our library’s online catalogue. We quickly discovered Marvel Comics: The Untold Story just a few days before its release, and put ourselves in the library queue. This is an adult nonfiction book; I’ll be skimming it to make sure it’s right for T. Still, you don’t want to underestimate your kid’s reading level when it comes to topics of interest. I was amazed when T worked through Super Mario: How Nintendo Conquered America, another adult nonfiction book, this summer.

Guess what showed up on T’s eleventh birthday from his big brother? 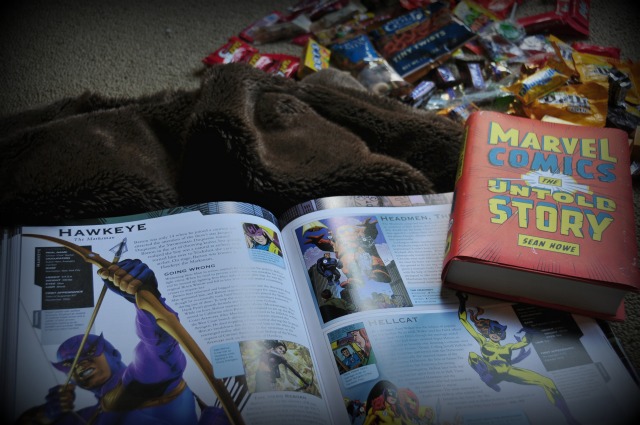 We also discovered the Marvel Encyclopedia–a much more comprehensive character guide–online, but couldn’t find it, even through inter-library loan. Uncle Pat to the rescue. T hooted when he opened the box on his birthday. The hefty book was gift from my brother, who didn’t know that T was researching Marvel as part of his homeschooling, or that we were trying to get our hands on this particular book; he just knew his nephew was a Marvel fan. Takes one to know one. My brother spent virtually every allowance of his childhood on Spider Man comics. When his wife suggested a DC book for T’s birthday, my brother lashed out. Marvel fans do not abide DC.

Don’t underestimate the learning that might happen. I wasn’t sure about the depth of T’s Periodic Table as a project. He’s basically searching for characters that fit the letters on the Periodic Table; there isn’t much analysis involved. Still, the act of researching those characters has led to all sorts of reading, cross-referencing and considering how the characters have evolved over time. One day T explained to me how Captain America was written to raise morale during WWII. Another day he told about the origins of the Black Panther, the first African-American superhero, created in 1966. So yes, he’s simply researching comic book heroes–but he’s delving into history at the same time.

Incorporate costumes whenever possible. It helps if Halloween happens to be approaching, and you want to be Wolverine or Thor. (Superheroes, always superheroes!) Or perhaps you have a history fair or the like coming up: you can, say, model your duct tape hoplite costume there.

Basically, if you have a costume, you can become the character or person you are reading about, rather than just reading about that character. 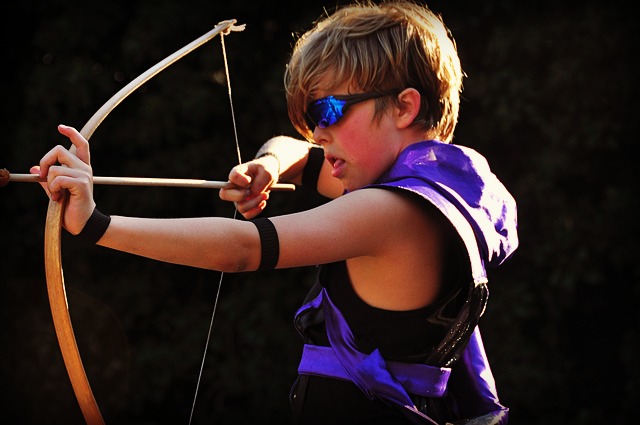 This Halloween Mr. T wanted to be Hawkeye (and no, to those of you of my generation or older, I am not talking about the character from M*A*S*H.) Hawkeye has always been one of T’s favorite Avengers–although T is full of disdain for the Hawkeye in the recent Avengers movie. What a disappointment! What a bore! Plus, the movie Hawkeye looks cool; the original Hawkeye is a study in superhero dorkdom in his purple suit with loincloth thingy. T wanted to look like that Hawkeye, in all his purple glory, and he instructed me with carefully researched comic art as I sewed him his suit. (We gave a grumbling nod to the movie Hawkeye by stealing his sunglasses instead of the traditional oversized eye mask, which T would have ripped off within 42 seconds of putting it on.)

Gives new meaning to the notion of digging into your research.

Have fun with your kids. Yep, that’s my alter ego: Super Mama! 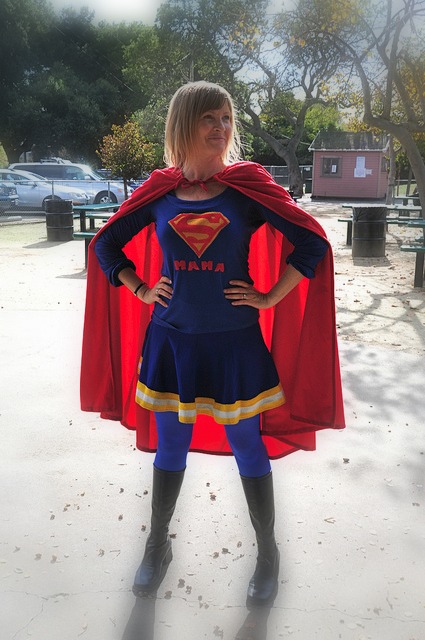 Faster than a speeding toddler, stronger than a sixteen-year-old trying to take the car keys, able to cook three pounds of kale in a single pan! It’s a robot, it’s a saint, it’s Super Mama!

(My apologies to Marvel fans for the DC allusion here. But I sewed up that red cape for T’s Thor costume last year, and I couldn’t see the point in starting from scratch this Halloween. Repurposing is one of Super Mama’s greatest superpowers.)

I doubt that Super Mama will make her way on to the Periodic Table though, not even in the Samarium (Sm) square. Oh well. Can’t say I didn’t try.

Do these rules play out in your family? How so?