become a writing mentor to your child, part 7: the power of positive feedback 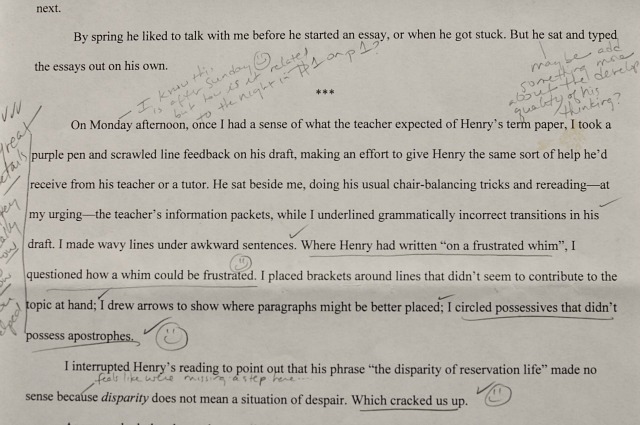 Feedback on one of my drafts from a writing friend. Note all of the smiley faces and “I like this” checks. I learned that I’d done something right in this paragraph.

All I ever meant to do was write a simple post on how a parent might offer writing feedback to their kids.

I’d written this post on the (unfortunately now defunct) Spilling Ink blog about how to offer feedback to a fellow writer, and I figured I’d adapt it for parents.

But how could I write about becoming a writing mentor without exploring the difference between a teacher and a mentor? And if I wanted to convince you that mentorship works, I had to write about how much kids learn without being taught. Then it seemed that we should examine what mentorship might look like. And if we were talking about writing mentorship, we couldn’t ignore spelling and grammar, because those are often the elephants in the room that get in the way of mentorship for parents. And of course we needed to address finding meaningful writing for kids, because if  kids don’t care about writing, there isn’t much to mentor in the first place.

Good news, though! I think I can tie things up in two posts (with no Disney princess tie-ins, even.)

So, next post, the promised tips for offering feedback. And today: some thoughts on why positive feedback is so important.

As parents, we know the value of encouraging our children. Admiring their drawings, thanking them when they remember to put their dishes in the dishwasher. When it comes to our kids’ writing, though, many of us find ourselves lapsing into the role of teacher, rather than encouraging parent. (Which is where I was going with that first teacher versus mentor post.) We may look at our kid’s writing and seize up at the sloppy handwriting, the spelling errors, the missing periods and capital letters. Our concerns about our child’s writing development may impair our ability to see much positive in their writing at all. How can we offer positive feedback when there is so much that needs to be fixed? (I know how this goes. I’ve been there too.)

I hope to convince you that turning your attention from what needs to be fixed, and focusing on the positive may be more powerful than you realize. I don’t mean this in a new-agey, touchy-feely, praise-your-kids-about-everything way. Simply put, I’ve discovered this: if you offer almost exclusively positive feedback on your child’s writing, your child will likely develop as a writer.

If you’ve read my book on writer’s workshops, you know my thoughts on positive feedback. I want to share a story, adapted from the book—with a few insertions to remind you that what works in a writer’s workshop works for parents and their own kids as well.

Years ago, I took a writing class at my local adult school, taught by a woman named Charlotte Cook. I think I paid sixty dollars for a ten-week course, and it may have been the best sixty dollars I’ve ever spent, because Charlotte was one of the finest writing teachers I’ve ever watched in action. Over the years I’ve taken a collection of much more expensive writing courses through university extension and the like, but no instructor ever pulled off the magic that Charlotte did in a high school Civics classroom each Wednesday night. She had a gift for pinpointing the strengths in any writer’s work, no matter how unpracticed those writers were. The nutty psychotherapist whose mysteries strayed aimlessly learned that she had an ear for dialogue; the quiet young mother who timidly shared her personal essays discovered that her lines had the lilt of poetry. Charlotte helped me understand for the first time that I had a knack for choosing details, which has kept me searching for the right ones ever since. Sometimes I’d listen to a classmate’s contribution for the week and I’d think what will Charlotte possibly find good in that? And then Charlotte would find something. She didn’t dwell on what our worked lacked, the way teachers in my other courses seemed to do; instead, she kept digging into the garage sale heaps of our drafts and drawing out treasures, with a big grin on her face. Sometimes the treasures were small, no bigger than napkin rings, but they were enough to keep us writing, and polishing, until we slowly began to recognize, on our own, where our words had worth.

As a facilitator of writer’s workshops—and as a parent—I’ve always tried to emulate Charlotte’s treasure-digging.

Positive feedback gives a writer more than just confidence; it gives us a sense of how to proceed. If we know what we’re doing well, we’re likely to keep doing it. Our strengths as writers are not always obvious from where we sit behind the pen or the keyboard, but having them proclaimed and explained in a workshop setting—or by a parent—begins begins to establish and solidify them. They become like handholds on a climbing wall: once we have a solid footing in one area, we can creep to that next spot, just a little farther up, and take a new risk in our writing. Positive feedback offers a map of where to begin, and suggestions for where to go. Too much critical feedback, on the other hand, simply gives a map of spots to avoid, labeled with skulls and crossbones. It’s hard to get anywhere when you’re just trying to keep out of trouble.

Many of us make it to adulthood with no sense of our own strengths as writers—we may not recognize that we write with clarity, or sensitivity, or that we’ve inherited our crazy cowboy grandfathers’ knack for spinning a gripping tale. Yet in a workshop environment—or with the feedback of a caring parent—kids gain a sense of their strengths from the start.

Why positive feedback is more valuable than parents may realize:

Kids who feel good about their writing are likely to want to continue writing, and this internal motivation is likely to be the most powerful factor in their development as writers. In his book, Several Short Sentences About Writing, which you know I love, August Klinkenborg writes,

Kids need to learn that feeling of recognizing what they’re doing well on their own. Our positive feedback can get them started. Their recognition of their own successes will be that “guide and…incentive to making more good sentences.” Kids who feel discouraged and overwhelmed with writing, on the other hand, are not likely to want to write. They won’t have the power of internal motivation to keep them writing. The drive to make more good sentences is the simple requirement for improving as a writer.

We’ll talk more about how to give positive feedback in the last installment of the series. It can be harder than it sounds to stick with the positive, I know. Basically, note what your kids are doing well in their writing and tell them why it appeals to you. Be like Charlotte and emerge from reading their work with a big grin and some thoughts about what you admire. (Even if the treasures are tiny as napkin rings.)

Which is not to say that kids don’t ever need constructive feedback. More on that next time too. But when in doubt, err on the positive side. Keep guiding your kids to the good sentences they’ve already written.

You can read all posts in this series here.