a history of history fairs 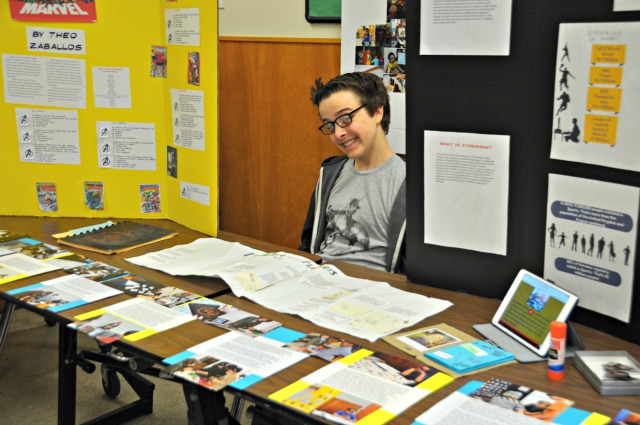 A few weeks back I organized A Trip through Time for my homeschooling support group. The tenth annual history fair I’ve organized, and the last. I’m feeling a little sappy in the face of all that history.

I have my own history of convincing my homeschooling group to adopt wild ideas. (Let’s form a Destination Imagination team! Let’s start a writer’s workshop! Let’s live like gold miners for three days! ) The history fair was a good one, I think. It’s been going strong ever since, and I wrangled some other parents into carrying on the tradition next year. (I’m also awed and delighted that my post on how to host a fair has been pinned more than 3,000 times! Folks have written to tell me about the fairs they’ve organized–we’re spawning history fairs across the globe here on the Wonder Farm!)

When I first suggested we host a fair, it was for my two older kids and their friends. H made his duomo model that year, and Lulu researched the Renaissance. T was just five, and almost as an afterthought he decided to make a display about knights. Adorable, I have to say, but I’ll let him tell you about it. Because that’s what he did for this year’s Trip through Time. He’d participated in all nine previous trips, and so this year he decided to go meta as he’s prone to do, and display on A History of History Fairs.

He laid out samples of his past work with photos of each year, and wrote up a summary for the viewer. Which is where all the fun is, because T never does anything in a straightforward way. Never a dull moment with this kid. See for yourself. 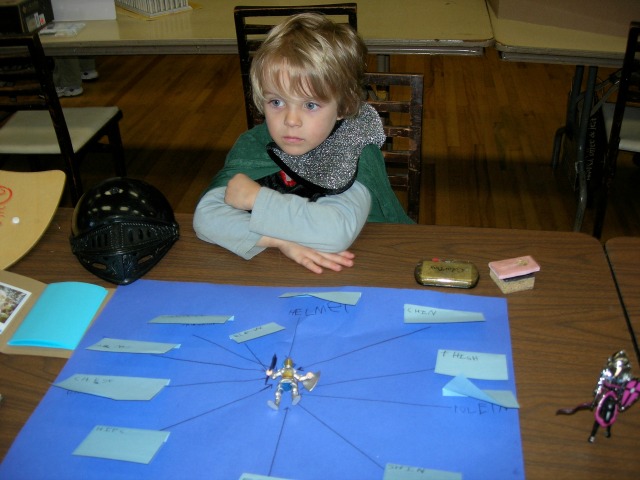 In 2007 I had reached the age of five and partook in my first history fair, an assembly to share one’s intellectual findings. Needless to say, it was my project that dispensed the most wisdom. Note how enthralled I appear, sitting there in my noble attire, sporting a spiffy spaulder (which would fail to protect me from the merest of blows), green robes clad across my back. I concocted a trial to test the steel of fledgling heroes by having them guess the pieces of armor that a knight would use to protect oneself. I came home disappointed at my lack of worthy candidates to fill the role of my squire. However, a highlight of the day was the congregation with the leader of the Viking tribes from the north. I personally find them to be a tad barbaric, so it was a miracle that no blood was shed that day. 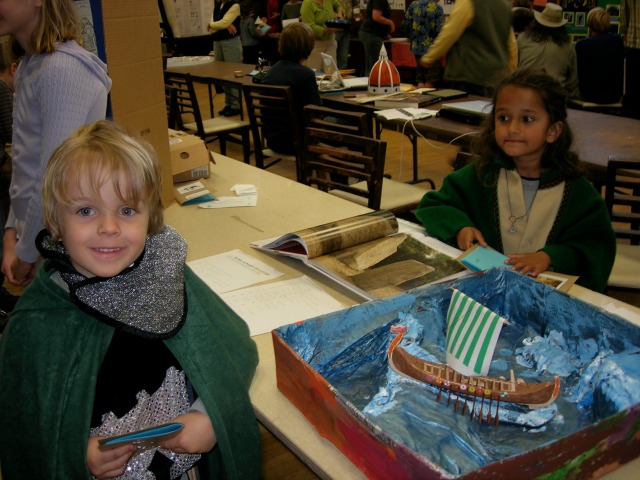 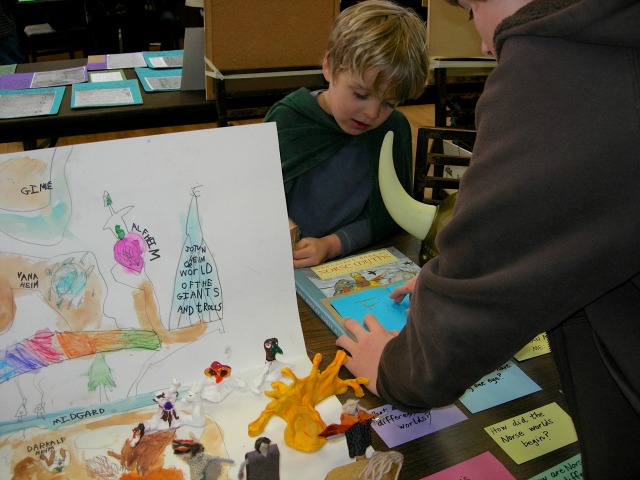 In 2008 I defected and joined the Viking horde. I replaced their prior leader and returned to the history fair in hopes of spreading the knowledge of my newfound peoples. Sporting my cape of green once more (which definitely was not because I couldn’t find a new ensemble), I taught unworthy peasants of the might of Thor, the wisdom of Odin, the bravery of Tyr, and the marks of the rest of the Norse pantheon. I also provided a map of the nine realms; its majesty duped low enough to be fathomed by the meager minds that attended my conference. 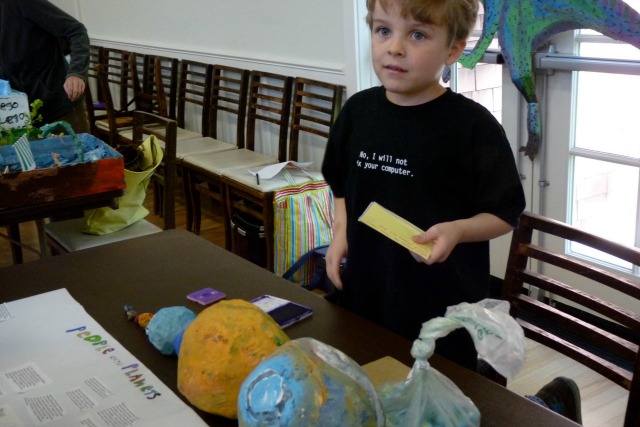 In 2009 I departed from the Viking hordes and set my sights higher than ever. I went cosmic. I built planets out of sheer creativity, force of will and a bit of Paper Mache. I shared the stories and legends of other great scientists, philosophers and brilliant minds that helped explore and understand the fundaments of the universe that command us and the celestial bodies that lie beyond the world. And, because I knew my wisdom and intellectual findings might be too erudite for those who sought my knowledge, I bought some of those chocolate planet things from Whole Foods. 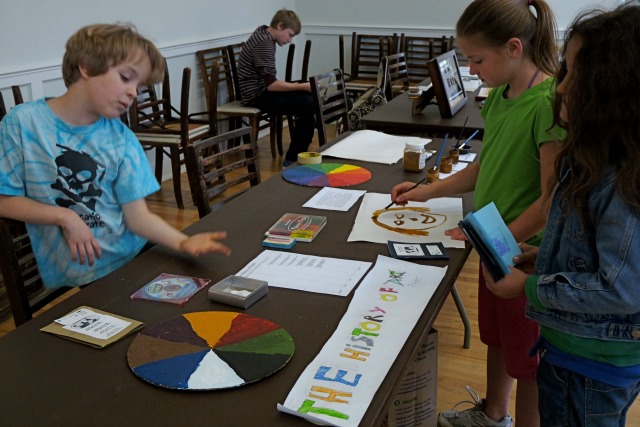 Knights. Vikings. Space. In 2010 what was the next logical step? Paint. Yes, paint. (What could be the possible explanation for my about-face from grandiose epiphanies to a quotidian topic like paint? I had this really bomb art videogame about penguins and polar bears.) You know what they say, paint makes the world go round. Okay, no it doesn’t, but it makes art a lot less white.

I tasked those that besought my wisdom with discovering the ingredients that formed colors in ages past.

How do you make purple, the most opulent and royal of all colors? Snails. Guess what materials make brown? Fecal excrement, vineger [sic] and lead. Truly awe-inspiring.

My pupils were disappointed with this year’s lack of chocolate goods. 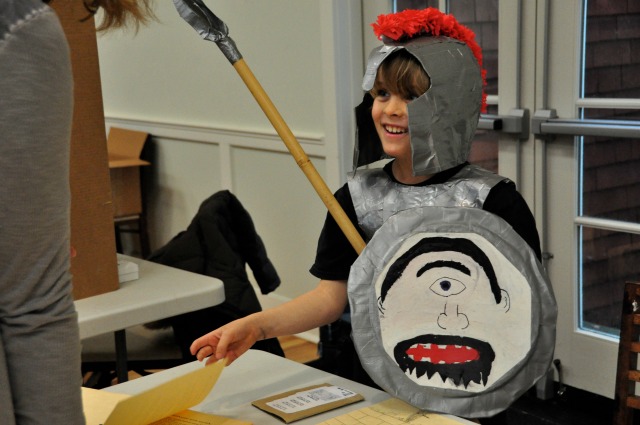 In 2011 I donned sword and shield once more (actually it was a Dory and Aspis, typical armaments for a greek hoplite) and went back in time to Homer’s second most famous book and the world’s most famous battle that only might have happened.

The battle for Troy. And believe me, I Trojan Horse’d this history fair (is that a saying?). Greece and Troy were gearing up for war, and such heroes as Ajax, Achilles and Odysseus weren’t gonna miss it, and neither was I, clad in infantry weapons and duct tape armor. I crafted a mural of epic proportions that told the tragic tale of Troy’s fall, and made a codex to impart the knowledge of the history and mythology of Ancient Greece that I had amassed. Sphinxes, Manticores, Medusa, Scylla, Charybdis, Pegasus, Chimaera, Colossi, Cyclopes, Sirens, Harpies, Minotaur, Hydra, Typhon, Giants, Titans, Cerberus, Dragons, Daemons, Centaurs, Satyrs, Dryads, Naiads, Phoenixes and Echidna. All were included in my omnibus, even if I spelled all of their names wrong (sorry!) 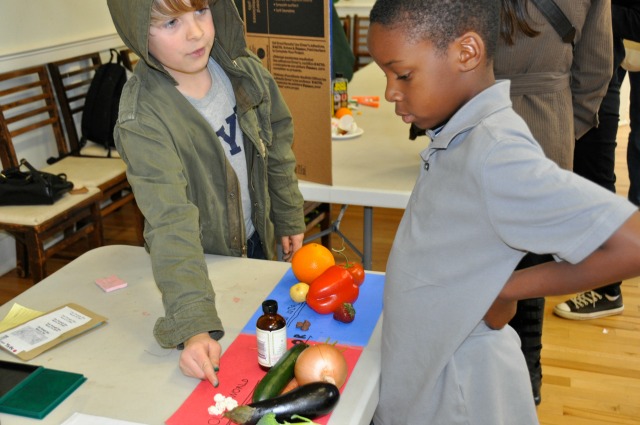 In 2012 I had a whole new world to explore. Columbus. Cook. Drake. De Gama. Cortes. Vespucci. I would be remembered with the greats. I concocted a brilliant slideshow with ground breaking, state of the art CGI and SFX and tasked my neophytes with separating old world fruits and vegetables from new. Did you know potatoes are from Peru? I sure did.

Once my supply of popcorn I had attained to appease my abecedarians was depleted, I saw a rapid decrease in visitors to my table. Today’s greatest philosophers, quantum physicists and mathematicians are still working to discover if the aforementioned decrease in available popcorn was a possible causality for my lack of viewership. Some say we may never know.

Anyway, back into the task at hand. With the power of science and unreliable information at my fingertips I proved the flatlanders wrong in proving that the earth was round (it’s actually an oval). But soon the understanding of our planet and the histories of our people would give way to something much more important… 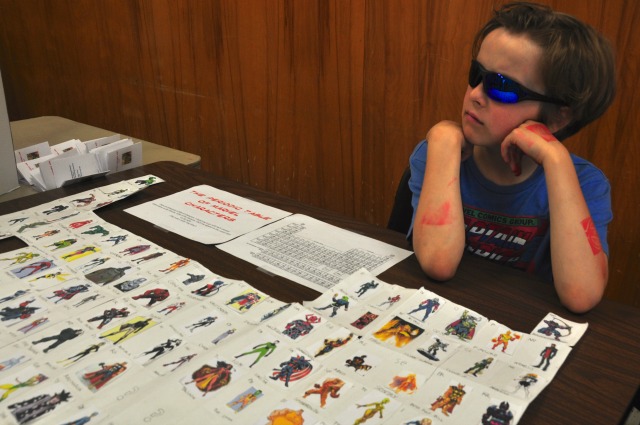 Comic books. In 2013 I learned about comic books. Surprisingly, there isn’t much to learn. Reading comics was much easier than my previous endeavors. But, daunted by the broad category that I had set upon myself, I decided to specify. Marvel comics was my go-to supplier of nonsensical entertainment (soon to be replaced by DC comics. Batbro > Spidernerds). But applying a civilian approach was not in my taste. So what graph could I use to display my interest in Marvel’s superheroes? Perhaps a picture of my favorite heroes and some of their stats? Maybe a marvelous drawing which displayed said heroes in action? Possibly some histories of the company and its publications? Nay, nay and nay (as Thor would say). I required the power of science. So I fabricated my magnum opus, a periodic table of Marvel’s heroes, villains, anti-heroes and everything in between. 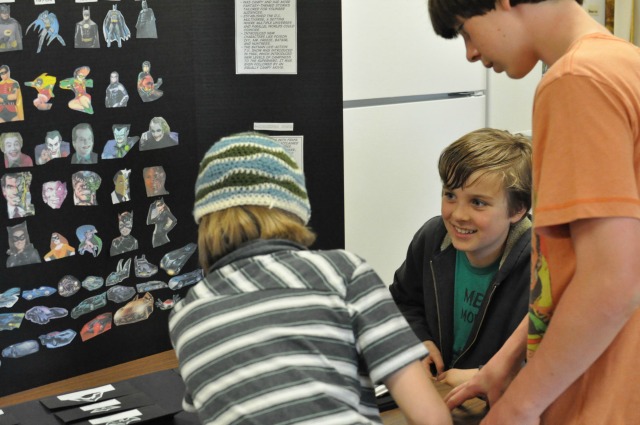 In 2014 I managed to dwindle my pool down from the universe, to comic books, to a specific comic book company and right on down to one singular character. But what a character indeed. Batman! The dark knight, the caped crusader, the world’s greatest detective. Yes, Batman, the greatest superhero of all (yes, that IS a fact). From masked, murderer with a gun, to campy space explorer, to gritty vigilante, to superhero, Batman had it all. Except superpowers. Those might be important.

Being an expert on the Dark Knight myself (I had read multiple comics, played some games, watched some television and seen the movies. The good ones that is), I assembled a timeline that showed the caped crusader and his archetypal sidekicks, villains and compadres as they adapted and evolved as time went on. I have since expanded and widened my repertoire of bat-knowledge. I’ve since read most comics and all games, shows and movies (even the bad ones. I’m looking at you Batman and Robin). But time was far too capricious for my tenderfoot novices, and being the quiz-lovers they were, I once again created a quiz for them to take part in. Here is a quote from one of the disciples that took part in my quiz: “It was cool I guess. Say, do you have one of those chocolate things?” 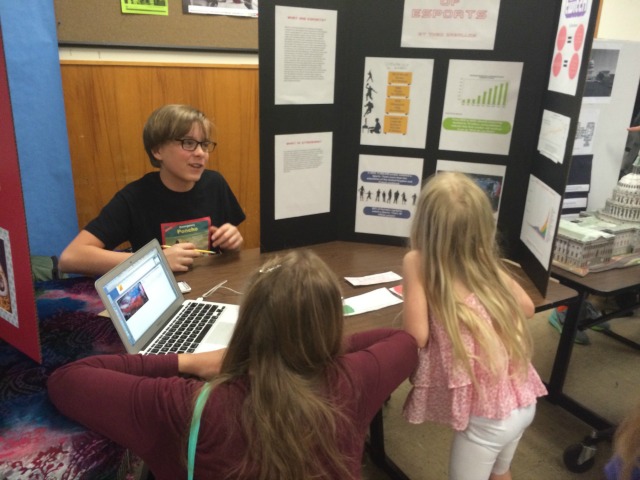 Okay, I suppose that’s not enough to go off of. In 2015 I enlightened the gibbering masses of annoyingly adamant adults and toothless toddlers about the wonders of virtual athletic entertainment. However, my words of wisdom fell on idle ears and a mere few were converted to the light side. (Okay, I don’t blame them that much, eSports is a pretty bad name. A lowercase letter before a capitalized one in the same sentence? Blasphemy. Madness.) But as the saying goes, “if people don’t believe that playing on computers isn’t athletic but driving cars and playing golf is, then they might be right, but because they disagree with me, they totally aren’t.” Or something like that. (Okay, I admit it, I made that one up. Don’t tell anyone. Shh.)

But because people don’t like their unfounded opinions to be shaken by glorious insight, I let them decide for themselves and do the voting on whether eSports are a legitimate sport. Results still prove to be inconclusive. No, I didn’t bribe the voters! Okay, maybe a few of them. 🙂

But my work was unfinished, and there was still more to be done. So, with the power of technology on my side, I produced a plethora of infographics to prove why I was right. In the photo above, I used these resources to convince some clearly unindoctrinated individuals of what they were missing. I didn’t find them spamming Twitch chat with kappas afterwards, so I suppose that was a failure on my part. (Sorry that you didn’t understand that reference, but believe me, it’s super witty.) 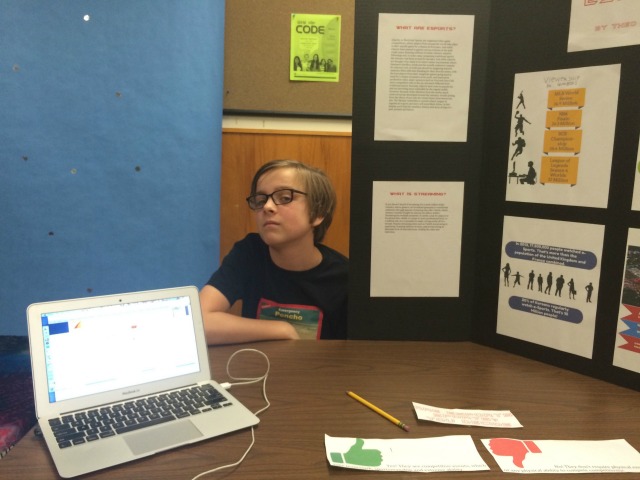